Tim Buntrock  Thu, Mar 15 2018Tue, Apr 3 2018  group policy, powershell  9
In this post, I will discuss a PowerShell script that helps you find and delete unlinked Group Policy Objects (GPO), also known as orphaned GPOs. Orphaned GPOs are not linked to any Active Directory sites, domains, or organizational units (OUs). This can cause various problems. Using PowerShell, it is easy to create reports of unlinked GPOs, back them up, and eventually delete them.

Tim Buntrock
Tim Buntrock is one of three enterprise administrators for the Active Directory service of a "global player" in the contact center business. He is a certified engineer for MCTS, MCITP, MCSA and MCPS.

Latest posts by Tim Buntrock (see all)
Contents of this article

Update: The method discussed in this post only works for GPOs that are linked to OUs because Get-GPOReport isn't able to handle Site-linked GPOs. Don't use the script if you have Site-linked GPOs!

Many admins extensively test GPOs before implementing them. Sometimes they simply unlink a test GPO instead of deleting it. Policies continuously change in most networks. If certain policies become obsolete, admins tend to just unlink them because the corresponding policies might become relevant again at a later time.

In my experience, this happens quite often, and many admins don't really care about unlinked GPOs. They just create new GPOs over and over again until nobody has any idea which GPOs are still used and which became orphaned years ago.

After years of changes, depending on the complexity of your environment, you may have hundreds or even thousands of unlinked GPOs. This leads to performance issues and messes up your GPO infrastructure. In can confuse adminsand lead to configuration errors.

Who wants to go through all these GPOs in the Group Management Console (GPMC) to find orphaned GPOs and delete them? Fortunately, PowerShell makes it relatively easy to automate the GPO cleanup process or just send notifications if GPOs become orphaned.

To find unlinked GPOs, we will use the Get-GPO and Get-GPOReport commands, which belong to the Group Policy module that is a part of RSAT. You can import the module with this command:

To retrieve all GPOs, we use the -All parameter and use Get-GPOReport to cast them to an XML object. We pipe the result to Select-String, which finds us all lines without "<LinkTo>".

The following command creates a list of all unlinked GPOs: 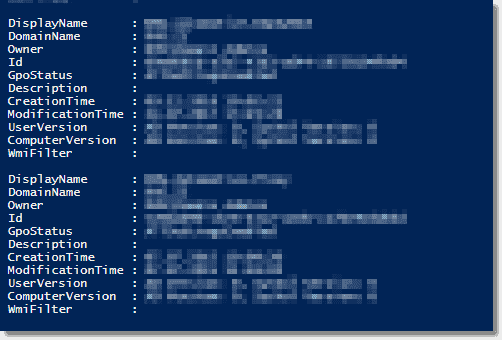 To log these GPOs to a text file, you just have to add this line after $_.DisplayName:

Because you might not want to delete GPOs before creating a backup, we need a variable for our backup location.

The next command creates the backup:

To create a report of unlinked GPOs, we have to use Get-GPOReport again. However, instead of using XML, we will set the ReportType to HTML.

As the last step, we delete those GPOs using the Remove-GPO cmdlet:

Let´s put all of these parts together. The only thing I added is a $Date variable to identify backups from different days. 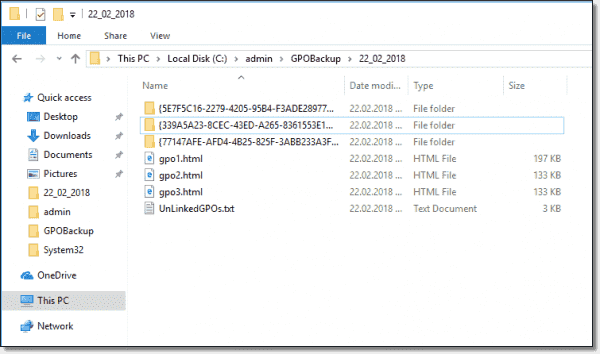 Example of GPO backup and reports

You can run this script as a scheduled task to automate GPO cleanup.

If you simply want to create a report without automatically removing GPOs, you can remove $_.Displayname | remove-gpo –Confirm from the command. You can then check your backup location to take a closer look at orphaned GPOs. You can also send e-mails that inform you about new, unlinked GPOs. This is accomplished with the Send-MailMessage cmdlet that I added at the end of the script.

I highly recommend cleaning up your Group Policy environment regularly to reduce complexity and simplify the work of Group Policy admins for your network. I hope my script helps you automate this task!

Leave a reply to Bernd Click here to cancel the reply