Export and import passwords in Firefox

Wolfgang Sommergut  Tue, Apr 26 2022Sat, Apr 30 2022  browser, password, security  0
Since version 80, Firefox has allowed you to import passwords in CSV format. This can be used, for example, to export passwords from Firefox and transfer them to another PC. If you format the data accordingly, you can also import them from other programs, such as password managers.

In principle, it is possible to synchronize passwords between Firefox instances via the cloud. However, if you hesitate to transfer your credentials for business applications to the cloud, then exporting and reimporting is an alternative.

Exporting credentials to a file ^

The function for saving the login data to a CSV file can be found in the settings under Passwords (the page can be reached directly via about:logins). There, click the three dots in the upper right corner, and then select Export Logins from the dropdown menu. 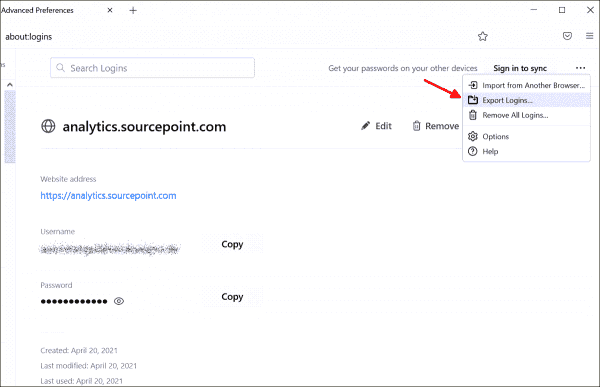 After confirming a warning and entering your Windows password, select the location where the browser will save the data.

Reimporting to another instance of Firefox usually requires a bit more effort because the import feature is disabled by default. To make it available, type about:config in the address bar. After confirming the displayed warning, search the page for

By default, this parameter has the value false. Click the toggle icon on the far right of the line to change it to true.

Enable function for importing credentials from a file

If you now go back to the passwords page in the settings, the menu from which you previously exported the credentials should have the command Import from a File. 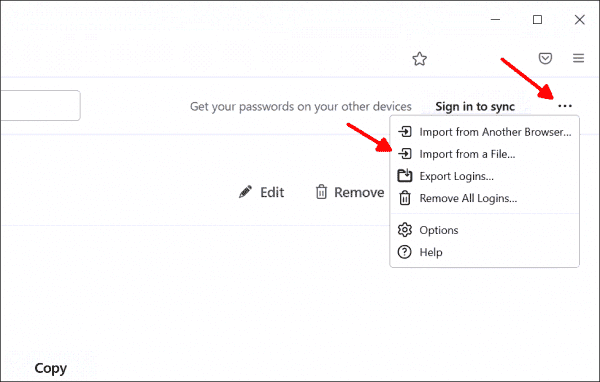 Execute the command to import credentials

The function will ask for the CSV file and import it. This import is smart enough to detect duplicates and thus avoids overwriting existing passwords.

If certain credentials already exist on the target computer, they will not be overwritten

After the successful import, remember to permanently delete the CSV file because it contains all passwords in plain text.