In September and October Alexander Weiss wrote a series of articles here on 4sysops around the technical aspects of deploying Exchange 2010 roles and migrating from Exchange 2003. This time around I thought we’d focus on the planning phase of a medium to large sized migration from earlier versions of Exchange to Exchange 2010.

Microsoft has offered for some time, and recently updated, the Exchange Server Deployment Assistant. It’s an online wizard that asks a series of questions about your current environment and in the end produces a customized check list with instructions for each step you need to take in your migration. These types of “design” questions are crucial in controlling how your environment will look and are similar to the concepts behind questions you’d encounter on an Exchange MCITP certification exam.

Planning is vital as email is “mission critical”; thus a large and possibly complex setup that’s going to be migrated needs precise planning. Whilst this tool doesn’t give you everything (it doesn’t cover all different combinations – yet) it’s a good starting point.

This fictitious company is a medium sized engineering / manufacturing business. Head office is in Germany, with smaller offices in the US and China; Company A has about 1200 employees. In 2004 their old Lotus Notes environment was successfully migrated to Exchange 2003 which has served the company well for the last six years. Company A is risk adverse and decided to skip Exchange 2007 but is now focusing on migration planning for an in house implementation of Exchange 2010 in early 2011. 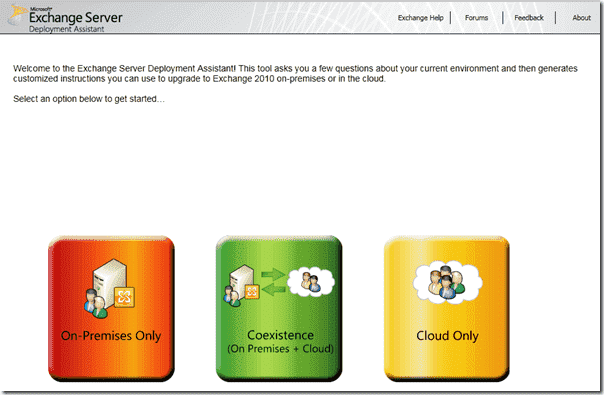 When you start the tool you’re faced with three options, On Premises Only, Coexistence (On Premises + Cloud) and Cloud only. Cloud only takes you to the Technet documentation site rather than further wizard pages, showing that this tool isn’t complete. Selecting the first button brings us to the option of which version we’re upgrading from, including an option where there’s a mix of Exchange 2003 and 2007 servers. Company A uses OWA (who doesn’t?) but with 1200 users and three offices the migration won’t happen over a weekend, they don’t have a disjointed namespace but they’d like to continue using their extensive public folder infrastructure, they’ll use a hosted messaging hygiene solution instead of the Exchange Edge role but they’re definitely looking to implement UM as it’s one of the drivers behind the Exchange 2010 project.

After these few questions are answered a 20 step checklist is presented with in depth recommendations for each step. This can be downloaded as a PDF or each step can be navigated online. 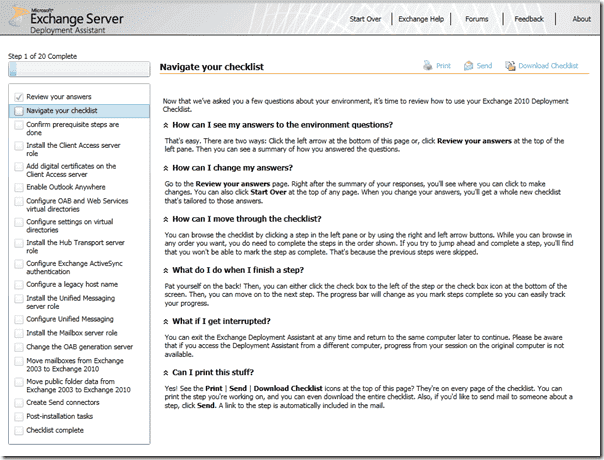 Each step features an introduction and explanation followed by detailed instructions and finally a part called “how do I know this worked?”.

This book publishing company has 5500 users, with a head office in Sweden and smaller offices spread all over Europe, Asia and the US. Currently running an on premise Exchange 2003 system they’re looking to move to the (Office 365) cloud. For a time (six to twelve months) they’re expecting a co-existence scenario whilst transferring each office and group of users to the cloud.

The questions here are different, Company B want on-premise credentials linked to the cloud; they’d like the same email domain for all users; all outgoing mail doesn’t have to go through an in-house server; free/busy calendar data should be shared amongst all users and a single URL should link to OWA for both cloud and on-premise users. Company B’s answers results in a 29 step list with detailed information on how configure an Office 365 and on-premise co-existence. 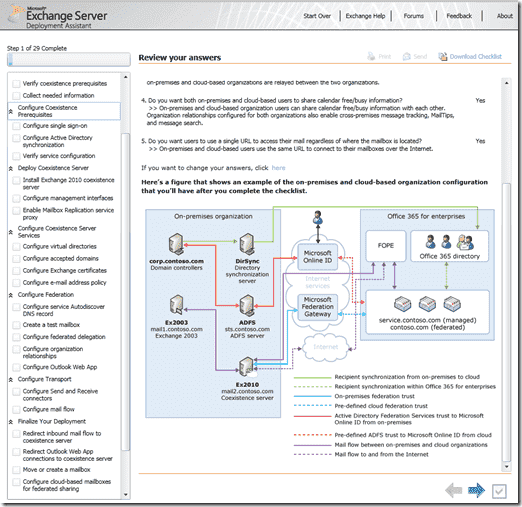 If your company or clients are looking at going to Exchange 2010 and / or the cloud make sure you make the Exchange Deployment Assistant the first step in your planning– it will help you tremendously with only a small investment in time.

Technet articles on how to plan for and deploy Exchange 2010, including migration documentation here.