Krishna Kumar  Fri, Feb 15 2013Thu, Mar 28 2013  exchange  6
Jetstress is an important Exchange tool that should be run on all Mailbox Role servers before Exchange is installed. Proper tuning of Jetstress will help you determine maximum disk subsystem throughput performance.

The disk subsystem is a very important design factor—as important as memory or CPU. Improper sizing can lead to a serious performance impact for end users. Disk sizing does not just mean sizing the disk for capacity; it also includes calculation of IOPS, or input/output operations per second performed on the disk subsystem. Exchange 2010 has changed the database architecture from having random IOPS to sequential ones. This architecture change has greatly reduced the IOPS utilization on disk. The higher the disk capacity, the lower the disk speed and disk IOPS performance are. Similarly, the lower the disk capacity, the higher the disk speed and disk IOPS performance are.

Below is the reference snapshot of selecting the Jetstress option to test the disk subsystem throughput. 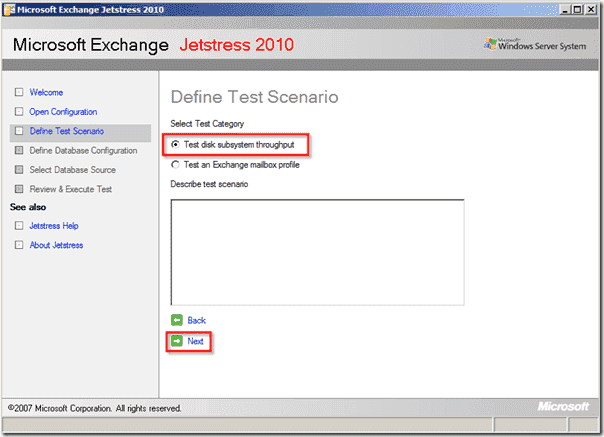 Based on the design calculation of 75 IOPS per disk, we can have around 214 users per disk. It would be ideal if we could get the expected IOPS as per the design. Actual performance may vary for different hardware vendors. To make sure that we have the right design to meet our requirement, we need to perform Jetstress tests on the disk system to determine the maximum throughput performance.

Jetstress can be executed in auto tuning mode or in manual tuning mode by providing a different thread count parameter. Thread count determines the number of transactional threads per database. Transactional threads include insert (40%), read (35%), update (5%), and delete (20%). Auto tuning, which automatically determines the maximum thread count that the storage can support, is not the ideal way to determine the disk throughput. 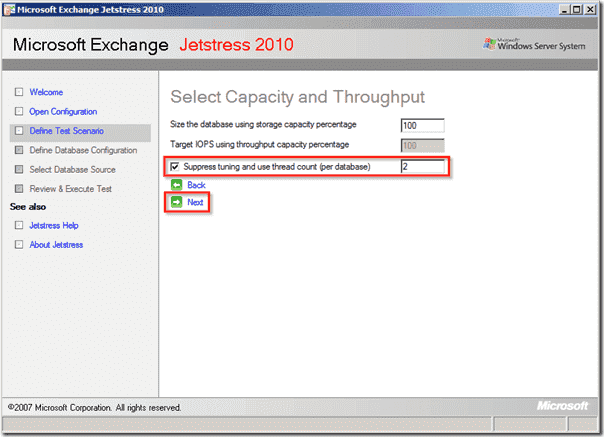 I hope you are now clear on how to find the maximum disk subsystem throughput performance and how to match this value with your design.