Krishna Kumar  Tue, Jul 30 2013Tue, Jul 30 2013  exchange  0
In my last post, I covered how Exchange 2013 protects itself from database and server failures and how it recovers if database and server failures occur. In this part, I will mainly talk about how Exchange 2013 provides site resilience in case of site failure and how to recover from failure.

In Exchange 2013, a client can receive multiple IP addresses from the DNS for a given “Fully Qualified Domain Name (FQDN)”. With this major change in Exchange 2013, every client’s requests are HTTP-based (for example, Outlook, Outlook Anywhere, and OWA). These clients are provided with multiple IP addresses for the destination, thereby providing a failover option at the client’s end. If an IP address fails, the client has one or more other IP addresses to use to connect. If the client tries to connect with an IP address and the connection fails, the client waits for about 20 seconds and then tries the next IP address in the list. Technically, automatic recovery should happen in 21 seconds (approximately).

Suppose you have intermittent failures of the load balancer where the device might be up and accepting requests but not really processing them. In this scenario, you may have to perform a manual namespace switchover by removing the VIP configuration in DNS. During this period, no client will try to connect to the primary datacenter VIP and instead will connect to the secondary datacenter VIP. After you replace the load balancer, you can add the VIP back to the DNS and the client will start using the primary datacenter VIP.

DAGs can also be protected from network failure or quorum loss by simply splitting the DAG between two datacenters (Active/Active) and then placing the file share witness server in the third datacenter so that it can be arbitrated by DAG members in either of the datacenters, regardless of the state of the network between the datacenters that contain DAG members. 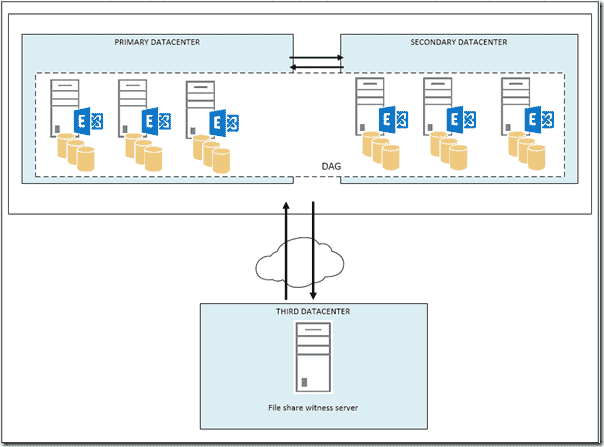 Exchange 2013 provides multiple options for HA and site resilience. Microsoft has tried to keep human intervention to a minimum and allow Exchange to recover itself from any kind of failures so that the administrator can focus on recovering the failed hardware or server rather than recovering the service.

I hope you now have a clear picture of the various types of failures and how to recover from them. Please comment, if you have any queries.