Evernote backup on a Mac to Dropbox

Home Blog Evernote backup on a Mac to Dropbox

Michael Pietroforte  Tue, Jan 9 2018Wed, Jan 31 2018  backup, office  4
With the tiny SyncAny for Dropbox app you can easily create a Evernote backup data on Dropbox and essentially any Mac application that stores data and settings in the Library folder.

Evernote is a wonderful application for taking notes and syncing them effortlessly between different devices. I switched from Microsoft's OneNote to Evernote a while back mostly because I find that Evernote's user interface is more thought through. However, ever since I switched I have an uncomfortable feeling because I don't have a continuous backup of my notes that is independent from the service provider.

You can manually export notes from Evernote, but that is not really a good solution. I almost lost very important notes when I accidentally edited a wrong note, thereby deleting my data. My manual backup from last week didn't contain these notes and I am using the free plan, so I couldn't restore a previous version of the note in Evernote.

I had the presence of mind to immediately disconnect my phone from the internet before Evernote had the chance to sync the modified note. Thus, I was able to restore my data. However, it occurred to me that I might not always be so lucky. And even if I used an Evernote plan that allowed me to restore a previous note version, I wouldn't want to rely on just one service provider for the backups of my important notes.

The main problem of Evernote and many other applications on the is Mac that they store all their data in the Library folder. Some applications allow you to change this folder in their Preferences. In these cases, you can redirect the data to a Dropbox folder or another cloud drive. Unfortunately, Evernote does not have this feature.

I first thought I sync the Evernote database to Dropbox, but in my search for a sync solution, I found SyncAny for Dropbox which, despites its name is not really a sync tool. The tool simply creates aliases in your Dropbox folder that can point to any non-Dropbox folder on your Mac. The advantage over a real sync solution is that you don't waste local disk space by duplicating data. I have several applications that store their data in the Library folder and even though my Macbook has a 1TB SDD I am continuously running of disk space.

Using SyncAny for Dropbox is quite simple. You just add the folder that you want to sync to Dropbox and you are done. The tool automatically replicates the directory structure of the source location. Thus, in case you have to restore data, you can easily find the correct location. The rest is of the backup procedure is done by Dropbox. By the way, the advantage of Dropbox over other free cloud drives is that you can restore previous file versions which is essential for any backup solution. 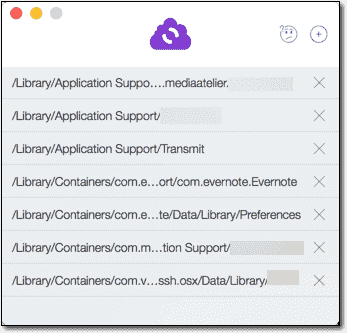 SyncAny for Dropbox is a simple app

It took me a little to find the correct folders that contain the Evernote database and its settings. The problem is, you can just sync the entire com.evernote.Evernote folder in /Users/<UserName>/Library/containers because it contains many aliases to other Mac folders. When I first tried this with another app, Dropbox started to sync my Download folder which is not really what I intended.

After experimenting a while, I found two folders that are essential for Evernote:

Note that I only work with text notes in Evernote. If you store images or other data in Evernote, you might have to add additional folders. You should find them at this location:

Also notice the aliases in this folder are irrelevant and you should not sync them to Dropbox because otherwise half the data on your Mac will end up on Dropbox. You can distinguish aliases in Finder from folders by the little dot in the icon. 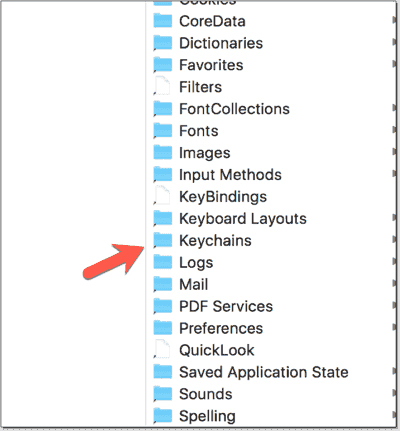 The dot indicates an alias

You can use the procedure I described for any Mac application that doesn't allow you to choose the location of its database or settings. You essentially only have to search in the Library folder for the application's name. Note that some applications create several folders and you sometimes have to test a little until you find the correct folder. And always watch out for aliases!

By the way, another app I couldn't live without anymore is quite useful here: Default Folder X. Once you found the folder in Finder and you then want to add it to SyncAny for Dropbox, you simply click the Finder symbol in the Default Folder X extension of the file dialog window and you are done. Default Folder X costs $34.95 but it is absolutely worth its money. You can easily locate previously used files and folders from any Mac app. It saves me countless clicks every day. Trust me, if you have a Mac, you need this tool! 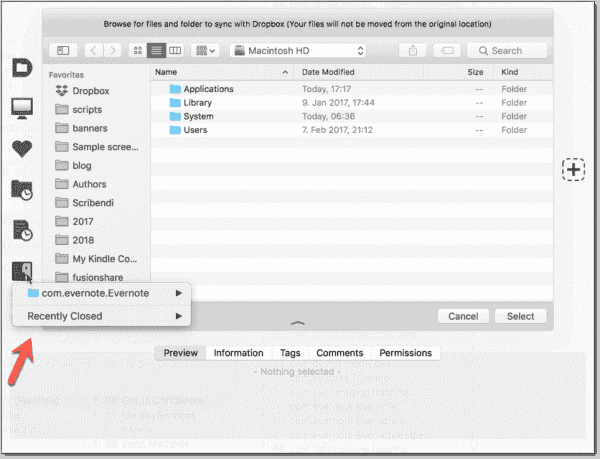 Opening a folder with the help of Default Folder X

Speaking of money, SyncAny for Drobbox is not free either. However, it only costs $2.99 and it is certainly also worth it. You can sync any folder to Dropbox that you can't directly store in the Dropbox folder.

As a final note, when you backup data, you always have to ensure that the restore works. If you want to test this with Evernote, you first have to close the app and then copy the backup from your Dropbox folder to another location. Then you rename /Users/<UserName>/Library/Containers/com.evernote.Evernote, so you still have all your data (just in case). If you then open Evernote again, it will recreate the folder and ask you to login. You then close Evernote and restore the data from your previously created copy. If you then open Evernote again, all your data should be back.