Nano Server in a nutshell ^

Microsoft has played with the user interface quite a bit over the years. Windows Server 2008 gave us the Server Core option. Windows Server 2012/R2 introduced Minimal Server Configuration, as well as the ability to switch GUI layers without reinstalling the operating system.

The reason for all three of those points is the fact that all supported Windows Server roles and features live off-box. In other words, you have to manually install the available workloads:

As of January 2016, Windows Server 2016 TP4 includes a radically different Nano Server to what we had in previous builds. Let’s install an on-premises Nano Server virtual machine and see what’s new and what’s changed.

I downloaded the Windows Server 2016 TP4 ISO from the Microsoft Evaluation Center. From an elevated Windows PowerShell session, I’ll next mount the DVD image to my Windows 8.1 workstation’s file system:

Next, I’ll (a) create a folder for the Nano VM on my C: drive; (b) switch my PowerShell session’s focus to that location; and (c) copy the two PowerShell scripts (technically one module and one script) from the mounted ISO to our C:\nanoserver working directory:

Let me explain what I did with that previous one-liner:

I use Oracle VM VirtualBox on my workstation, so I created a virtual machine and attached my new C:\nanoserver\nanoserver.vhd virtual hard disk to that VM. 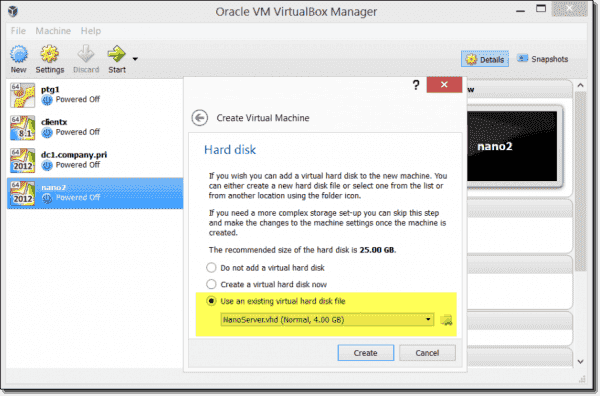 At the 2015 Ignite conference, Jeffrey Snover told me he wanted the Nano Server local display to display You can’t do that! and do nothing else. That statement underscored Jeffrey’s strong belief that servers should not support either GUIs or local logon unless absolutely necessary.

Microsoft must have received a good deal of customer feedback on this issue, because Nano in Windows Server 2016 TP4 includes (limited) local administration support. For instance, this is what you see when you boot a Nano Server:

I specified a local administrator password earlier when I ran New-NanoServerImage, so I’ll supply that here. The VM is not part of a domain, so I’ll use the server’s nanoserver hostname in the Domain: field. Drum roll please… Here’s the Nano Server Recovery Console: 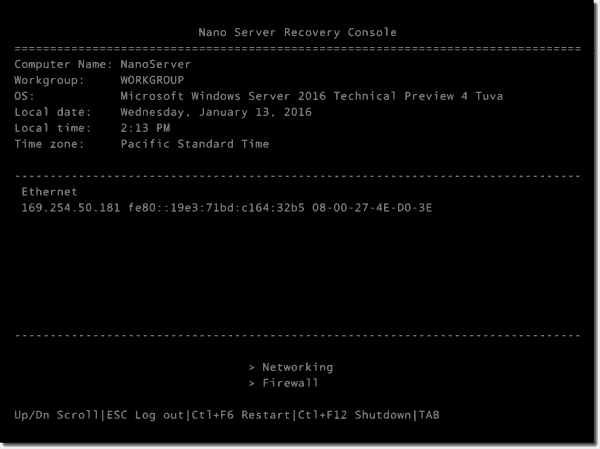 Follow the keyboard navigation instructions at the bottom of the screen. For instance, press TAB and ENTER to switch to the Networking page, and then press ENTER a second time to see your NIC details: 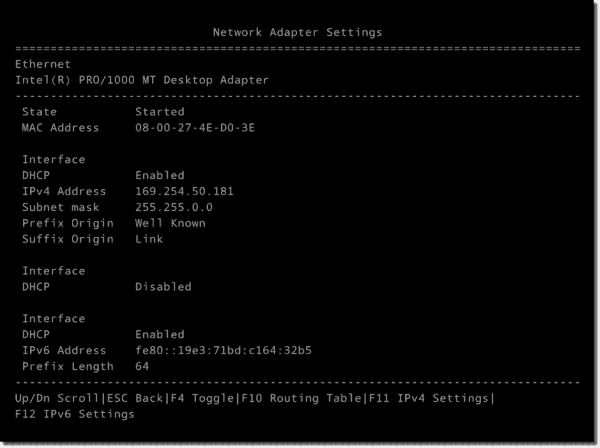 Next, I’ll press F11 and then F4 and give my Nano Server a static IPv4 configuration: 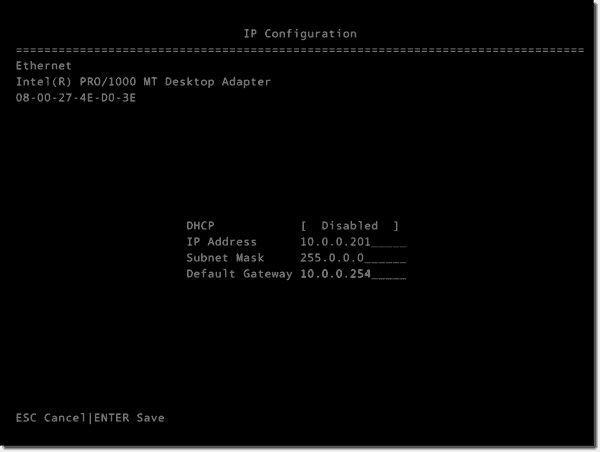 Press ENTER to save and ESC to move backward through the navigation screens. I might be missing something, but I was unable to discover how to change the hostname, system time zone, and so forth from the Nano Recovery Console. It’s a safe bet to say that those features simply aren’t implemented yet.

The bottom line is that Nano Server was developed to be administered remotely. Period. End of sentence. So, to that end, I brought up a second virtual machine, this one running Windows Server 2016 TP4 with the full GUI, and placed it on the same network subnet as our Nano Server box. 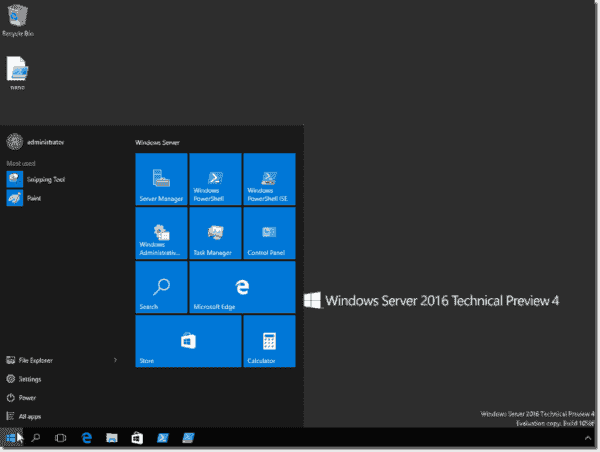 I fired up an elevated Windows PowerShell ISE session on my GUI server. I’ll start by creating a credential object to store the Nano Server VM’s local administrator username and password. Admittedly, this is a hacky approach, but I’m not concerned with security in my development environment.

Because I’d like to disconnect and reconnect to my Nano Server session at will, I’ll create a persistent PSSession object:

Let’s get a run of the services included in a “vanilla” Nano Server build:

We’ll cover domain join in another article. In the meantime, I want to finish up today by teaching you how to inject feature packages into a Nano Server VHD. I stopped my nanoserver VM and moved the NanoServer working directory to my Windows Server 2016 TP4 box. Sadly, you need the “latest and greatest” DISM version (from the Windows ADK) to inject features into Nano, or even to use native PowerShell commands such as Add-WindowsPackage.

Let’s start by firing up an elevated PowerShell session and mounting NanoServer.vhd to the file system:

Next, we’ll list the available packages from our Nano Server working directory (these were copied from the Windows Server 2016 TP4 installation media earlier when we built our Nano Server VHD):

Why don’t we inject the IIS package so Nano can host web content? We use Add-WindowsPackage to make that happen:

After we dismount our VHD image, we can restart our Nano VM and we’ll be in business!