Wolfgang Sommergut  Mon, Jul 6 2020Mon, Jul 6 2020  virtualization, vmware  11
With the release of vSphere 7.0, VMware as usual shipped a free version of the hypervisor. The most important changes include the hardware support and the disk layout of the ESXi drive. The limitations of the free version remain unchanged from the previous version.

The innovations of the major platforms for x86 virtualization are less related to the hypervisor any more, but rather to management functions or, most recently with vSphere 7, to support for containers. Hence, there are only few technical advances in the free version of ESXi.

In the past, the vSphere Hypervisor has always benefited from the increased scalability of the paid product. However, a comparison of the configuration maximums of ESXi 6.7 and ESXi 7.0 shows that there has been no progress in this area.

vSphere 7 added support for NVMe over Fibre Channel and NVMe over RDMA. This technology should also be available in the free version, although VMware does not officially document this anywhere.

No more support for older CPUs ^

For the next-generation processors of the Sandy Bridge family, the ESXi setup already warns that they will no longer be supported in the future. 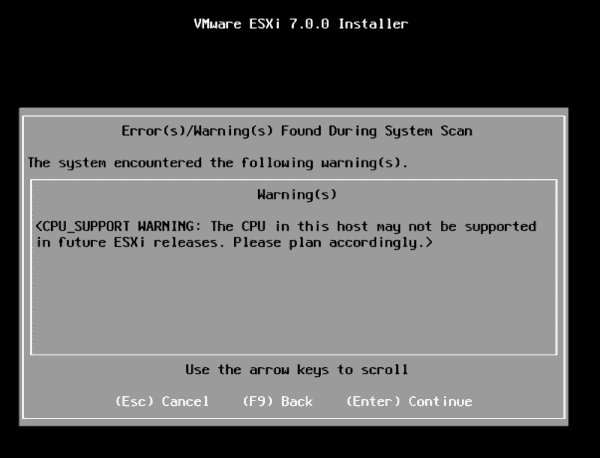 If you use such hardware in your lab, you can still install ESXi 7 on it via the boot option:

The message mentioned above will then be bypassed during the setup or the subsequent boot process.

The still popular NIC Intel E1000 may cause problems during installation. For example, ESXi 7 can apparently not find this network adapter on Intel NUC computers. But recently, an updated driver has been published, which is available as a VIB and which you have to integrate into the installation media yourself.

You will also encounter this problem if you want to update an older version of the hypervisor to ESXi 7 in a VMware Workstation virtual machine. There, ESXi 6.x typically uses E1000 as a vNIC, which will block the upgrade to version 7. 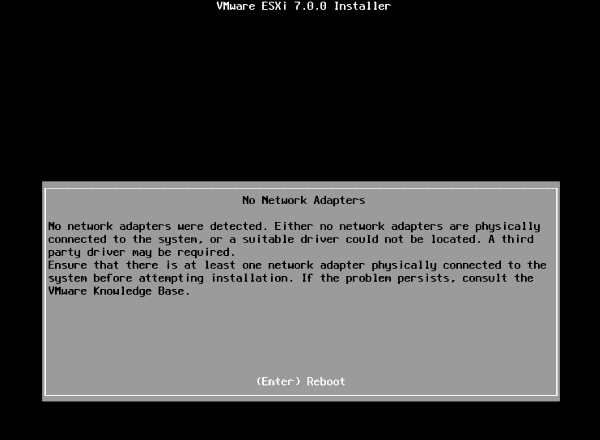 If a nested ESXi 6.x on a VMware Workstation uses an E1000 as the vNIC, the update to ESXi 7.0 fails

However, virtual hardware can be fixed quite easily by replacing it with another one. In the VMX file of the VM, change

With regard to nested virtualization, VMware blogger William Lam has provided the latest version of Nested ESXi Virtual Appliance for those who want to install ESXi 7 in a virtual machine. It enables setting up a virtual vSphere environment on an ESXi host much faster.

An innovation that can only be discovered by looking under the hood is the changed layout of the boot drive of ESXi 7. VMware reduced the number of partitions to four. 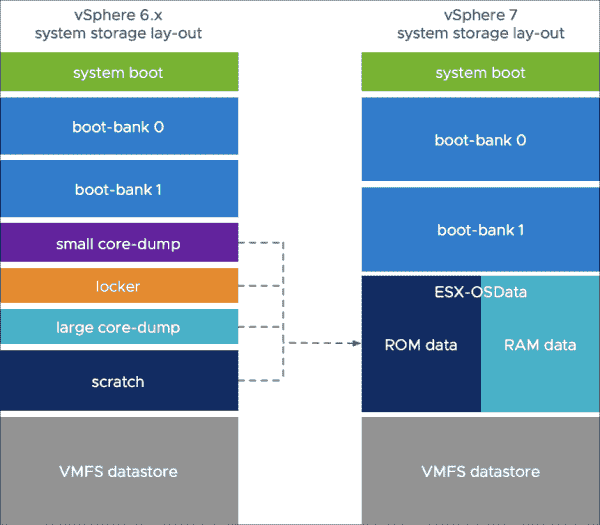 ESXi 7.0 uses a new layout for the boot drive

The boot medium must be at least 8 GB for USB or SD devices; for HDDs or flash drives, the minimum size is 32 GB. If it is larger than 128 GB, the setup will automatically create a VMFS datastore.

The web console has been shipped with the hypervisor since ESXi 6.0 Update 1 and is therefore available immediately after installation via the URL: 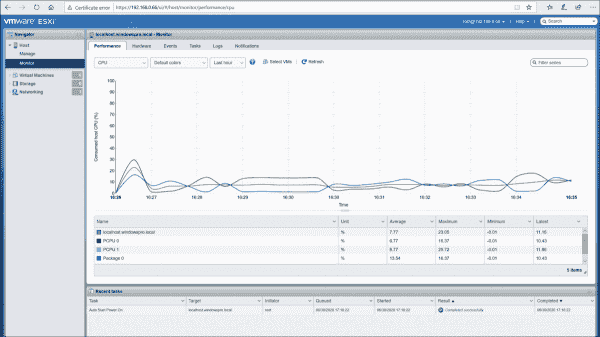 Most of the tasks for configuring and operating the host and the virtual machines can be carried out from there. However, some tasks must be performed from the ESXi console (DCUI) or shell, such as adjusting basic network settings like the DNS server or hostname.

Via this web GUI, you also enter the license key that you received when you downloaded the ISO file. The corresponding option can be found under Host > Manage > Licensing > Assign license.

As with most free editions of software in general, the vSphere Hypervisor is a functionally slimmed-down product. One of its biggest limitations from the beginning has been that it cannot be managed through vCenter, so each host must be managed separately. As a result, you cannot form a cluster with ESXi 7 Free; consequently, features such as HA or DRS aren't available.

In addition, VMware has deactivated the vStorage API, which means that virtual machines cannot be backed up using standard backup programs.

However, since VMware recently introduced a limit of 32 cores per CPU for the paid version, this should also apply to ESXi Free. Within VMs, the maximum of 8 vCPUs remains. 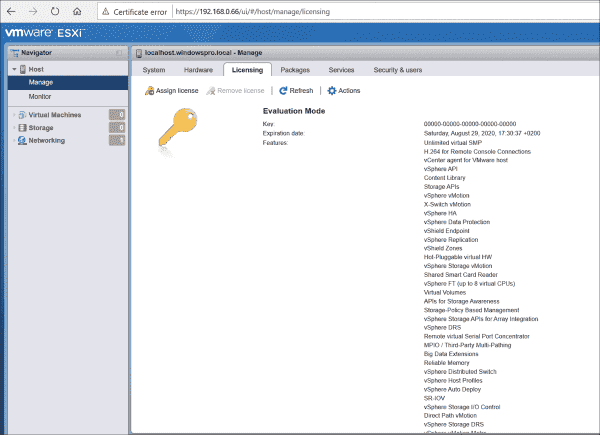 In the evaluation phase, all features of the full version are available for two months

These restrictions only come into effect after you enter the license key of the free version. However, there is no need to rush in lab environments because the vSphere Hypervisor runs in evaluation mode for 60 days after installation.

During this time, all features of the Enterprise Plus Edition are available. The free license is permanent and has no expiration date.