Kyle Beckman  Tue, Mar 15 2016Sat, Apr 2 2016  security  2
When planning your organization’s security strategy, there are a number of different tools available.  Once such tool is Microsoft’s Enhanced Mitigation Toolkit (EMET) to protect applications from new and emerging threats. In this article, I’ll cover EMET’s protections, system requirements, and other useful information about the tool.
Contents

The Enhanced Mitigation Experience Toolkit, or EMET for short, is a free security tool from Microsoft that is designed to protect software from undiscovered or zero-day exploits that may not have security fixes yet and/or are able to slip past other system protections. EMET, like other tools, can’t protect against 100% of threats, but gives IT departments another tool to protect against attacks and protect corporate networks. When implementing your endpoint security plan, you should definitely consider adding EMET to supplement tools like regular/scheduled patching, antivirus, AppLocker, and other security tools. 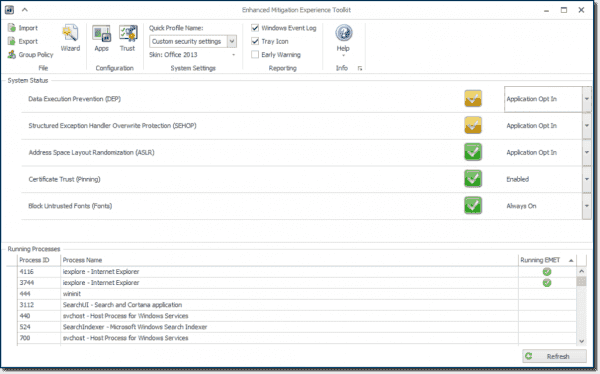 Released in late January 2016, EMET 5.5 is the latest version of the tool as of the writing of this article. This version includes support for Windows 10, along with a number of other new features:

Are there risks using EMET?

Yes, some applications may use functions that are explicitly blocked in mitigation rules that you’ve created in EMET, which will lead to applications closing unexpectedly. You’ll definitely want to test applications with any new mitigations you’ve configured before mass deployments of new rules to ensure that applications don’t break once new EMET rules are applied.

The short answer is, it depends.  The EMET Team at Microsoft recently discussed the built-in mitigations in Windows 10. EMET can be used for providing CFG (Control Flow Guard) protections for third-party applications that are not compiled with that feature enabled. CFG analyzes and discovers indirect-call instructions within applications.  A check runs before indirect calls within an app, and closes the app if the code tries to run an unexpected indirect call. If you have apps that were compiled without CFG – which many of us do – EMET allows you to provide that functionality to the app without your developers having to recompile the app or complicated conversations with your app vendors.

Microsoft Edge, the new web browser for Windows 10, includes improved sandboxing and memory management. Because of these improvements, EMET mitigations are not necessary for Microsoft Edge.

In my next post I will describe how you can install EMET.