Two-factor authentication (or 2FA in short) provides an extra layer of security because, in addition to a username and password, it requires you to enter a temporary one-time code, which is usually generated in an authenticator app installed on a mobile device.

I will use Ubuntu Linux and the Google Authenticator app on a smartphone to generate a time-based one-time password (TOTP). You can use the same idea to enable 2FA on any other Linux distro and use any other authenticator app instead of Google.

To create a temporary admin user, run the following commands: 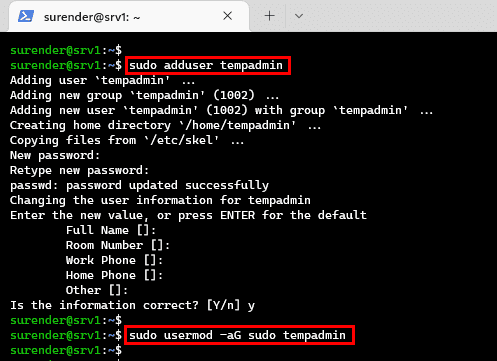 Once you successfully confirm that the 2FA setup is working as expected, delete this user.

Before enabling 2FA, it is really important that the clocks on your Linux system and mobile device are synchronized, which means that both should have the same time in their clocks. However, a nominal time difference of a few seconds (e.g., 30 seconds or less) is usually acceptable.

The best way to keep the time synchronized is using the network time protocol (NTP). By default, Ubuntu uses timedatectl/timesyncd for time synchronization, and we will stick with the default. To verify whether the NTP service is enabled and the system's clock is properly synchronized, use the timedatectl command. 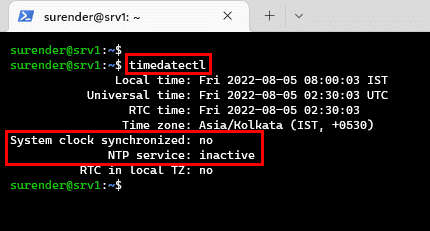 If you see System clock synchronized: no and NTP service: inactive, as shown in the screenshot, run the following command:

This command enables the NTP service and synchronizes the system's clock. Now repeat the timedatectl command once again and confirm that the output is as shown in the screenshot. 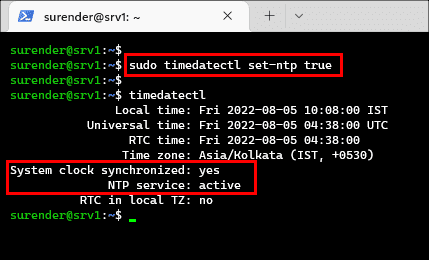 Enabling the NTP service and synchronizing clocks in Ubuntu Linux

You will notice that the system clock is now properly synchronized. Similarly, you can also set your mobile device to use a network-provided time instead of manually setting it.

After synchronizing the clocks on your Linux system and smartphone, head over to the Linux console and run the following command to install the Google Authenticator PAM packages: 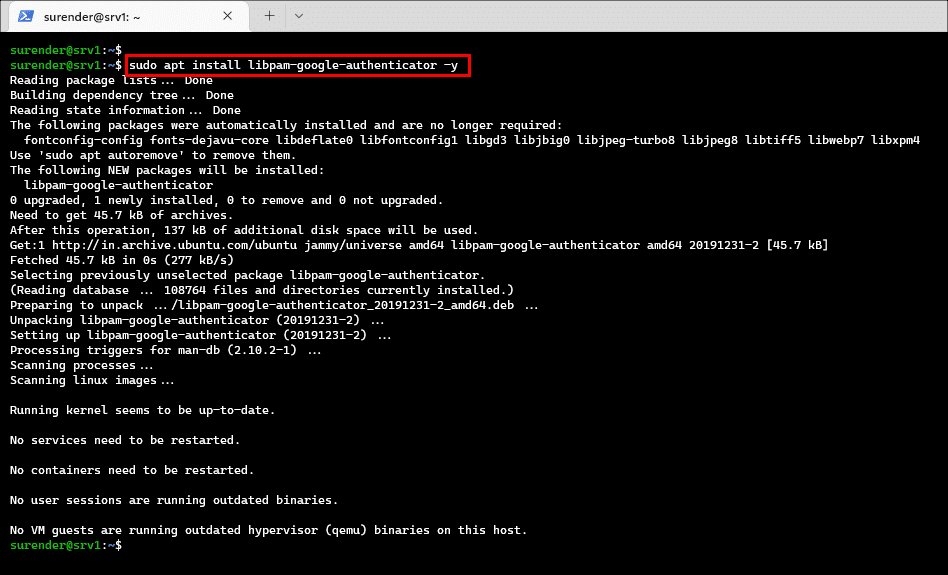 Install the Authenticator app on a mobile device

Add the Linux system to the Authenticator app

Now run the Google Authenticator app on the mobile device. Click the Get started button, and you will see two ways of adding a device: 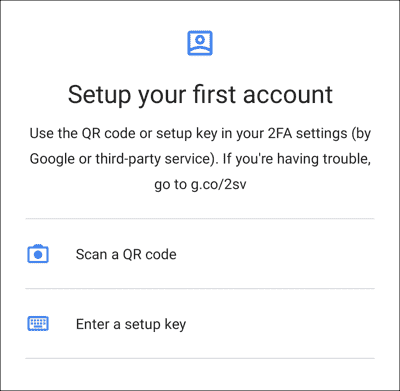 Getting started with the Google Authenticator app

In the Linux console, run the Google Authenticator package you installed earlier on your Linux server. By default, it stores the secret key in the user's home directory (in ~/.google_authenticator file), but we will save it in ~/.ssh directory. If ~/.ssh directory doesn't already exist on your Linux system, simply use the ssh-keygen command to create it before actually running the next command. Now run the following command in the Linux console: 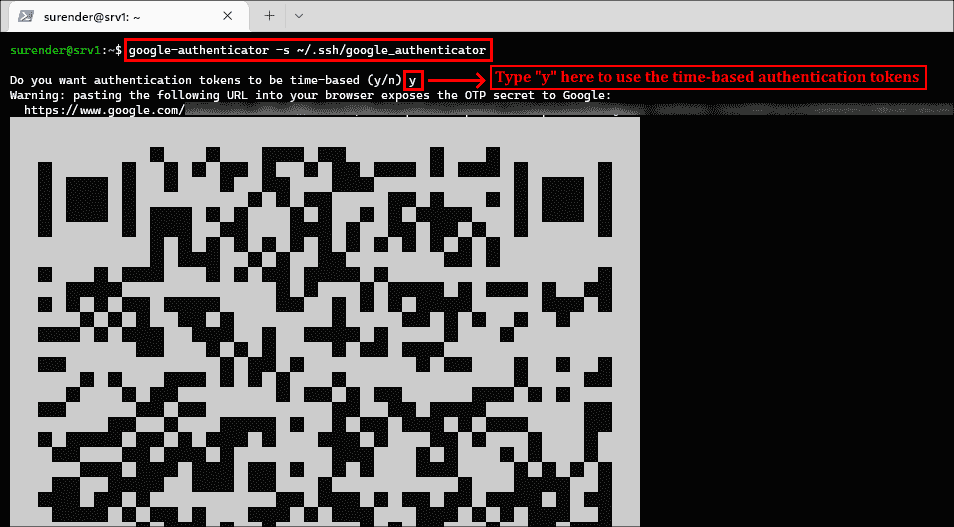 This command will run the Google Authenticator PAM module. The -s option allowed us to save the secret key in a nonstandard location, and we specified the ~/.ssh directory where SSH keys are kept. When you run this command, you will see a QR code on screen if QR code libraries are supported. Now open the Google Authenticator app in your mobile, tap the Scan a QR code option, and scan the QR code displayed on the Linux server console.

Once your account is added to the Authenticator app, type the TOTP from the Authenticator app in the Linux console and press Enter. When the code is confirmed, you will see the emergency scratch codes (or backup codes) displayed on the Linux console. Store these backup codes in a safe place, as you might need them to get your SSH access back if something goes wrong with your phone in the future. Furthermore, you will be prompted by a series of questions during the setup. Make sure you answer these questions, as shown in the screenshot: 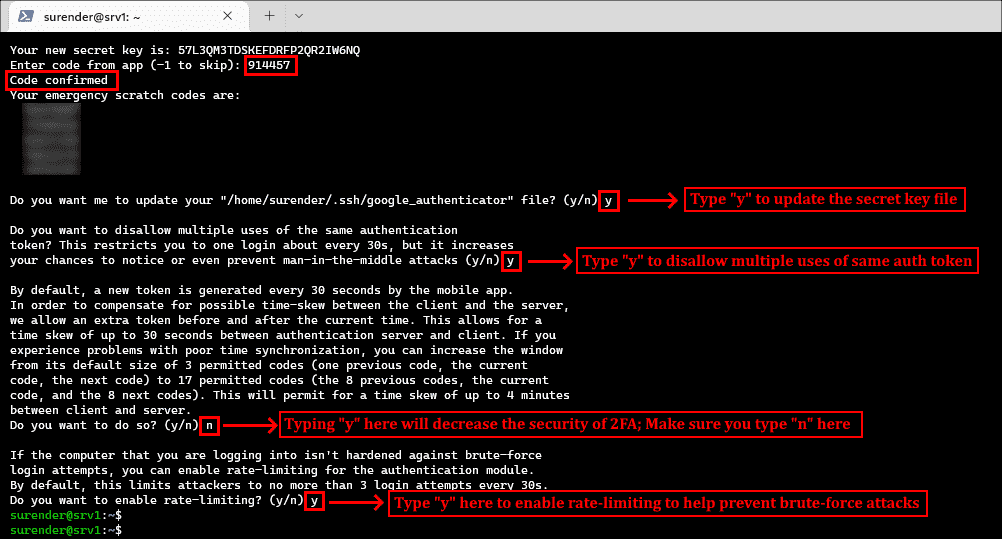 The next step is to modify the PAM configuration file for the SSH daemon (/etc/pam.d/sshd). Run the following command to open the config file: 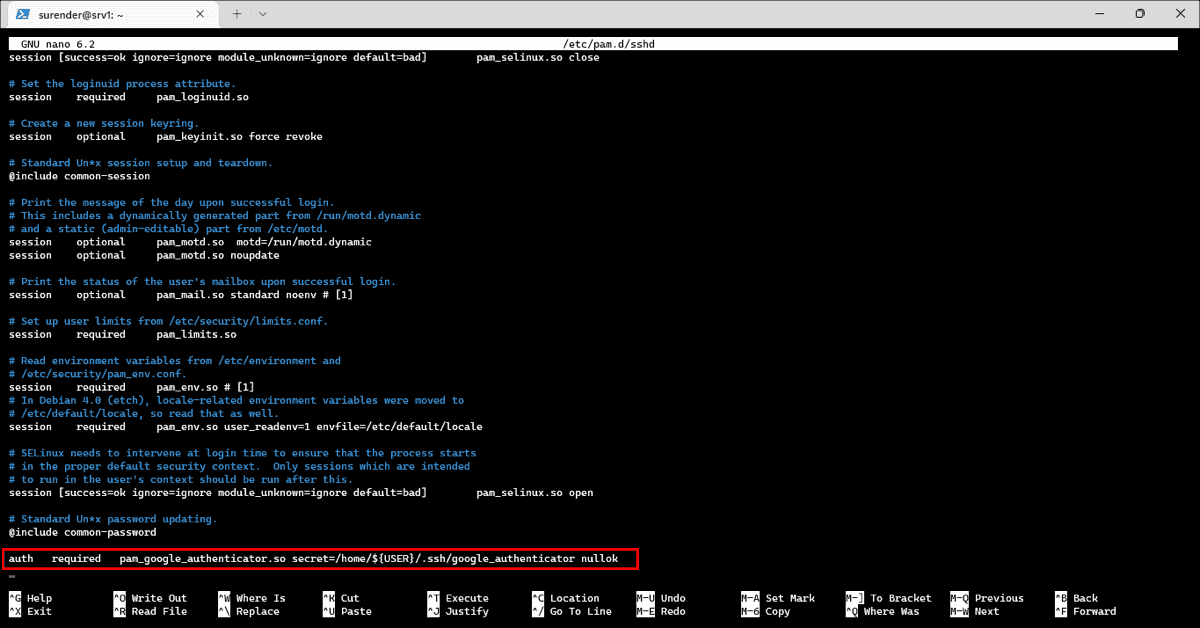 Modifying the PAM configuration file for the SSH daemon

Notice how the path of the google_authenticator secret key is supplied using secret=/home/${USER}/.ssh/google_authenticator. If you store your secret key file in a different location, make sure you supply the correct path here. Also note that the nullok option will allow users to log in with just the username and password until they complete the 2FA setup. Once the 2FA configuration is successfully completed for all users, it is a good idea to remove the nullok option to enforce the use of 2FA for everyone. If you are the only user on this system, you can skip adding the nullok option.

In either case, if the suggested line already exists in the sshdconfig file, make sure you uncomment it and change it to "yes". By doing so, you're essentially enabling keyboard-interactive (or challenge response) authentication for the SSH daemon. See the following screenshots for reference: 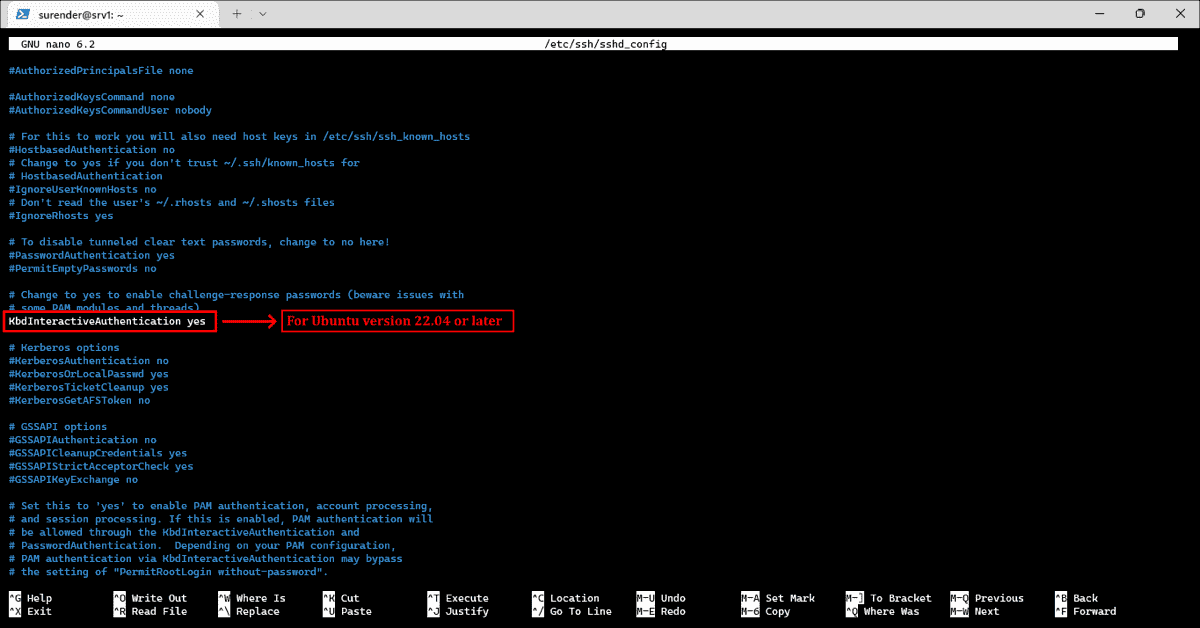 Enabling keyboard interactive authentication for SSH in Ubuntu 22.04 or later 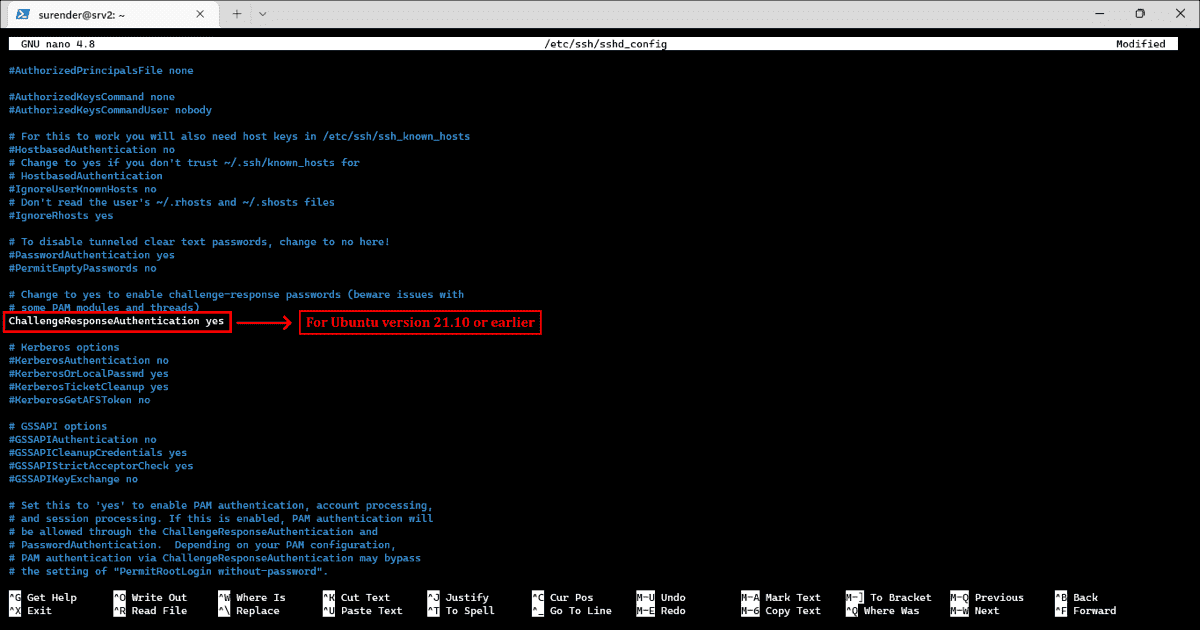 Enabling challenge response authentication for SSH in Ubuntu 21.10 or earlier

Make sure you don't close the current Linux console session until you confirm the 2FA setup is properly working. If you close this session and 2FA doesn't work, you might get yourself locked out. If this happens, you need to log in with the temporary admin user we created earlier.

At this point, your Ubuntu Linux system is ready with two-factor authentication. To verify if everything is working, launch a new terminal, and try to access the Ubuntu system using SSH. Assuming you already have an SSH or console session open to your Ubuntu system, you can run the sudo tail -f /var/log/auth.log command to view the SSH access logs at the same time.

Alongside, open a new SSH session to the Ubuntu system, and you will notice that after entering your username and password, you will now be prompted for a Verification Code (see the screenshot below). 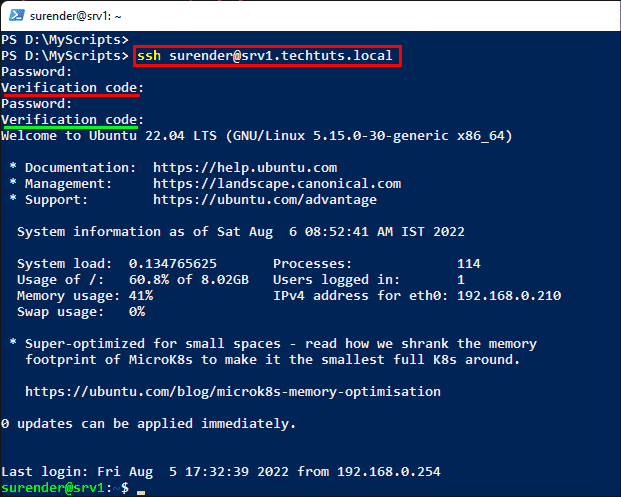 This is it. The SSH access on your Ubuntu Linux system is now protected with 2FA.

The above steps enabled two-factor authentication for SSH access using password authentication. If you are using public key authentication and want to protect it with 2FA, open the /etc/ssh/sshd_config file again and add these lines at the end: 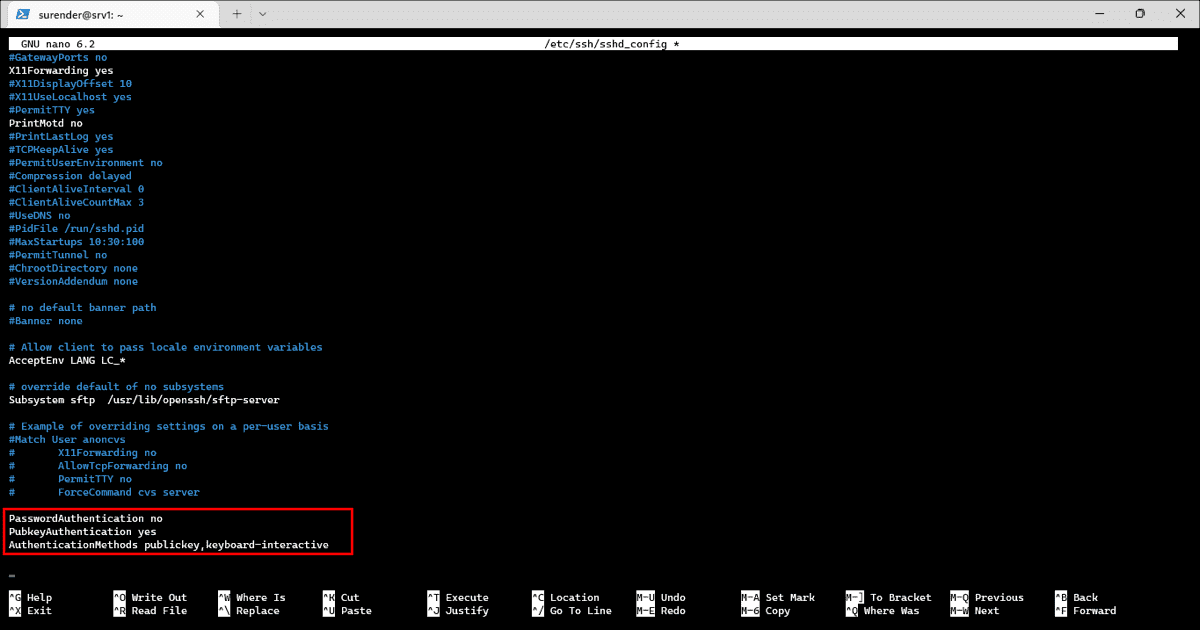 If you can't access the Linux system using SSH, make sure you followed all the steps correctly, and the clocks on both the Linux server and the mobile device are properly synced. If the clock on your Linux system is properly synced using NTP, but you still see an invalid verification code in the SSH logs, the problem is most likely with the time synchronization on your mobile device. Follow these steps to fix it:

That was it for this guide. You just learned how to enable two-factor authentication for SSH login in Linux. When 2FA starts working properly, don't forget to delete the temporary admin user that we created at the beginning, and make sure you disable root login via SSH to further improve the security.