Before jumping directly into the configuration, let me first briefly cover some background information. As an enterprise-class database product, SQL Server supports encryption-at-rest using transparent data encryption (TDE), but in this post, we will focus on encryption-in-transit using an SSL/TLS certificate.

SQL Server has long supported SSL encryption, but due to various vulnerabilities in the earlier versions of the SSL protocol (e.g., SSLv2, SSLv3, and TLSv1.0), Microsoft eventually stopped supporting SSL and announced the support of TLS 1.2 back in January 2016. Since then, Microsoft has recommended using TLS 1.2 for encryption with all versions of SQL Server (including older versions, such as 2008, 2008R2, 2012, and 2014).

To enable encryption, we will install a Transport Layer Security (TLS) certificate on SQL Server, configure the SQL Server instance to use this certificate, and enforce encryption so that communication between the SQL Server and the client application is always secured. Once encryption is forced, beware that SQL Server will start rejecting client connections that do not support encryption. Thus, it is important that you first try these steps in a development or staging environment to avoid downtime of your production system.

Purchase a certificate from a trusted CA

Generate a self-signed certificate with PowerShell

For demonstration purposes, we will use PowerShell to generate a self-signed certificate. To do so, launch an elevated PowerShell console on the SQL Server host, and run the following command:

Make sure you specify the right name to match your SQL Server with the -Subject parameter. The optional -DnsName parameter specifies a comma-separated list of subject alternative names (SANs). This command generates a self-signed certificate and saves it in the local computer store. Beware—the self-signed certificates are susceptible to man-in-the-middle (MitM) attacks, so it is highly recommended to obtain a valid certificate from a trusted public certificate authority if you're setting up encryption on a production SQL Server.

Once you have the certificate installed, you need to bind it to the SQL Server instance. To do so, follow these steps:

If you're using SQL Server in a clustered environment, you need to follow these steps on all SQL Server nodes. You also need to make sure that the SAN field includes the virtual network name of the SQL Server instance. Your SQL Server is now ready to accept encrypted connections.

Now that you have configured your SQL Server instance to force encryption, it will accept only encrypted connections. However, you also need to configure your client applications to support the encrypted connection. To do so, modify the connection string in the application's web.config file to include Encrypt=True, as shown in the screenshot below:

To get additional help with this, speak to your application developer.

In SQL Server Management Studio (SSMS), you can modify the Connection Properties, as shown in the following screenshot: 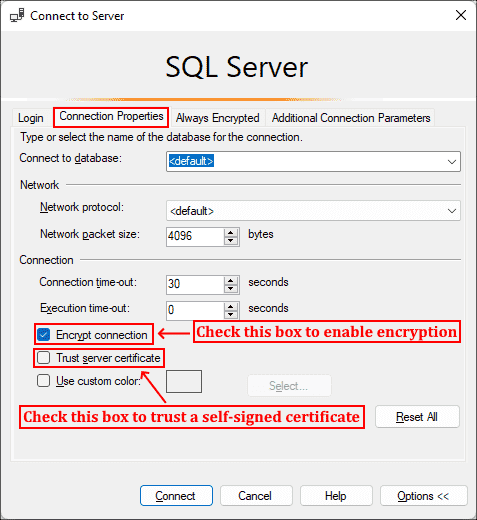 Let's discuss some errors that you may encounter and how to fix them.

If your SQL Server database service won't start after following the above steps, the SQL Server service is most likely running under a custom (managed) service account. In that case, the service account won't be able to load the certificate due to insufficient permissions on the private key, and you will see this error message in the Event Viewer:

The corresponding event ID in the Event Viewer is 26014. 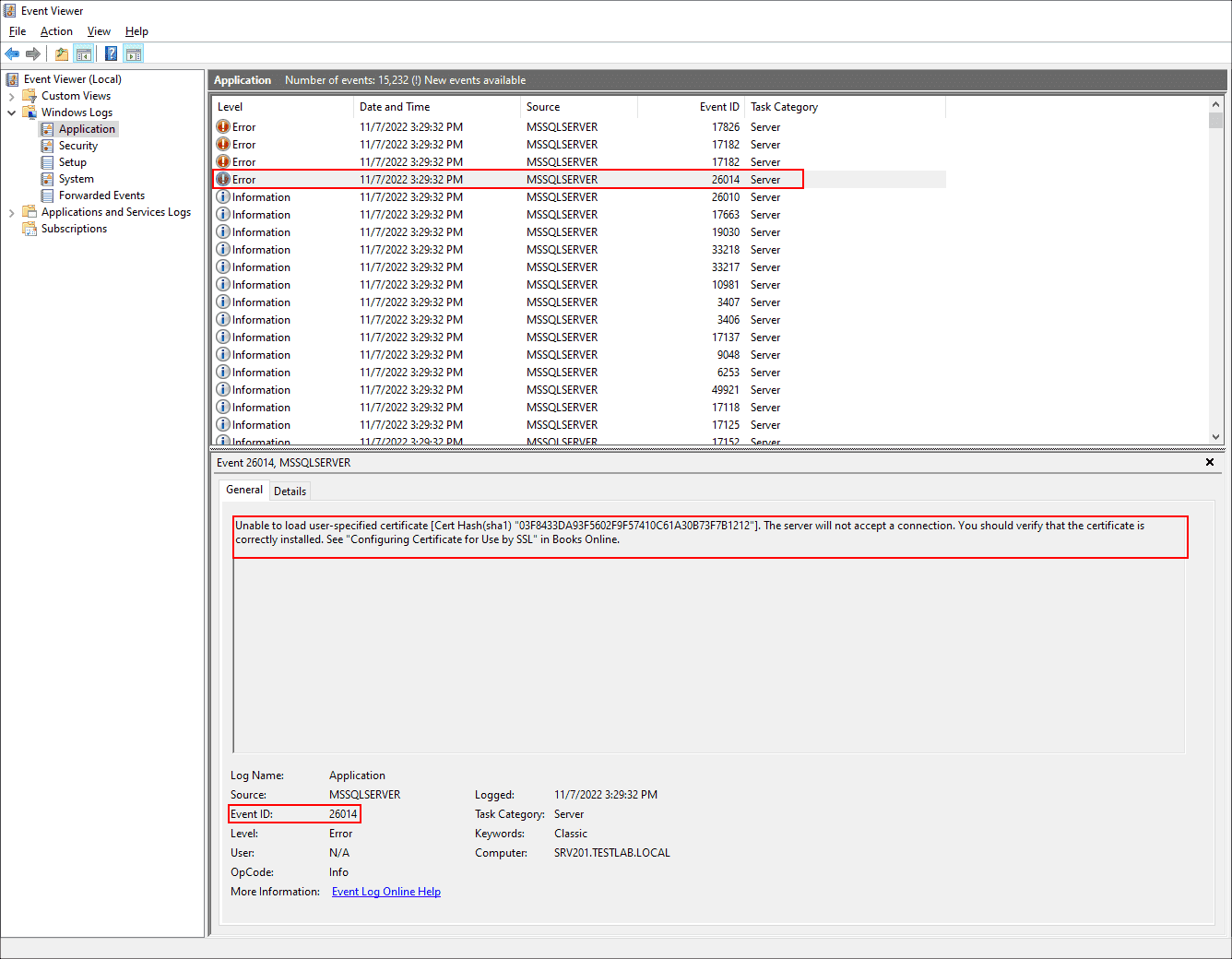 Event ID 26014 Unable to load user specified certificate. The server will not accept a connection.

If you used a self-signed certificate with SQL Server, you will likely see the following error in SSMS:

A connection was successfully established with the server, but then an error occurred during the login process. (provider: SSL Provider, error: 0 - The certificate chain was issued by an authority that is not trusted.) (Microsoft SQL Server, Error: -2146893019) 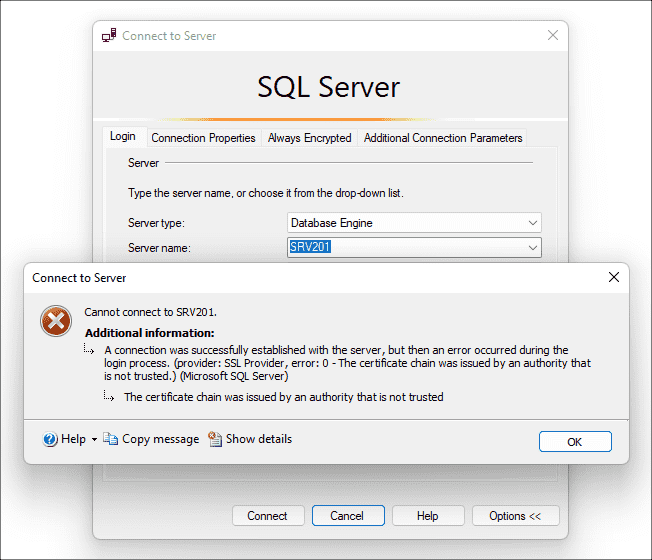 The certificate chain was issued by an authority that is not trusted. Microsoft SQL Server error 2146893019

To fix this error, you can select the Trust server certificate option in Connection Properties in SSMS. Again, it is highly recommended to use a valid certificate from a trusted certificate authority to avoid such errors and minimize the potential risks of man-in-the-middle (MitM) attacks.

A connection was successfully established with the server, but then an error occurred during the login process. (provider: SSL Provider, error: 0 - The target principal name is incorrect.) (Microsoft SQL Server, Error: -2146893022) 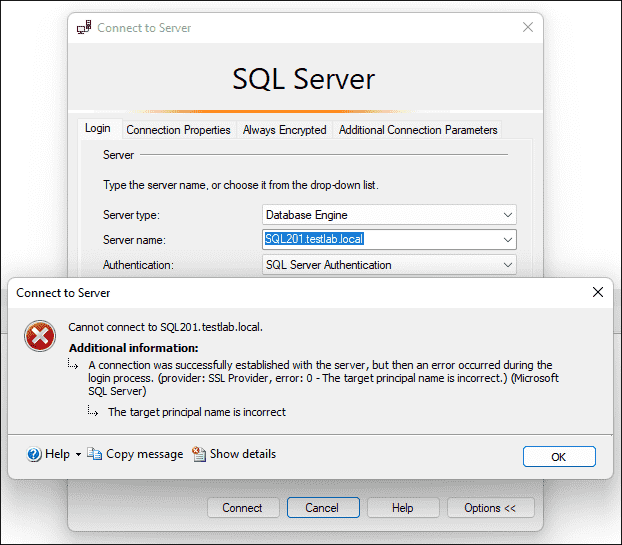 The error occurs because the name of the SQL Server that you're trying to connect to doesn't match the common name (CN) and also isn't available in the list of subject alternate names (SANs).

To fix this error, you need to regenerate the TLS certificate and include the principal name under DNS Name in the SAN. If you used a PowerShell command to generate the certificate, use the -DnsName parameter to add all the alternative names. The SAN field should list all the DNS names, as shown in the screenshot: 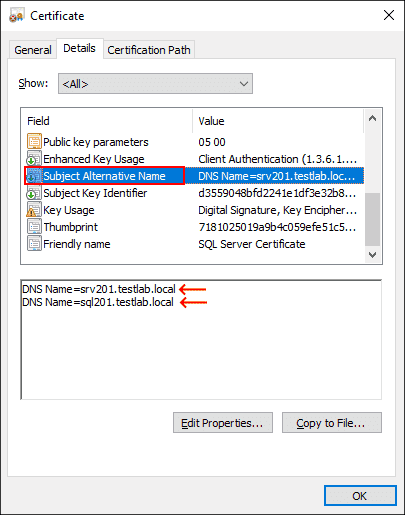 Viewing the subjects alternative name field of the certificate

Verify that TLS encryption is working

Now, you might be wondering, how would I know if communication between my SQL Server and client application (e.g., SQL Server Management Studio) is really encrypted?

To determine this, you can execute the following query in SSMS:

It returns a Boolean value (either True or False), where True indicates that the connection is encrypted. If you have the SQL Server PowerShell module installed, you could also use the Invoke-Sqlcmd command, as shown below:

Alternatively, you could also use a packet sniffing tool like Wireshark to verify that the connection is encrypted.