The last time I reviewed EMCO Ping Monitor for 4sysops was around this time in 2017, when the product reached version 6.0. Today we'll look at version 7.0, which is in preview as I write in mid-May 2019.

If you aren't yet familiar with EMCO Ping Monitor, it is a Windows-based client/server monitoring solution. As the product title suggests, the tool uses Internet Control Message Protocol (ICMP) to track system availability and provide alerts and reports to administrators.

I will focus on the Enterprise Edition’s new features for this review. Let's begin! 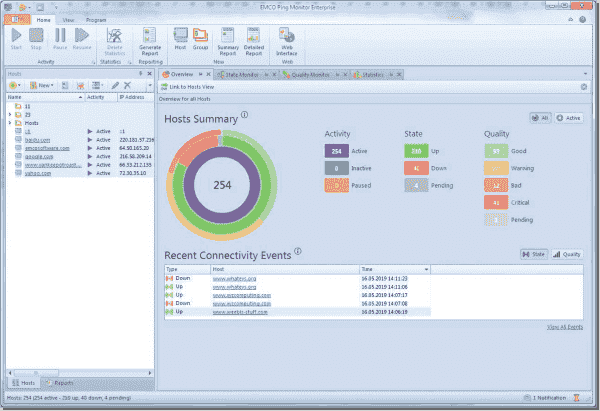 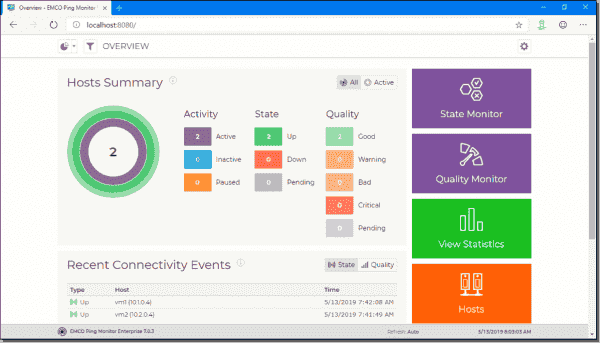 EMCO tells me that while there remain tasks that only the desktop GUI can accomplish (for instance, adding hosts, tuning global settings), the web UI is otherwise near feature-complete.

The good news here, naturally, is that you can access the web console from wherever you are instead of having to log into your administrative workstation where you have the GUI console.

EMCO also said that many of their customers run Ping Monitor in their control room; this use cases requires that technicians can see the connection status and quality of all (potentially hundreds or thousands) of hosts.

To that point, you can display the State Monitor and Quality Monitor views in a full-screen display with no browser "chrome," perfect for quick reference from a large wall display.

Speaking of the EMCO Ping Monitor desktop admin console interface, EMCO reorganized it to make monitoring workflow more intuitive and information packed. As you can observe in the next figure, the UI separates into these tabs: 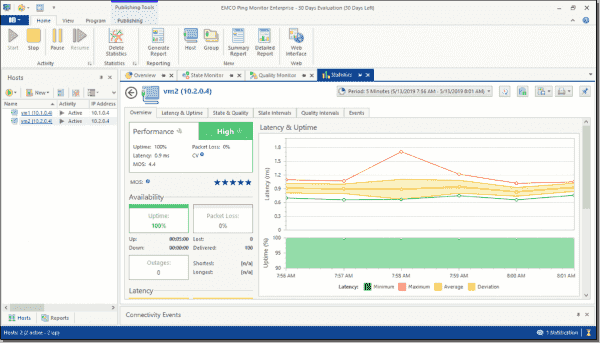 Therefore, you can now simultaneously check managed host availability state and connection quality. The next screen capture shows you the Quality Monitor interface. 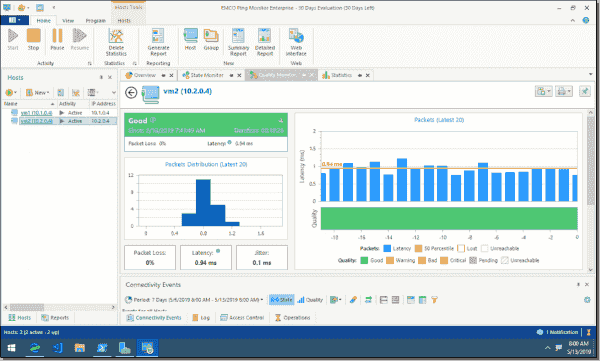 EMCO Ping Monitor v7 tracks connection quality history, so you can easily correlate connectivity disruptions with other environmental factors. Charts display all this data, which the monitor can export into HTML or Adobe PDF format.

Any infrastructure monitoring platform worth its salt needs to support notifications (alerts) to save us busy administrators from having to remember to check the logs each day!

EMCO Ping Monitor has always supported e-mail-based notifications. However, v7 can alert you to various connection quality metrics besides traditional connection failures. The next screenshot shows you the appropriate screen from the application's Preferences dialog box. 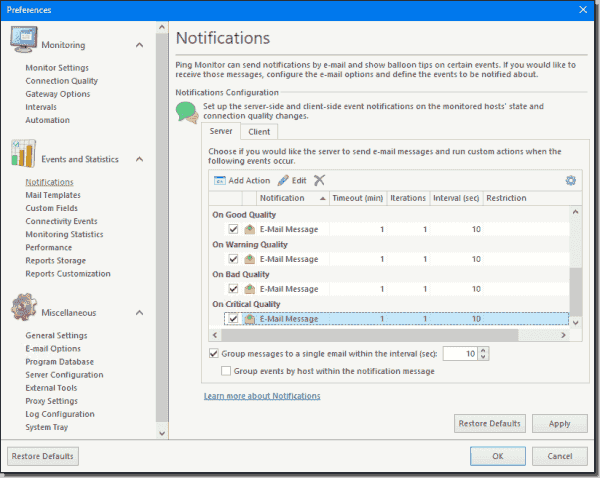 You can customize the behavior of each notification metric, specifying threshold triggers and day/time restrictions when you allow notifications. Here, let me show you the interface: 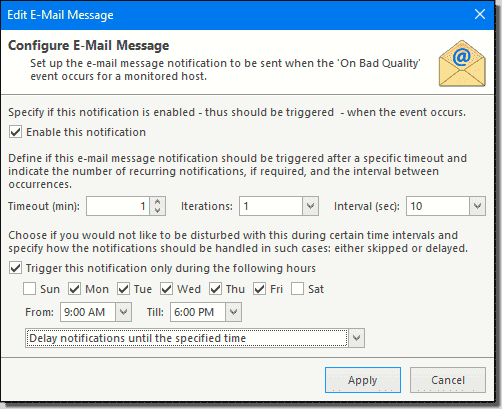 All the dashboards, charts, and tabular data visible in the EMCO Ping Monitor desktop and web management consoles are great. However, what if you need to report only on, for instance, ping latency values for one or more hosts in a simple, exportable/importable format like comma-separated value (CSV)?

Version 7 has you covered! The EMCO Ping Monitor desktop console sports a new Export Raw Data toolbar button that walks you through a report wizard and generates the CSV file. The next figure shows you a typical result. 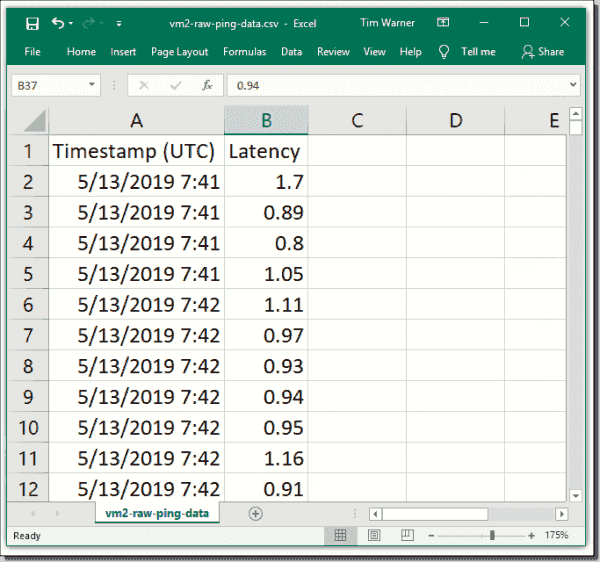 My test network is tiny--only two hosts. You should understand that EMCO Ping Monitor was written for enterprise scale. To illustrate this point, take a look at the following two interface screenshots that depict EMCO Ping Monitor with a more realistic host pool: 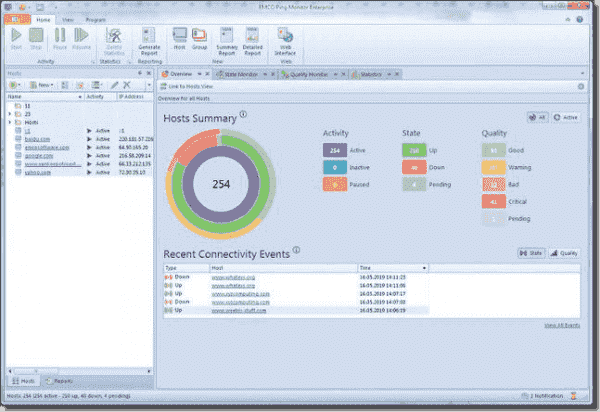 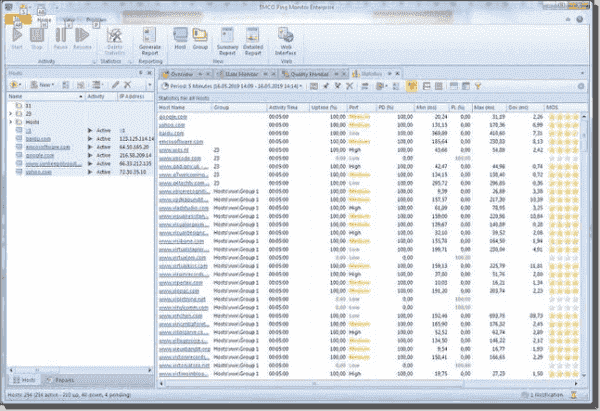 Statistics for an enterprise class deployment

Between version 6.0 and 7.0, EMCO made quite a few improvements to its product. Read its What's New webpage to get up to speed on those enhancements.

In summary, if your business needs convenient, scalable access to your managed hosts' TCP/IP connectivity data, then I invite you to consider EMCO Ping Monitor.

If you're an existing customer, I'd recommend you consider upgrading to v7.0, if for no other reason than for the expanded web management console. I believe that EMCO will eventually retire the desktop app and move to a 100-percent web portal paradigm.

If you haven't tried EMCO Ping Monitor yet, download the free trial. Make sure to check out the documentation, and let us know what you think of the product in the comments!