Mohammed Raffic  Fri, Sep 29 2017Fri, Sep 29 2017  virtualization, vmware  7
DRS affinity and anti-affinity rules help Distributed Resource Scheduler (DRS) perform better placements of virtual machines by understanding the application dependencies and availability. In this post, I will show you how to create affinity and anti-affinity rules in the vSphere Web Client, and I will give some real-world examples.
Contents

The Distributed Resource Scheduler (DRS) will automatically balance the virtual machines (VMs) in the vSphere cluster based on resource usage. Most of the time, DRS does its job perfectly. But because DRS is not aware of applications running on the VM and its dependencies, we need to help DRS optimize the placement of VMs on ESXi hosts in some cases. Affinity and anti-affinity rules can help define the limitations and constraints when it comes to moving VMs.

You can create a VM affinity rule to place a specific group of VMs on a single ESXi host. When you are running a multi-tier application, for instance a web server, an application server, and a backend database server, those three tiers communicate intensely. If the tiers are on different ESXi hosts, this will result in heavy network traffic between the hosts.

To improve performance, we can create an affinity rule to ensure the multi-tier application always resides on the same ESXi host. If you manually move a VM, DRS considers the affinity rule and migrates the other two VMs to the same host, or it moves the manually moved VM back to the original host. When providing recommendations, vSphere DRS considers performance optimization.

DRS migrates the VM according to affinity rules if it is in automated mode. When DRS is in partially automated or manual mode, it only offers recommendations to migrate a VM to comply with the affinity rules.

Log in to vCenter Server using the vSphere Web Client. Select the vSphere cluster where you want to create VM affinity rules and then click Configure -> VM/Host Rules -> Add. 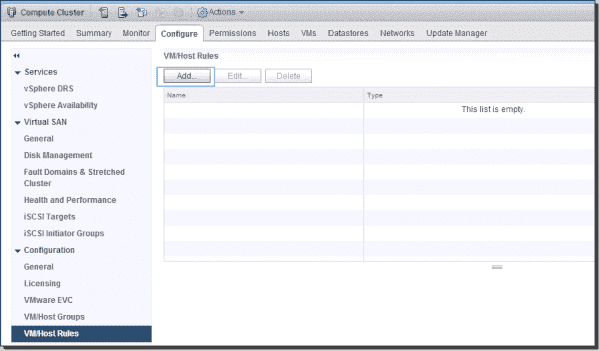 Create a VM affinity rule in the DRS Cluster

Specify the name for the anti-affinity rule, select Keep Virtual Machines Together from the Type drop-down, and click Add. 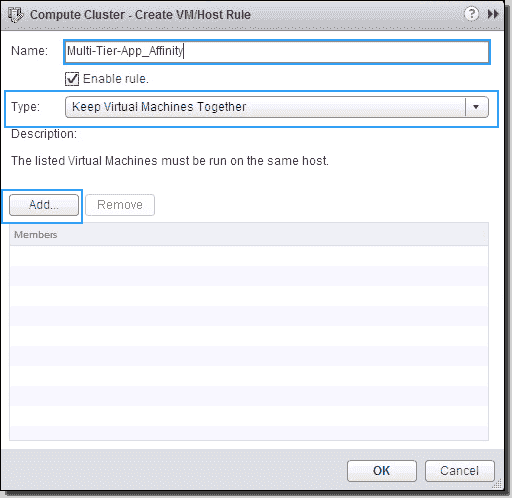 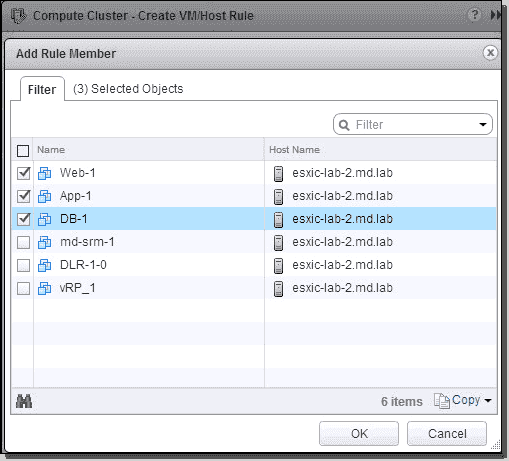 Ensure the Enable Rule checkbox is selected. Click on OK. 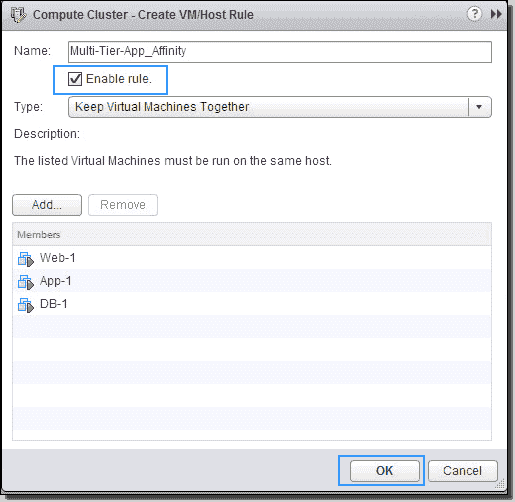 Enable the affinity rule in the DRS Cluster

This will create the affinity rule. You will be able to see the created rules under the VM/Host Rules section of the vSphere cluster.

VM placement on ESXi hosts after the DRS affinity rule

I tried to migrate one of the multi-tiered application VMs (App-1 in the screenshot above) to a different ESXi host manually. DRS automatically started the migration of two other VMs (DB-1 and Web-1) to the same host to comply with the affinity rules. Even in a second attempt, DRS migrated back the manually vMotioned VM to the same host. 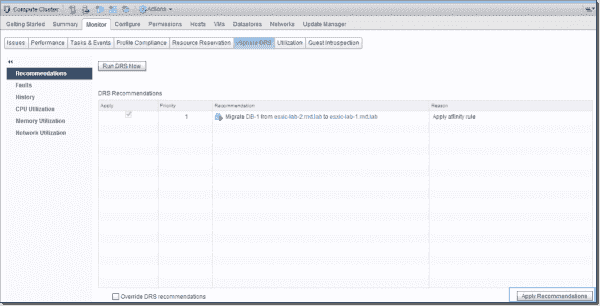 Anti-affinity rules are just the opposite of affinity rules. You can create an anti-affinity rule to place a specific group of VMs across multiple hosts by separating each VM in the group to run on a different ESXi host. This will improve redundancy. 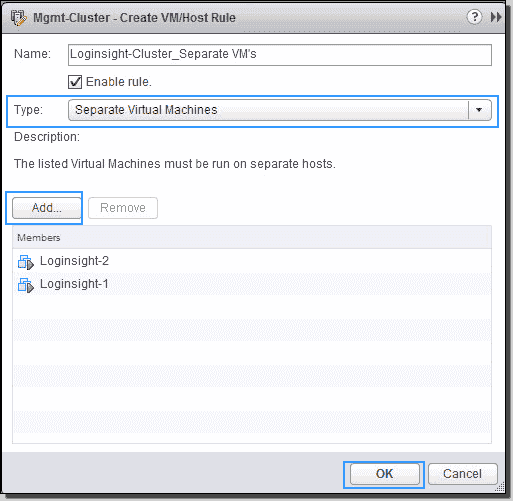 Create a VM anti affinity rule in the DRS Cluster

After creation of the anti-affinity rule, DRS migrates the VMs to separate ESXi hosts to comply with the rule.

Note that if your configuration violates DRS rules—say you have three nodes in your cluster but only two ESXi hosts—an error message will appear under DRS Faults.

VM and host view in the DRS cluster

When I try to place the ESXi host (esxic-lab-1) into maintenance mode, vSphere displays a warning message:

The following hosts are in a DRS cluster: … One or more virtual machines might need to be migrated to another host in the cluster, or powered off, before the requested operation can proceed.

The ESXi host is not entering maintenance mode even though it is in fully automated DRS mode. It displays another error message:

Unable to automatically migrate the virtual machine Node-1 from the ESXi host esxic-lab-1.

When this happens, you don't get any warning or dialog pop-up. You need to go to the Tasks & Events of the ESXi host manually to understand the reason the host did not enter into maintenance mode. 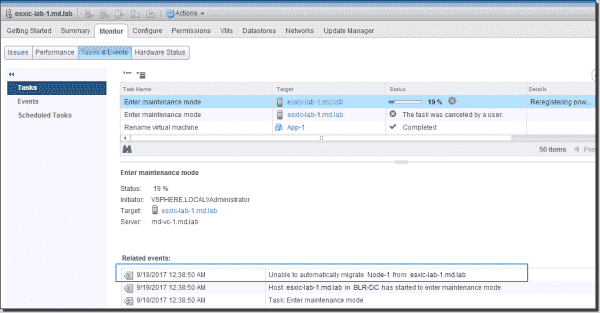 In this case, we have to disable the anti-affinity rule temporarily or manually migrate the VM to a different ESXi host, thus allowing the host (esxic-lab-1) to enter maintenance mode. As a permanent solution, we can add an additional host to the cluster. 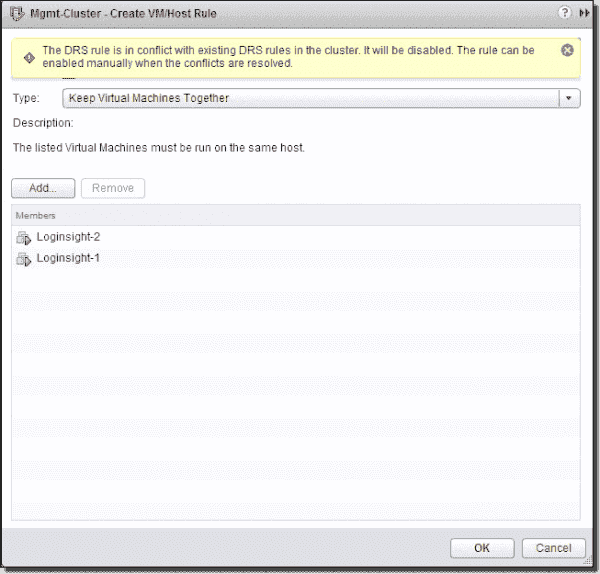 The DRS rule is in conflict with the existing DRS rules in the cluster. It will be disabled. The rule can be enabled manually when the conflicts are resolved.

View conflicting rules under VM:Host Rules in the DRS Cluster