Steve Buchanan  Thu, Jan 5 2023Thu, Jan 5 2023  azure, cloud computing, devops, kubernetes  0
Draft is an open-source project that helps developers go from a noncontainerized application to running on Kubernetes with ease. As a developer with Draft, you don't have to go through an extensive ramp of containers, container registries, Kubernetes, and deployment methods to get your app running as a container on Azure Kubernetes Services.
Contents 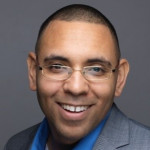 Steve Buchanan
Steve Buchanan is a group manager of cloud transformation/DevOps with Avanade/Accenture, a seven-time Microsoft MVP, and author of several technical books focused on cloud and data center management. He has been in IT for 18+ years in positions ranging from infrastructure architect to IT manager and has presented at several technical conferences, including MMS, Microsoft Ignite, BITCon, Experts Live Europe, and OSCON. Reach him on Twitter @buchatech.

Microsoft acquired container platform Deis from Engine Yard in 2017. You can read about that here. Deis is behind some of the most popular tools for building and managing applications on Kubernetes. Their projects include Helm, Brigade, and Containerd Wasm Shims. They also built Draft.

If you go with Helm or Kustomize, Draft generates what is needed to support these artifact types. If you chose Helm, Draft creates a charts folder in your app directory with the chart YAML files and a values.yaml file containing your app's specifics. If you choose Kustomize, Draft creates the overlays directory and a production directory inside with the necessary deployment and kustomization.yaml files. Draft simplifies creating the artifacts needed to run your app on Kubernetes so that you can stay more focused on building and maintaining the app itself.

Deis still exists but has been renamed to Deis Labs with a bolstered team of new colleagues and resources within the Cloud Native Compute Team of Microsoft. Deis Labs continues to work on open-source projects to this day. One of these projects is Draft.

Currently, there is the open-source version of Draft found here and the newer Draft 2, aka Draft for Azure Kubernetes Service (AKS) (preview), found here. The team at Microsoft decided to breathe new life into Draft, releasing an updated version and integrating the Draft experience into AKS. Draft 2 is wrapped up in the Azure CLI as an extension and works directly with the cloud now. One difference between the versions can be seen in the commands you run with Draft:

whereas Draft for AKS commands start with this command:

Future versions of Draft will add it as a GUI-based extension in Visual Studio Code, and later bring Draft into the Azure portal.

In this blog post, I will walk you through containerizing a JavaScript-based app and running it on AKS using Draft for AKS. Note that the Azure Kubernetes Service (AKS) DevX Extension for Visual Studio Code (Preview) has been released. It is an early version that includes Draft, so it is still a work in progress. I will cover it in a future blog post. In this blog post, we will:

Now, let us dive into the steps to go from a noncontainerized app to an app running on AKS.

Run az aks draft to create the Dockerfile in your app folder. Draft will automatically detect the language of the app. As shown in the screenshot, it knew that my app was JavaScript-based.

Enter the port your app will use. Draft will then create a Dockerfile for the app.

NOTE: Test the Dockerfile locally to ensure it runs. If it does not run locally, it will error out during the GitHub Action workflow > Build and push to ACR.

To test locally, use Docker Desktop and run:

After Draft creates the Dockerfile, it will then prompt you to create a K8s deployment. Notice how you can navigate via arrows.

After you choose manifests, it will prompt you for the exposed port.

It will then prompt you for the name of the app.

It then creates a K8s manifest file.

NOTE: The name of the app should be lowercase. If not, it will fail during K8s deployment later.

If you run ls on the directory or navigate to it, you can see the Dockerfile and a folder with the manifest files for K8s deployment and service.

Display of Dockerfile and Kubernetes Manifests folder in the app directory 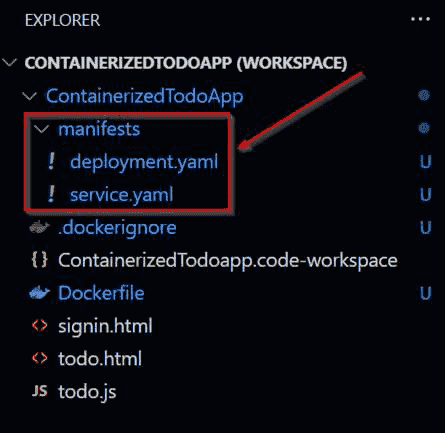 Kubernetes manifests in the app directory

Connect Azure to the GitHub repository

Ensure you have the GitHub CLI installed. Instructions can be found here.

Process for logging into GitHub.com using the GitHub CLI

Next, run this command:

NOTE: Do not include https://github.com/ after Enter github organization and repo (organization/repoName). Enter it in this format instead: Buchatech/ContainerizedTodoApp.

After a couple of minutes, it will complete. 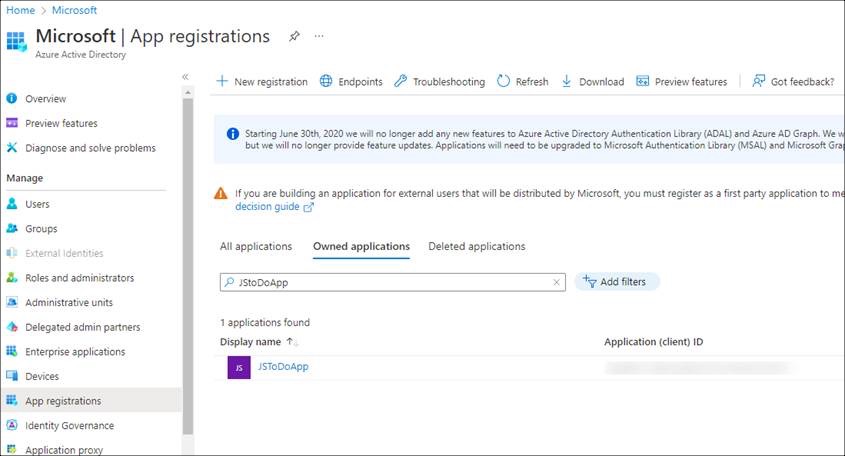 In the app registration, you should see the following credentials indicating that OIDC has been set up to connect to your GitHub repo. 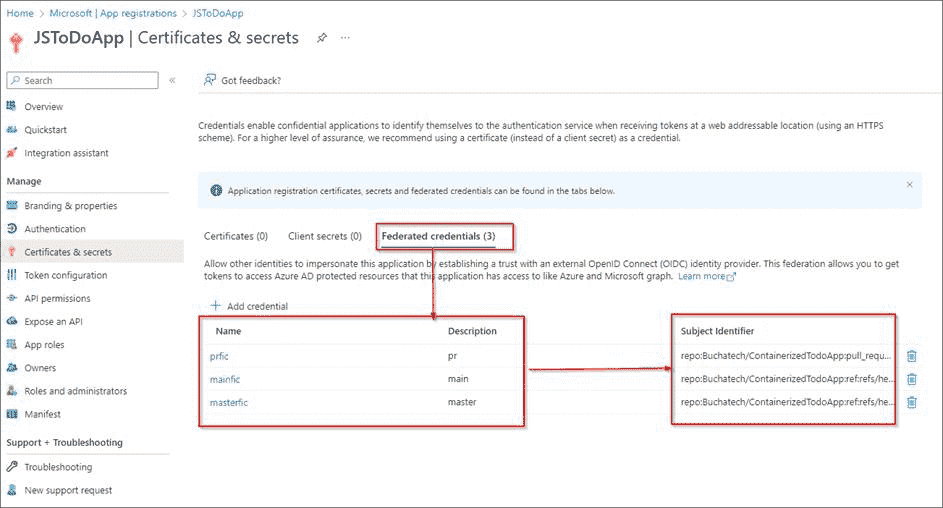 In your GitHub repo, you should see the following secrets created under Actions: 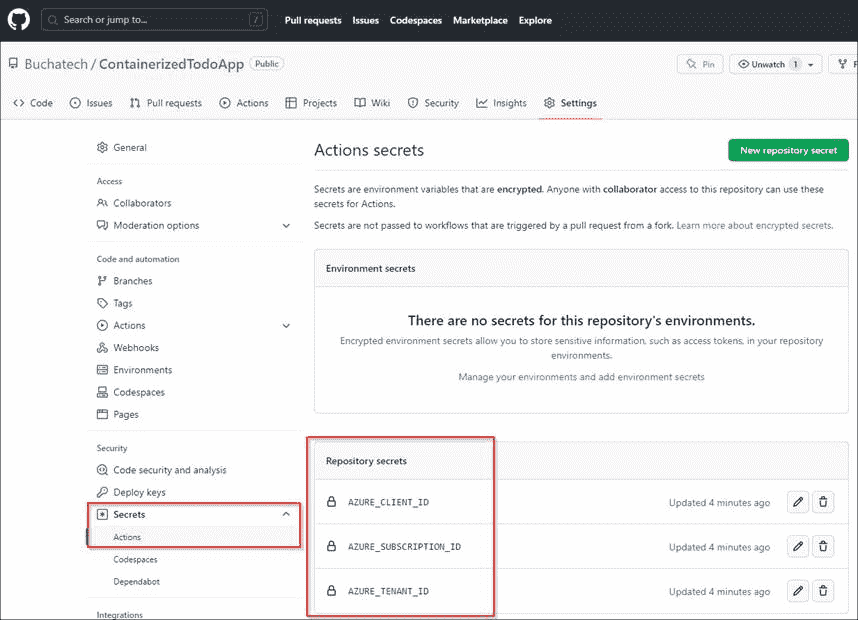 Note that you should have an Azure Container Registry and an AKS cluster created before continuing.

The YAML file is generated for the GitHub Actions workflow in your app folder. 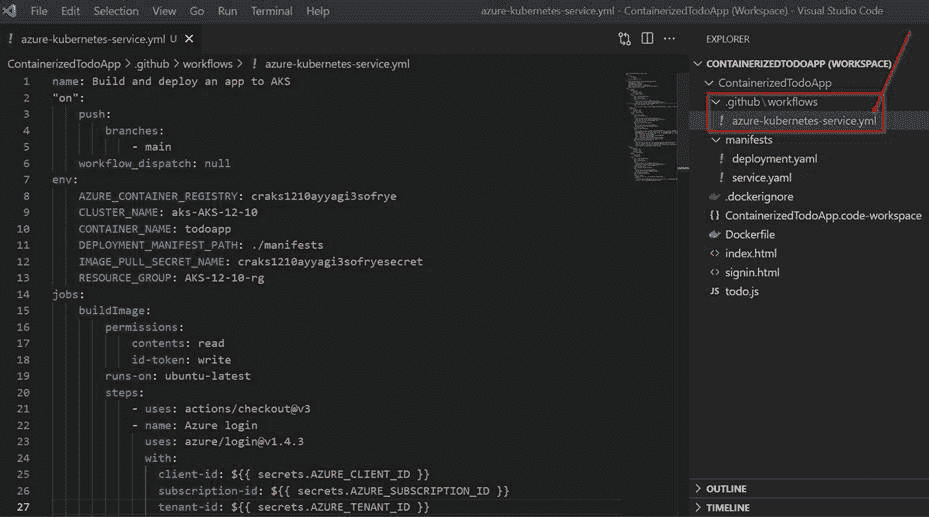 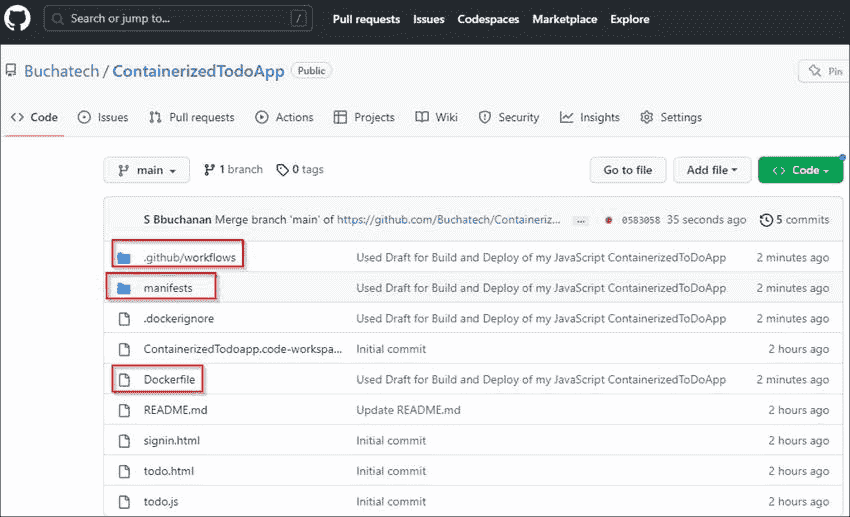 Display of all files committed to the GitHub repo

In GitHub, click Actions to see your workflow starting to run, as shown in the following screenshot.

If you click the workflow run, you can see a summary of the workflow jobs, as shown in the following screenshots: 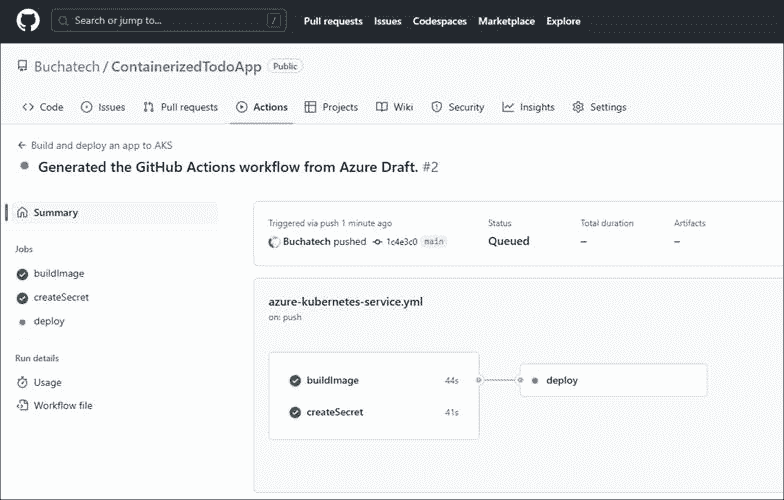 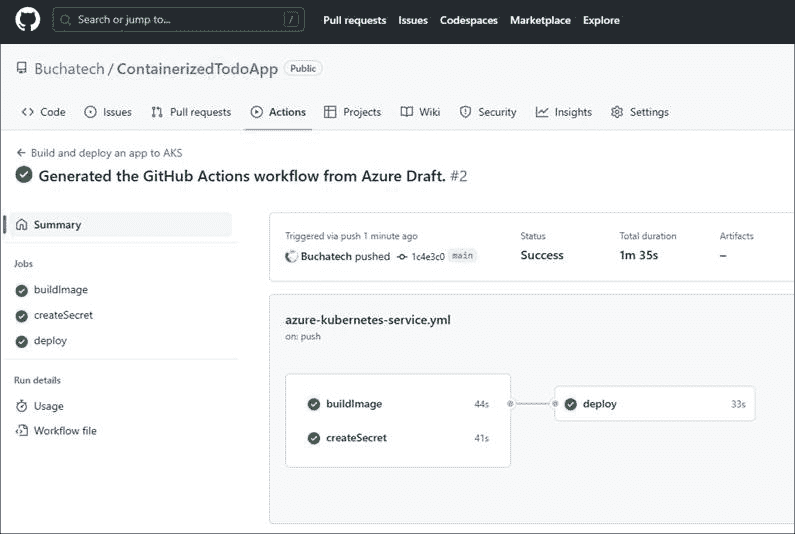 After the workflow completes, you can go into AKS on the Azure Portal and see the secret that the workflow created in your AKS cluster, as shown in the following screenshot: 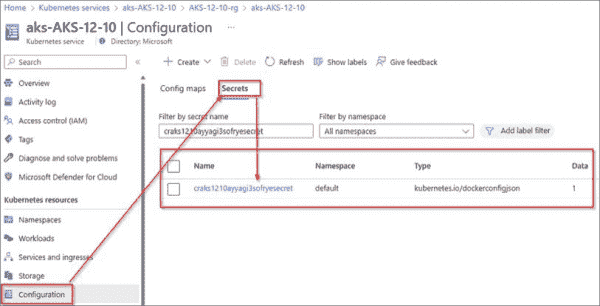 In AKS, click Workloads to see that the containerized app deployment is up and running on AKS. 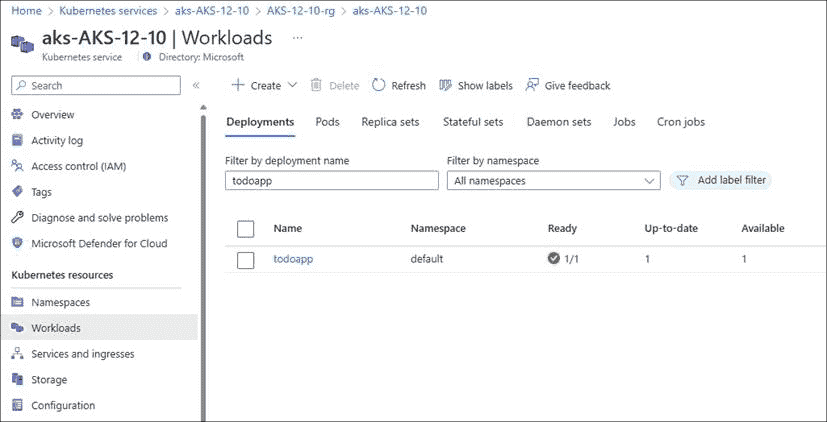 You can click the external IP to access the app in the browser, as shown in the following screenshot: 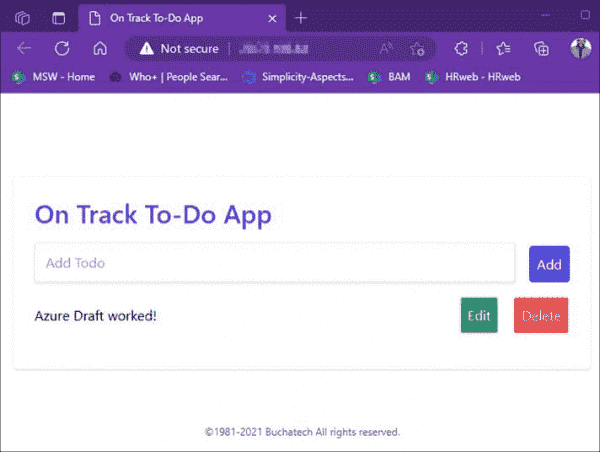 Example of a containerized JavaScript app in the browser

Thanks for reading this blog post. The next step is to go try out Draft for AKS on your own.