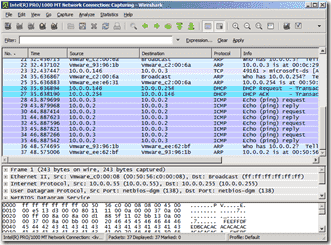 Wireshark 1.0 is available for download. Wireshark, formerly Ethereal, is in third place on the 4sysops list of free admin tools. Obviously, it is a popular tool although the ranking is not really representative because not enough of you found time to rate the tools. Wireshark 1.0 fixes some security holes, so I suggest upgrading it even though it doesn’t really bring new features. Well, okay there are new features. The first one mentioned in the release notes is that the "About" box finally displays version 1.0. I’ll leave it to you to decide if this really counts as a new feature.

Wireshark is certainly a very nice tool, but I somehow prefer Microsoft’s Network Monitor. I can’t tell you exactly why, though. I have them both on my desktop, but whenever I need a packet analyzer I automatically launch Network Monitor. I guess, it is because I need such a tool only every now and then. It is easier for me to memorize how to set filters in Network Monitor than in Wireshark. However, I suppose professional network admins will go for Wireshark.

Network Monitor was not in the list of free admins tool. But you can vote for it now. Let’s see if it can really compete with Wireshark.