Home Blog Do you monitor web activity? 69.9% of SMEs do

A recent survey by GFI Software found that seven in 10 small and medium-sized enterprises (SMEs) use technology to monitor web activity, while another 9.5% are considering making the investment. A great improvement when compared to a similar survey last year which found that only 47% were doing so. But what about the 20.6% of SMEs which still do not control or monitor Internet usage? 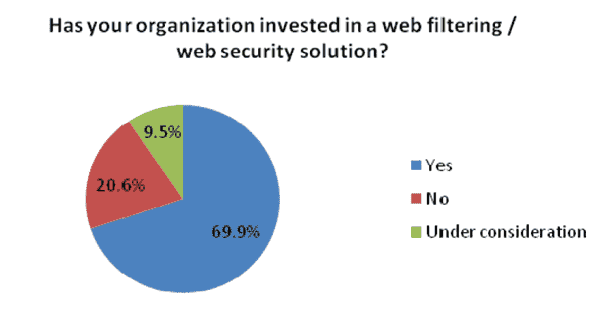 The first question that comes to mind is why? ^

When asked why they hadn’t invested in a web filtering and web monitoring solution, 38.5% of those not using the technology said it was because they had higher priorities. Nearly one-fourth claimed they did not see the need for such a product (24.2%), while 14.3% said they did not have the budget for it. Just over 7% said ‘management has not approved its purchase’.

Although those respondents who said they did not have the budget are somehow justified (subject to them acknowledging the need for web filtering technology), it is worrying that there are other SMEs that do not see the need to monitor internet use within their organization. Could it be that they are not aware of the security threats posed by uncontrolled and unfiltered internet access? A plausible answer, however, in reply to a question on their level of awareness of the risk, most admitted they knew about data leakage, loss in productivity, malware infections, phishing attacks, viewing of inappropriate material, downloading of inappropriate material, and downloading of unapproved software.

Furthermore, when asked if they ever experienced malware or virus attacks via files downloaded by employees or through other online activities, 64.4% said they did – this strongly suggests that they had first-hand experience of the repercussions of unmonitored internet access.

Evidently, the issue is not only because businesses are operating on a tight budget or lack of awareness. Although the study has shown a considerable increase in SMEs that are now monitoring and filtering web activity, one in five do not appear to be duly concerned. They know of the risks but appear to be willing to take the risk. Wisdom or folly? How about you? Does your organization monitor web activity?

This guest post was provided by Christina Goggi on behalf of GFI Software Ltd.