Jörgen Nilsson  Thu, Aug 18 2016Fri, Aug 19 2016  browser, windows 10  18
In Windows 10 1607 Anniversary edition, Edge has a new a Welcome to Microsoft Edge dialog page that will open in the default tab the first time the user launches Edge. In this post, I explain how to remove the Edge welcome page and show you can disable the default browser prompt.

Jörgen is a principal consultant at Onevinn in Sweden. His work focuses on enterprise client management and system management. He is a Microsoft Certified Trainer and a Microsoft Most Valuable Professional (MVP) in Enterprise Mobility. He also speaks at events such as Microsoft TechDays, Microsoft Management Summits, and TechEd.

Many enterprises would like to control and remove such notifications because they can confuse users and trigger unnecessary help desk calls. At the time of this writing, no Edge setting or Group Policy exists that allows admins to remove the Edge welcome page. Thus, I decided to dig in to how we can stop the page from showing. 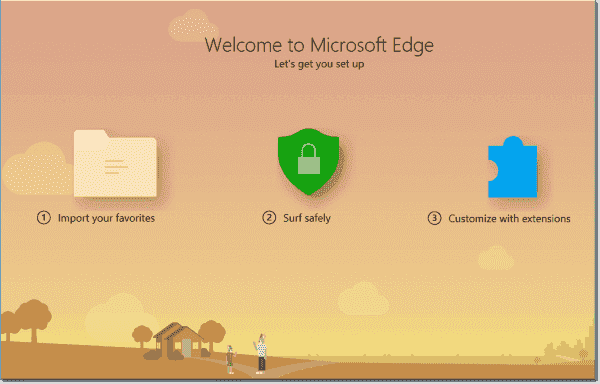 It turns out that it is controlled by the following two registry keys:

I also noticed that if you have Internet Explorer set as the default browser, Microsoft Edge will prompt you to change it.

There is no way to stop this behavior using Group Policy either, so I have included the registry key to disable the default browser prompt as well:

I don't recommend using Group Policy Preferences to deploy these registry settings. The problem is that the entire Appcontainer registry key structure is not present when Group Policy Preferences are applied during the first logon. Only when the user logs on the second time will the settings be applied, and many users will have already started Microsoft Edge by that time.

This why we created a PowerShell solution for the task. You can deploy the script as a logon script with Group Policy or use Configuration Manager (described below).

The script will wait 60 seconds for Windows to create the Appcontainer registry key. If the key did not exist previously, the script will exit. This ensures that the script doesn't run forever, which could happen on Windows 10 LTSB where Edge doesn't exist. Once the key exists, the script will add the registry values for disabling the Edge welcome screen.

Another option is Active Setup because it ensures that the script runs only once per user at logon time. My solution consist of two scripts. The first script (InstallEdgeWelcome.ps1) copies the second script (EdgeWelcome.ps1) to C:\Windows and adds the registry keys required for Active Setup.

One way to deploy the install script is by using Configuration Manager during OS deployment (explained below). Another option is to use a Microsoft Deployment Toolkit (MDT Task Sequence), which I don't cover in this post. 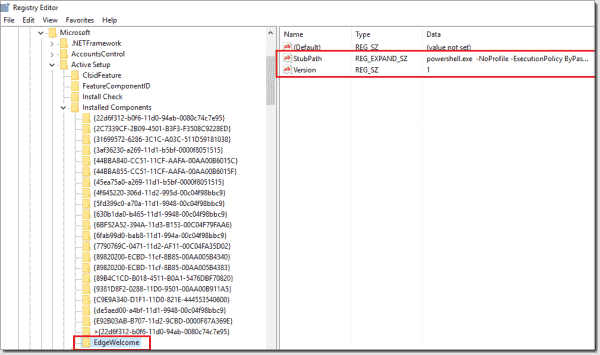 The script EdgeWelcome.ps1 is perhaps a bit unorthodox. It first starts a new PowerShell process that launches the script again. This is necessary because the Appcontainer registry key might not yet exist during the logon process (as mention above), and the logon process would get hung up.

The script then creates the registry values that tell Microsoft Edge that the welcome screen has already been displayed. It also adds a registry key to remove the prompt that informs the user that Edge is not the default browser.

Deploying the script with SCCM during OS deployment ^

To deploy the scripts with Configuration Manager, follow these steps: 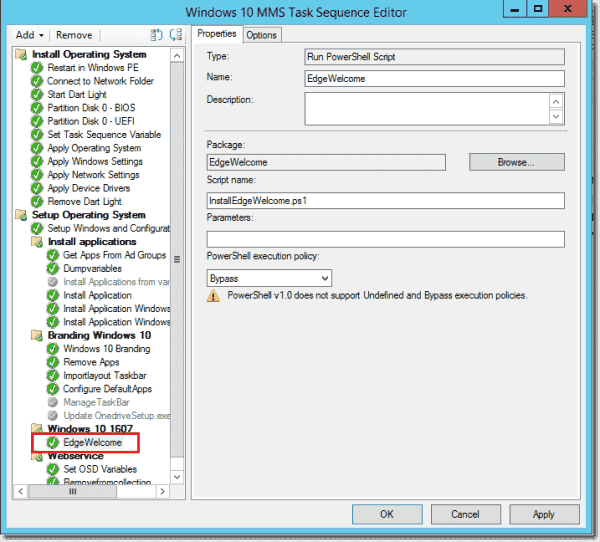 When the user logs on to a newly deployed computer, it will have the registry entries and therefore not launch the Edge welcome screen or the prompt to set Edge as default browser.

The PowerShell scripts discussed in this post are also available at the TechNet Gallery.