When you begin the journey into learning how to deploy a Microsoft Operating System, you quickly realise that although Microsoft provides tools that improve all the time, they leave two main gaps: WIM management and driver management. Before continuing, I want to define the core steps of any OS build:

Base lining your Reference machine ^

The first task of creating a "build", given business specifications, is to install the raw OS that you have configured to meet that specification. You then capture this as the baseline image. You can do this capture in several ways, but the easiest is free: Microsoft Deployment Toolkit (MDT).

MDT is the first tool for your toolkit, as it’s the front-end where you configure and automate both the capture and deployment of a build. The current version is now 2010 Update 1 with both 32-bit and 64-bit versions available and the 2012 version in beta to support SCCM 2012. Ironically, MDT depends on a second tool at the back-end to do most things during the build – the Windows Automated Installation Kit (WAIK, pronounced “wake”).

The WAIK is the second essential tool to get and MDT even includes a download feature to fetch the WAIK for you. Note there are two versions – version 3.0 is for Windows 7 and 2008 R2 and is a 1GB download (KB3AIK_EN.ISO). The older version, 1.0 supports Vista and is an img file. Note, to support Windows 7 SP1 deployments, you also need the WAIK supplement version 3.0 (waik_supplement_en-us.iso).

The first job you use MDT for is creating bootable media to capture the reference machine. This ultimately uses a command-line utility, ImageX, to save the disk content as a WIM. After ten years telling us not to use disk imaging technology, Microsoft capitulated and introduced two tools, first ImageX and later DISM (Deployment Image Servicing and Management) as part of the WAIK. They both provide the ability to mount, merge, capture and edit the reference WIM. They are fine at what they do but are command line only. Although I love the command line, sometimes a GUI helps, like GImageX.

GImageX (latest version v2.0.17) is the friendly face of ImageX . It’s simple, under 200KB and written using Autoit but it does the job superbly. GImageX is easy to use but it shares a few minor idiosyncrasies of ImageX . The first is that normally you need to install the full WAIK (or Windows OPK) to use ImageX itself. As GImageX is merely an ImageX skin, it shares the same fate, but you can make it semi-portable. You just need the files from the WAIK:

The magic step is simply right-click the inf and choose install, and GImageX will work.

In use, you always need to create an empty directory before you start. This is the “mount point” where you mount the WIM as a virtual file-system. When you’re ready to seal the WIM, or just discard it, the other trick is to close all files, command prompts before you un-mount the WIM. If you don’t, the WIM will un-mount, but the files will remain and you can’t mount anything in the mount directory. 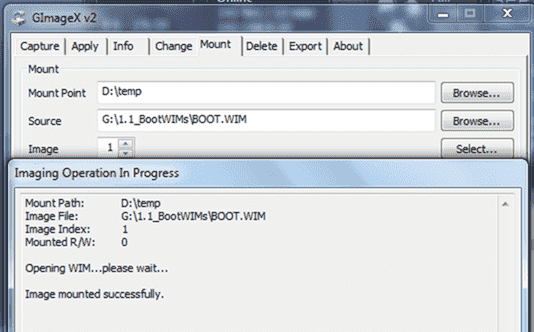 Examining the contents of the WIM file inside the mount point

In my next post I will discuss some driver deployment tools.