I’m going to teach you how to deploy Windows Server 2016 in a Docker virtual container from an Azure-hosted virtual machine (VM). To help you understand our goal, take a look at the following diagram and I’ll walk you through it: 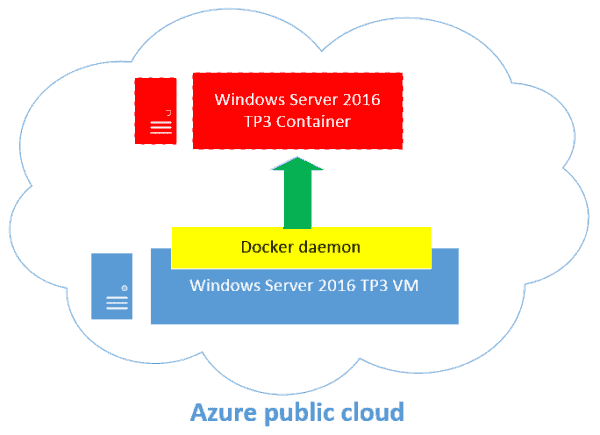 Schematic diagram of our lab environment

The great beauty of running Docker containers is that each application or service running inside a container is completely isolated from any other app/service running on the host. Therefore, instead of maintaining and patching multiple VMs, we patch one host and control our containers either individual or “as a herd.”

Open an elevated PowerShell ISE session on your computer and connect to your Azure subscription. Of course, you’ll first need to install the Azure PowerShell module. In the following example, I connect to my subscription named “150dollar” and Azure storage account named “150west”:

After the process completes, you can always run Get-AzureVM to check the VM run status:

I had difficulty using the VM’s WSMan PowerShell remoting endpoint, so instead I cut my losses by logging in to the “classic” Azure management portal, navigating to Virtual Machines, selecting the containerhost2 VM, and clicking Connect to generate an .RDP file. 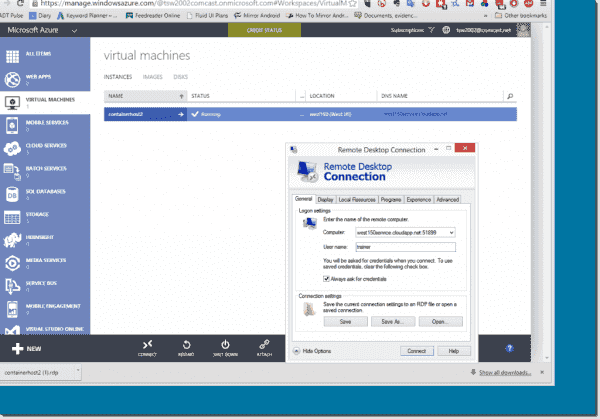 I hate to say it, but sometimes the GUI approach is faster than PowerShell.

What’s interesting is that, after you’re in the RDP session, all you get is a cmd.exe console prompt! I’m not exactly sure how Microsoft hacked this Windows Server 2016 build, but you can run sconfig so the environment feels and acts like Server Core. Technically, Microsoft calls this environment the Windows Server Container Host System.

Anyway, let’s poke around a bit, starting with verifying the Windows Server version:

Okay. Let’s switch to PowerShell and see if we can find Docker anywhere:

Bingo! If you inspect the service list, you won’t find Hyper-V (remember that, under the hood, Azure VMs are themselves Hyper-V virtual machines).

Of course, Windows PowerShell allows us to run external commands, and Docker is no exception. Run the following command to get a full command list:

In Docker nomenclature, an image represents a container template. We can “sorta kinda” consider a Docker image in the same vein as a Windows Imaging Format (.wim) “golden image.”

We’ll start by listing available containers on our host (we can also run Get-ContainerImage):

Okay. So it looks like we have only Server Core available to us. No problem. We’ll use the run Docker verb to create a new container based on a given image. The -it switch puts us into an interactive terminal (console) session within the container after it’s online:

Start PowerShell and create a sample file in the root of drive C:. We’re doing this to prove that we’re working with a Windows Server 2016 container and not the host itself:

Type exit twice to first close PowerShell and then leave the container and return to the host VM.

Now run dir *.txt and what do you see? Nothing, because the container.txt file exists in the Server Core container and not the host! This may be an underwhelming example, but I trust you get the idea.

Let me introduce you to a few more Docker commands before we close today’s lesson. First of all, know that the --help switch gives you command-specific help. For example:

Somewhat confusingly, Docker uses ps to list all containers. You Linux admins know that we use an entirely different ps command to list processes,

I’ve modified the following output a bit to make it easier for you to read:

We stop and start containers using the appropriate verbs along with the container ID or container name:

After a container is started, you can attach to it with, well, the attach verb:

Docker containers have many advantages over traditional hypervisor-based virtual machines, including but not limited to the following:

The Microsoft-Docker partnership bears beautiful cross-platform fruit. You must remember that Docker was created for us in the Linux/UNIX world. The fact that Windows Server 2016 supports the Docker runtime environment natively is nothing short of phenomenal.