Michael Pietroforte  Thu, Oct 1 2015Wed, Aug 10 2016  deployment, desktop management, windows 10  28
The default Start menu layout in Windows 10 is most likely not the configuration that you want to deploy in your network. With the help of Group Policy and PowerShell, you can easily deploy a user-specific Start menu.
Contents

The first thing you have to do is prepare a reference machine that has all the applications installed that you want to pin to the Start layout. To pin a new tile to the Start menu, you first have to find it through Start search. Next, you right-click the tile and select Pin to Start. 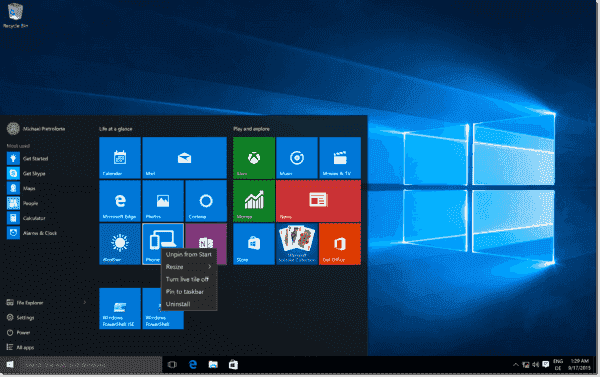 Configuring the Start layout in Windows 10

To remove a tile, right-click it and then click Unpin from Start. Of course, you can also arrange the tiles by just dragging them to their position.

After the Start menu has the configuration that you want to deploy, you have to run the following PowerShell command:

This exports the current Start menu configuration to an XML file. Note that the Export-StartLayout cmdlet in Windows 10 differs from its counterpart in Windows 8/8.1. The new cmdlet no longer offers the -As parameter that allowed you to choose between an XML and a binary format.

In theory, you can modify the XML file in a text editor because its structure is relatively simple. However, I think it is easier to use the Start menu of your reference machine to create the configuration that you want to deploy.

Next, you can deploy the settings via Group Policy by specifying the XML file. The policy can be found at User Configuration  > Administrative Templates > Start Menu and Taskbar > Start Screen Layout. The same policy is also available under Computer Configuration. 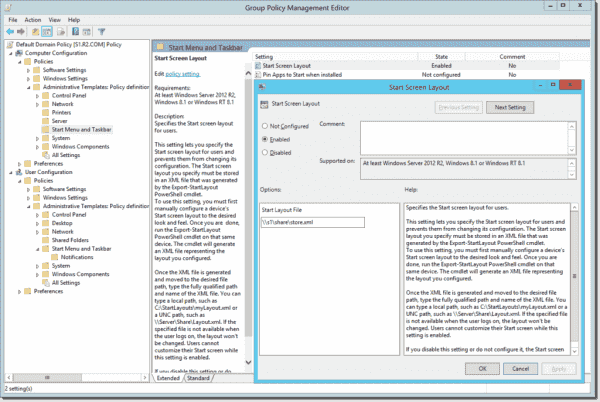 Note that the corresponding policy in Windows 10 is no longer called “Start Screen Layout” but just “Start Layout.” It will be interesting to see how the policy will be named in Windows Server 2016. 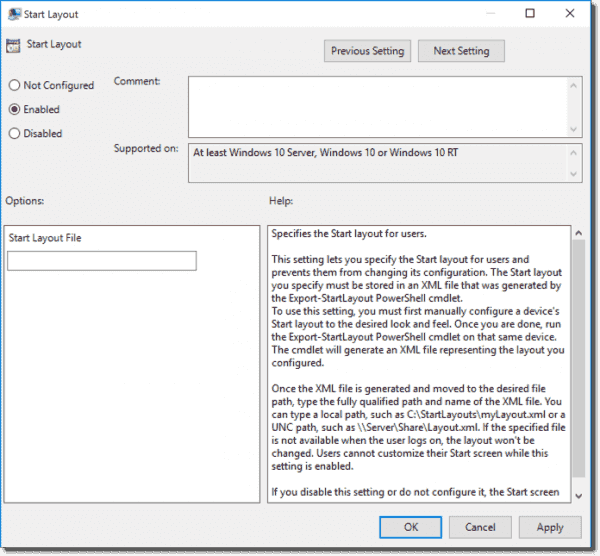 A downside of this method might be that the Start menu will be locked. That is user can no longer pin or unpin tiles. However, perhaps this is just what you want.

Importing the Start layout from a WIM image

Another option is to import the Start layout configuration from a mounted WIM image that you will deploy in your network. For this purpose, you would use the Import-StartLayout cmdlet:

In Windows 8, you would have imported the binary Start screen configuration file. However, because Windows 10 no longer supports this format, you have to work with the XML file.

You can also import the Start layout during an MDT deployment.

Update: It is unclear if this feature works in Windows 10 Pro or not. When I first tried it, it didn’t work. I tried it again after a reader’s comment (see below) and it worked now in 1511 and 1607  (see comments below).