Dealing with smart quotes in PowerShell

Adam Bertram  Thu, Dec 14 2017Thu, Dec 14 2017  powershell, powershell beginner  1
"Smart" quotes are a feature in Microsoft Word that supposedly help editors notice quotes better? I'm not sure, nor do I care. In my world, a quote is a quote, and a PowerShell script has no idea what a "smart" quote is.

Have you ever stopped to wonder whether a particular character on your keyboard needed to be "smart?" I haven't, but someone on the Office productivity team at Microsoft did, and it's been leaving developers and scripters annoyed for a long time now.

You'll sometimes come across a problem when running PowerShell code when you nonchalantly copy and paste code from a Word document directly into a script. When you do this, you're copying "smart" quotes rather than standard quotes because most text editors keep the formatting.

To demonstrate, let's say I have some code saved in a Word document that looks like this: 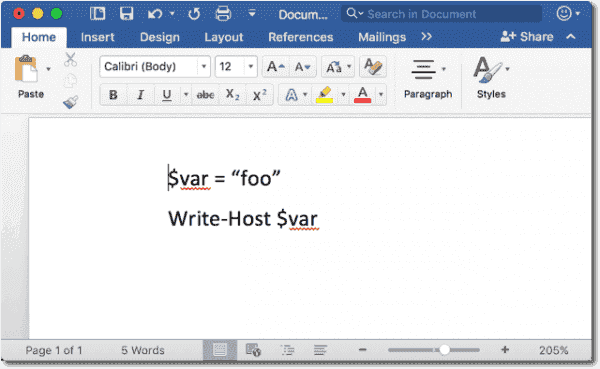 You can barely see the quotes in that Word document don't look "normal." They're a bit angled. That indicates smart quotes. I'll now copy that text into Notepad and save the file as C:\test.ps1 and execute it.

It works! What's the problem, you may ask? It works, but only because PowerShell converts the smart quotes to "normal” quotes. You could just be OK with this, but there are times when these "smart" quotes become a problem. Running on different PowerShell versions, code consumed by other applications, and other factors are all culprits of the problem. The system does not interpret these smart quotes the same 100% of the time.

To make this replacement easier, we can create a couple regular expressions and assign them to variables.

Once we've defined those, we can now search any text file for these characters and replace them with "normal" single and double quotes using Get-Content and the -replace operator.

We can then look at our original text file (a script in this case) and see our script has replaced all instances of double and single smart quotes as we expect!

Always pay attention to smart quotes and formatting when copying and pasting text from Word and other editors. If possible, always treat text as plain text to prevent problems like this from popping up in the first place!