Creating a complete memory dump without a Blue Screen

Sami Laiho  Mon, Apr 27 2020Mon, Apr 27 2020  deployment, troubleshooting  2
When an error is escalated, one of the most common requests is to get a full memory dump of the computer. This can be achieved easily by blue-screening the computer; however, that is not always possible. Sometimes you also don't have a big enough pagefile or a dedicated dump file configured. Let me show you how to do this without booting the computer and without tweaking the pagefile.

You need to install the free debugging tools from Microsoft. The tools come as part of a few different kits, but I usually download the SDK.

You also need the LiveKD.exe tools from Sysinternals. I put the LiveKD.exe in a folder that is my %PATH%-variable, so I can access it anywhere. If you don't do this, you need to use the full path when you call it.

Open a Command Prompt with Run As Administrator and change to the directory of the debugging tools. Run LiveKD.exe, which starts the KD.exe kernel debugger (if you want to use a graphical version, you can run LiveKD.exe -w).

Running LiveKD.exe on a computer with debugging tools installed

Creating a full memory dump from inside the Kernel Debugger

That's it! Now you have a full memory dump.

If you are running the computer you want to get the memory dump from on top of Hyper-V, you can do that easily from the host computer without touching the guest. Let's see how to do that.

This time, you need to install the debugging tools and LiveKD.exe on the host machine. The concepts are very much the same.

Open a Command Prompt with Run As Administrator and change to the directory of the debugging tools. Run the following command (change VM1 to the name of the virtual machine you want to get the dump from): 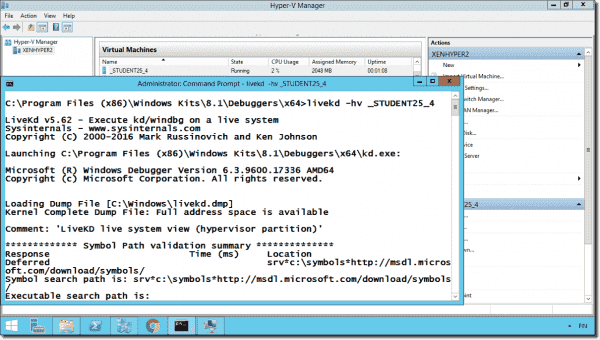 The funny thing about this is that it doesn't require the guest computer to be running in debugging mode. 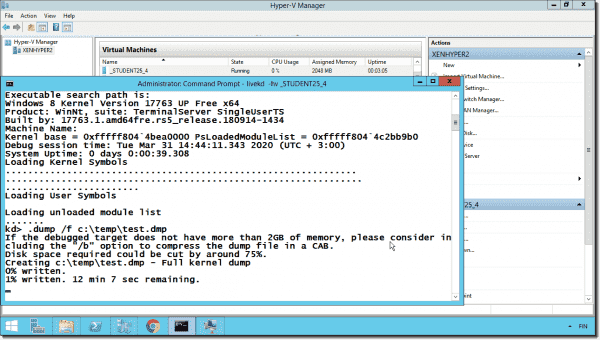 You can do this even faster by just running: 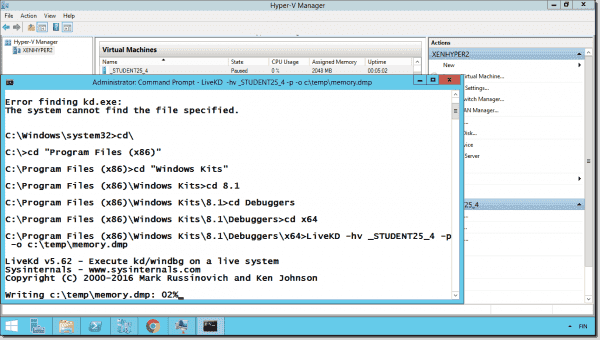 If you are running a guest VM on top of VMware, you should refer to this article, which shows you how to convert a snapshot file to a memory dump with vmss2core.exe. This is often the easiest way.