Vladan Seget  Fri, Jan 22 2021Mon, Feb 8 2021  identity, virtualization, vmware  0
While vCenter Server 7 has many users and roles predefined by default, you might need to create a custom role and add users. As you know, the vCenter Server role is a predefined set of privileges. After adding permission to an object, you can assign a role to the user or group. The default roles in vCenter are not modifiable; this means that you cannot change the privileges that are associated with those default roles. Let's have a look at a couple of roles.

Administrator—Can perform all actions on the object. The role also has all privileges of the Read Only role. With the Administrator role, you can assign privileges to users and groups.

Read Only—Users can view the state of an object, but not modify it. For example, users cannot view the remote console for a host; no action is permitted.

No Access—Cannot view or change object. All new users are assigned this role by default.

Where to add new roles? ^

To create the role by cloning, just select a role, and click the Clone role action icon. 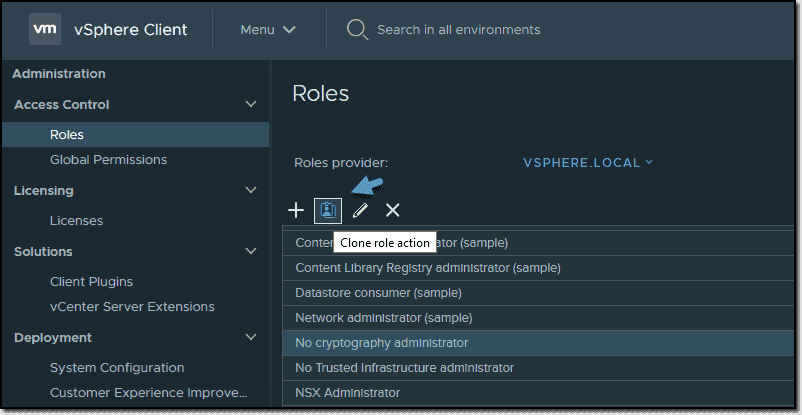 How to clone a role in vCenter Server 7 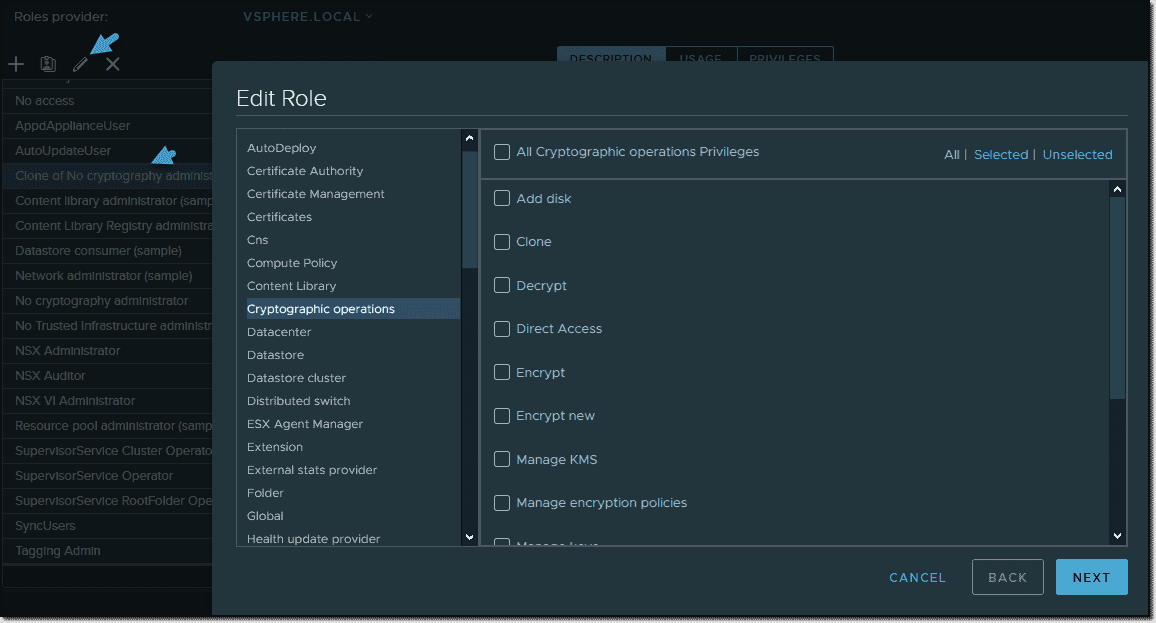 This is the safest way of creating a new role based on an original role. In this way, when you change something, you'll be changing the clone, not the original.

After you create a new role, you can assign privileges. The fact is that a role is a predefined set of privileges that define read properties or rights to perform actions. As an example, the Datastore role allows the creation and modification of datastores.

Sample roles cannot be reset back to default, so in order to avoid losing the original config, simply clone the role again before making any modifications.

Let's quickly recap the different objects we can find within vCenter Server.

When you assign permission to an object, you can choose whether the permission propagates down the object hierarchy. You set propagation for each permission. Propagation is not universally applied; instead, you must check a checkbox for this. Permissions defined for a child object always override the permissions that are propagated from parent objects.

Where possible, assign a role to a group rather than individual users to grant privileges to that group. This is the same logic as in Windows administration. Grant permissions only on the objects where they are needed, and assign privileges only to users or groups that must have them. A good practice is to group objects into folders. Then you can assign permissions to folders containing hosts and other objects.

Go to the VMs and templates view. Pick or create a new folder and add objects inside. Select the Permissions tab, and click the plus sign to add new permission. 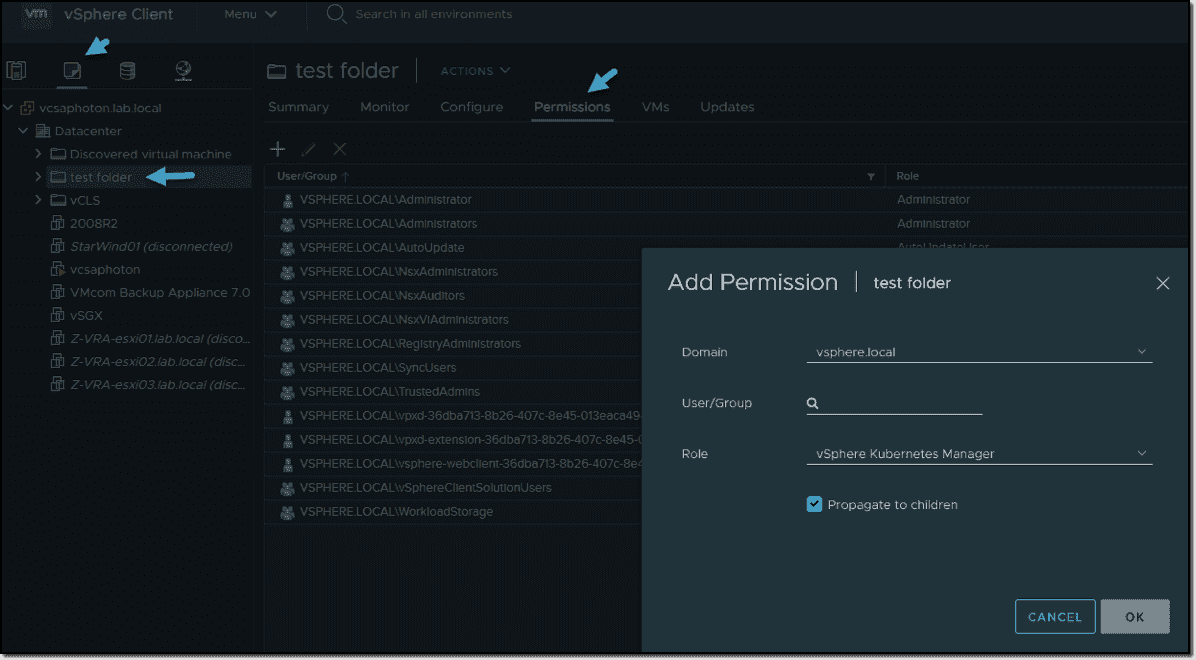 You should always enable propagation (unless it is not wanted) when you assign permissions to an object. This means when new objects are inserted into the inventory hierarchy, they inherit all permissions, as they should, so you don't have to assign them manually.

Note: You can use the No Access role to mask specific areas of the hierarchy if you do not want certain users or groups to have access to the objects in that part of the object hierarchy.

How to create users? ^

Go to Single Sign On, and within this section, select Users and Groups. Then pick the domain in which you want to create your user and click Add. 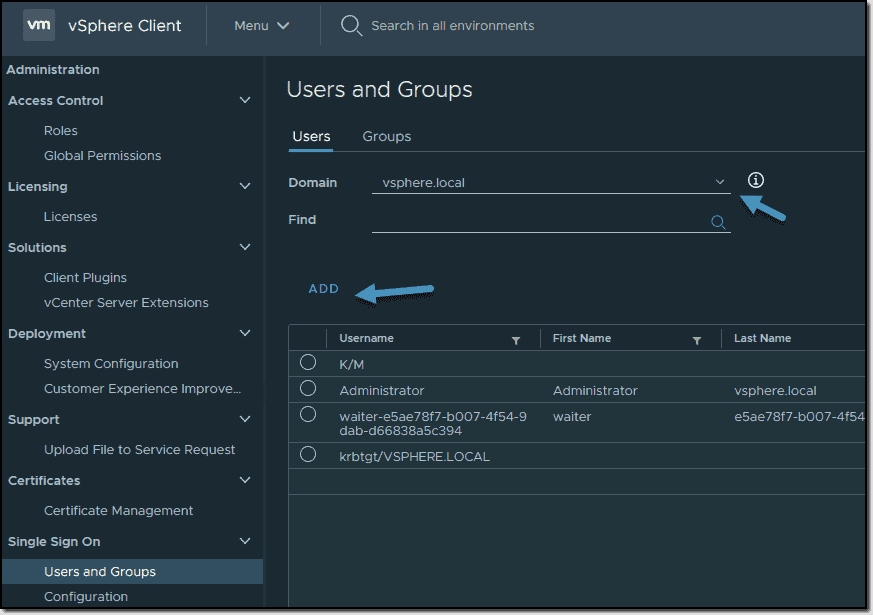 You'll get a new popup window asking you for the details. 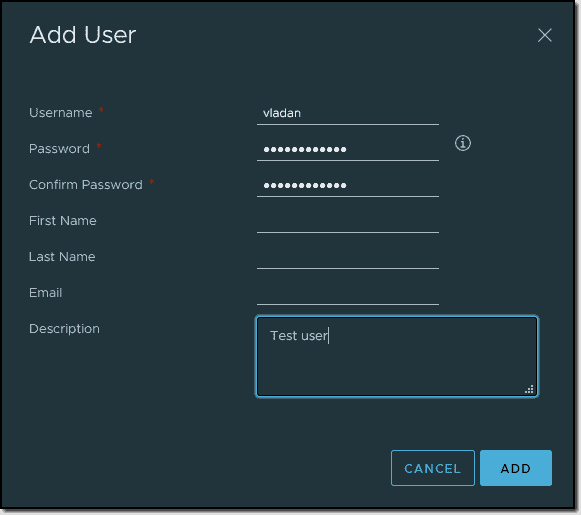 Note: When you set up a Microsoft AD as the identity source, you'll still need to add/remove users of your AD via the Microsoft AD Users and Objects console. Within the vSphere client, the button is grayed out.

For groups, proceed in the same manner.

This topic is part of a free VCP7-DCV study guide that will help you to pass VCP-DCV 2020 certification based on the vSphere 7 product. You'll find all the topics on this page. After successfully passing the exam, you'll be certified VCP-DCV 2020.