But suppose you want to deploy a shortcut that doesn't have the warning, or even better, you want it to use the current credentials automatically without a prompt even showing! To do that, you have to sign the shortcut using a built-in tool and then add that certificate to an allowed list in a Group Policy to tell the system that any RDP shortcut signed by this certificate should work without a prompt.

Certificate prompt: The publisher of this remote connection can’t be identified

This command-line tool has been around since the introduction of Remote Desktop Connection 6.1 Client, which appeared in Windows Vista SP1 and Windows XP SP3. Although the tool appears simple, it enables a powerful utility to create trusted shortcuts.

There are only four command-line options to this command: /sha256 HASH, /q, /v, /l. Those mean, respectively, the hash to sign the shortcut with, quiet mode, verbose mode, and a test mode for verifying if the signing would be successful.

Although the first parameter, /sha256, states SHA-256, you need to pass in an SHA-1 Thumbprint even though the certificate itself can and is recommended to be signed using a SHA-256 hash.

Please note that although the parameter says /SHA256, you actually need to pass in a SHA-1 Thumbprint value even for a Signature Hash Algorithm SHA-256 certificate. A quirk of the tool is that the hash that is passed must not have any spaces. Additionally, if you want to use this hash in the GPO, the hash needs to be in all uppercase. When using rdpsign.exe, quotes around the hash are also advisable.

If you attempt to sign an RDP file with an SHA-1 certificate on the newer version of Windows, you will encounter the following error:

Unable to use the certificate specified for signing. Error Code: 0x8007000d

If you don't deploy the certificate that you are using to all computers that will need it, this will only work on the system that you signed the RDP shortcut on. You can also use self-signed or CA-signed certificates, but they should be imported PFX certificates that have the private key included.

To jump into the actual process of signing a shortcut, follow along below.

One additional note is that you can sign multiple files by passing in additional RDP files to sign.

Note: If any files fail to sign, the tool will continue on to the next one and not fail for all.

If you want to verify that the RDP shortcut has been signed, you can open the shortcut in Notepad and look for the following lines:

If you want to avoid the below prompt entirely, you can add the SHA-1 Thumbprint into the GPO setting. Specify SHA1 Thumbprints of certificates representing trusted .rdp publishers. This is located under Computer ConfigurationTemplatesComponentsDesktop ServicesDesktop Connection Client. 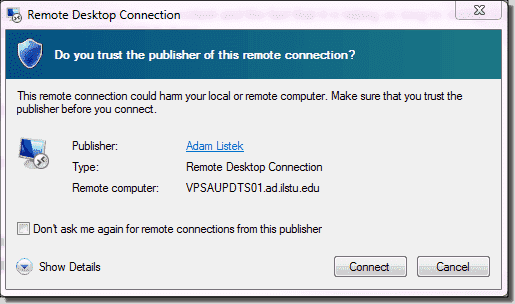 Trust the publisher before you connect

The main thing to remember is that the SHA-1 hash needs to have no spaces and be in all uppercase. If you used the prior PowerShell command to prep earlier, then you should be good to go. 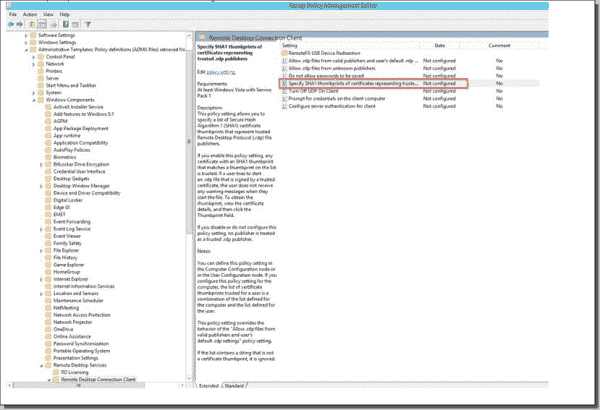 One additional note is that this policy setting overrides the behavior of the "Allow .rdp files from valid publishers and user’s default .rdp settings" policy setting.

The warnings that you see serve a legitimate purpose, and for security awareness, it can be useful to keep those warnings in place. Ultimately, though, if you have a series of trusted connections that you want to make available to your end-users, signing those RDP shortcuts can be a very useful tool.