Mohammed Raffic  Wed, Nov 13 2019Wed, Nov 13 2019  virtualization, vmware  2
The VMware OVF Tool is a free command-line utility that helps users to import and export OVF packages to and from a wide variety of VMware products. We can make use the OVF Tool to copy VMs directly between standalone ESXi hosts without the need for shared storage and the vCenter server.

Since VMware vSphere 5.1, VMware has added a lot of features to simplify VM migrations. We can now migrate virtual machines between ESXi hosts, even if they don't have the shared datastores in between. Cross vCenter vMotion, released with vSphere 6.0, makes the VM migrations even simpler when migrating the workloads across vCenter servers.

In the case of standalone ESXi hosts, you could copy VMs between ESXi hosts by leveraging some of the tools, like VMware Converter, or you could even export the virtual machine to the jump host Windows system and then import the same into the destination host, but all this would take a while and you are dependent on a middle-man system for the VMware Converter installation or during import and export.

Another option is the OVF Tool. Open Virtualization Format (OVF) is an industry standard for describing metadata about virtual machine images in XML format. The VMware OVF Tool is available for many platforms, including Windows, Linux, and MAC OSX. The OVF Tool provides a lot of features, such as importing and exporting OVFs, converting between any VMware-supported format (VMX, OVF, OVA, vCloud Director, etc.), signing OVF packages, and validating OVF package signatures—and many more. In this article, we will look at how to copy VMware VMs directly between ESXi hosts using the OVF Tool.

Install the OVF Tool in Windows ^

As already discussed, the OVF Tool can be installed on various operating system platforms, such as Windows, Linux, and MAC OSX. For this demo, I will explain how to install the OVF Tool on a Windows platform. Installation is as simple as installing an app on a mobile phone; like all .msi package installations in Windows, just follow the installation wizard by clicking on Next. 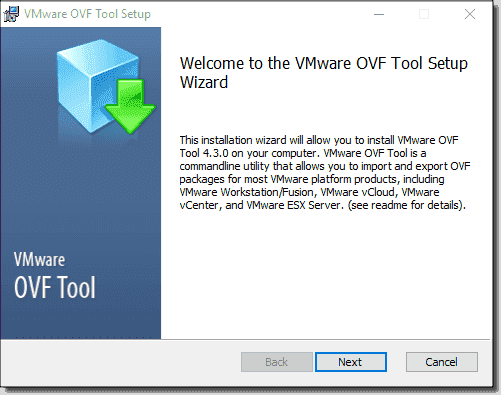 Copy VMs between ESXi hosts with the OVF Tool ^

Query VMs in the ESXi hosts using the OVF Tool