Microsoft calls this license conversion. In some releases of Windows Server, you can also freely convert among OEM, volume-licensed, and retail versions with the same command and the appropriate key.

Cases in which you run an evaluation and then need to convert it to retail are numerous. Yes, this is really useful for environments created for a proof-of-concept (POC) purpose that then decide to go to production. In such cases, it's a great time-saver because you don't have to start from scratch.

The possibility of converting a Microsoft OS isn't new, but previously, back in the day, this was not really possible.

Although in this post we'll focus only on converting licenses or editions, you might be looking also for upgrade options. There's support for some use cases but not others.

There are situations when an upgrade won't work. Let's have a look.

If you think that upgrading between server versions is easy, it might be in some situations. You should not underestimate it. But you need to be aware of some considerations first.

Here are a couple of known facts about upgrading from a previous release of Windows Server (WS 2012 or WS 2016):

If you have installed Windows Server 2019 StandardEvaluation or DatacenterEvaluation, you have essentially only 180 days to test any features of the new server platform version. This might be enough for some but not for others.

During this period, all features of Windows Server 2019 are fully working and available. However, after the trial period is over, the system starts to ask for activation and powers down every hour. This is quite annoying. 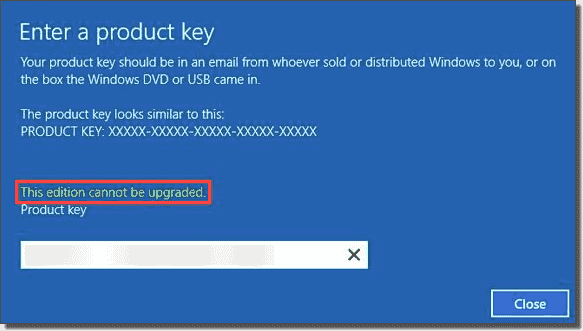 This edition cannot be upgraded

First, check the version that's running with this command:

Get the current edition

Now we can get the list of editions you can convert your current Eval edition to:

And you should get this output:

To upgrade to the edition you want, you can run a PowerShell command to perform the actual edition upgrade. You'll need, however, a valid serial number to do this.

So to upgrade from Eval to Standard, use this command:

From Eval to Datacenter, use this command:

You'll get a prompt to reboot the server during which the server will change its edition.

The server will run through the image-conversion process and then restart twice. After the server reboots, you'll need to reactivate it and enter the key again.

How to convert the Standard edition to Datacenter ^

This is basically the same process as above. The main difference is the system we're on is on Standard already, not Eval.

We'll be using PowerShell, even if apparently other ways exist. From an elevated command prompt, use this command:

Get the current edition Standard

Then simply run this command, which is the same as the one to go from Eval Standard to Datacenter:

You must enter a valid product key to continue with the upgrade process. It'll ask you to reboot.

You can also use this command to change your edition between other types, such as Datacenter or Essentials.

Leave a reply to Rich Click here to cancel the reply