Follow me:
Latest posts by Anil Erduran (see all)
Contents of this article

Many companies today still rely on Group Policy to define and deploy organization-wide settings for different purposes. Thus, if you've already invested in Group Policy for your server farm, you should think twice before putting Nano Server in your datacenter. Any current GPOs (Group Policy Objects) will not affect these servers, even when they are domain joined.

Of course, that doesn't mean Group Policy is dead. It's still the best and easiest way to configure your domain-joined devices and is still a good choice for client installations. However, Nano Server is in another league. Microsoft thinks servers deserve configuration options other than traditional GPOs. DSC aims to replace Group Policy on Nano Server installations. It allows you to create complex functions, apply logic and manage error handling. You can easily apply these configurations to a large number of servers.

If you've already been in the DSC game for a while, you've probably realized that some Group Policy capabilities overlap with DSC's capabilities. Therefore, you need to be careful about choosing either DSC or Group Policy for your environment. If you decide to go with DSC to manage and configure settings for your servers, consider using an excellent community script called ADMXtoDSC. This helps you convert existing registry-based Group Policy settings to DSC configuration scripts.

Before detailing the script, let me give you a short intro about the relationship between Group Policy and registry settings. Group Policies are actually registry settings applied to your targets when you deploy the GPO. Windows stores each registry-based setting defined for Local Group Policy Objects in two different Registry.pol files under the Windows\System32\GroupPolicy folder—one for the computer (machine) and one for the user.

You can find the same user/configuration files under the SYSVOL folder in domain environments.

If you look at the Registry.pol file, you will recognize that it uses a special format to store data. The value between each semicolon (;) represents a specific setting.

You can see all registry keys and values configured for this policy.

If you install the Group Policy Management Console, some useful cmdlets are available. One of them is Get-GPRegistryValue. You can use this cmdlet to retrieve registry-based policy settings for computer and user configurations. The command below simply displays all values from a particular registry key.

Using the Get GPRegistryValue cmdlet to retrieve policy settings

I just wanted to give a quick overview of the tools and cmdlets able to retrieve registry-based settings from an existing Group Policy infrastructure. With some script logic, time and hard work, you can parse each policy with the Get-GPRegistryValue cmdlet and then try to map parsed registry items to a DSC configuration file.

The ADMXtoDSC script saves us tremendous time. It includes a couple of functions and uses the Get-GPRegistryValue cmdlet to retrieve settings to build the corresponding DSC resources. Using the script is pretty straightforward.

ADMXtoDSC looks at the registry for the computer-based keys under HKLM\Software\Policies and HKLM\Software\Microsoft\Windows NT\CurrentVersion. This means that currently, the script cannot convert user-based registry policies to DSC files.

For the keys above, the script parses the policy settings in order to build a proper DSC resource. In the end, it produces a new DSC file The file includes all existing computer-based registry settings from a particular GPO.

The sample DSC script below configures the LLTDIO driver.

The Configuration keyword is the name for your configuration script. ADMXtoDSC uses the Group Policy name here. For the node, it uses localhost by default.

The script then has registry sections that include all existing GPO registry settings. The Ensure keyword means the script will verify the presence of the corresponding key and values.

One of the best things about DSC is that you can easily create a Managed Object Format (MOF) file. This is a widely accepted standard that you can use with bunch of different tools to change WMI settings.

The command below helps you create a MOF file for each node listed in the configuration (in our case, it's just localhost). 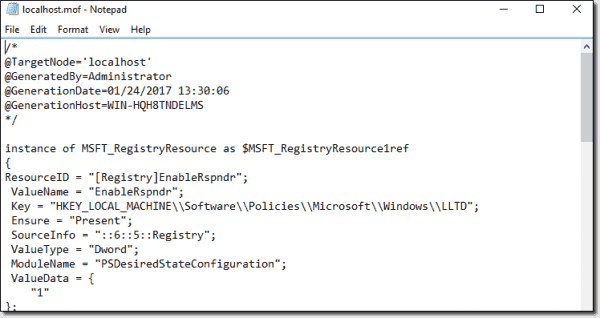 Creating a MOF file from a DSC script

Finally, you can use the Start-DscConfiguration cmdlet and specify the path to the MOF file we created.

This then applies the entire configuration to the nodes.

The DSC configuration script checks whether the registry keys exist and then modifies the corresponding settings. You can easily distribute the MOF file to multiple nodes using push or pull modes. Just like with Group Policy, DSC checks every few minutes to make sure the configuration is up to date.

As mentioned at beginning of the article, Group Policy is not dead, and it's still the best way to configure client computers. However, DSC is a great way to check and configure settings for your servers. With ADMXtoDSC, you can easily convert your existing policies to DSC format.