Even as Microsoft pushes the modern app, most applications still use legacy executables or packaged MSIs for installation. If you manage any number of Windows clients, you should be familiar with packaging and deploying MSIs. Being able to quickly take an EXE, convert it to an MSI, and deploy it with Group Policy (or another application) is one skill that can save you a ton of time. Having the ability to customize MSIs allows you to deploy applications tailored for your environment.

By using EMCO MSI Package Builder, you can easily edit existing packages or convert an EXE into a deployable MSI. The newly updated EMCO MSI Package Builder 6 brings three big features and dozens of smaller improvements. With this update, we have an easy method to control driver installations in MSIs, a simple and powerful UI design, and full Windows 10 MSI compatibility.

EMCO MSI Package Builder comes in two flavors: a Professional edition and an Enterprise edition. The Professional edition includes an easy-to-use visual MSI editor and can do live monitoring of repackaging. The Enterprise edition is designed for complex installations or conversions. It includes more powerful change monitoring tools that include the ability to create services, customize environment variables, and control driver installations.

Managing applications that also install drivers has always been more difficult than it should be. Applications, such as external video cards or interactive white boards, frequently need to install several drivers during installation.

The Enterprise edition of EMCO MSI Package Builder can track and package driver installations in a monitoring scenario. When a monitored package includes drivers, be sure to accept any trust prompts and to not reboot after the installation completes. When the installer is done and EMCO MSI Package Builder has generated the MSI content, you should see your installed drivers under the Drivers category. 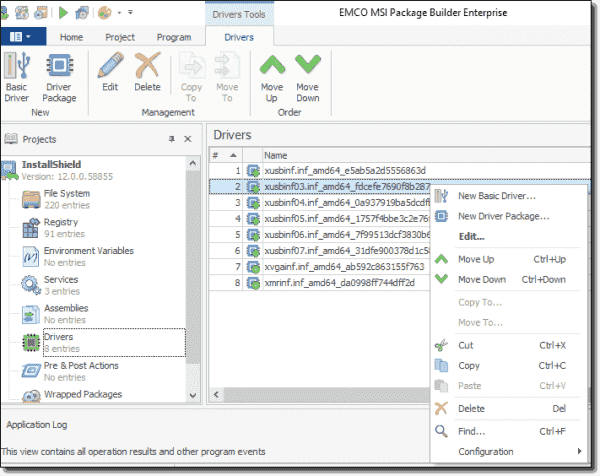 Packages that require drivers can also be installed manually. To do this, create a new package and navigate to the Drivers section. If your driver includes just an INF, select New Basic Driver. Likely, your driver will have a multitude of files that are needed. If so, choose New Driver Package. From here, you can choose your driver files, set your security catalog, and decide on the driver installation mode. I love having the ability to deploy and manage drivers with applications! 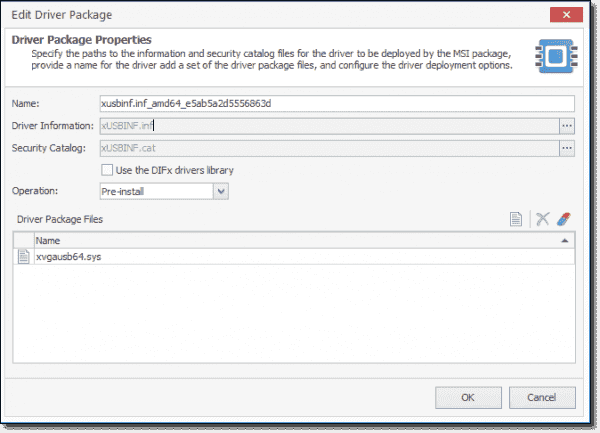 This driver package includes an INF, a CAT, and a SYS file.

As a side tip, you can pull these extracted files out of c:\windows\System32\DriverStore\FileRepository\ on a machine that has your application installed on it.

One of the things I like best about EMCO MSI Package Builder is that MSIs are packaged to industry best practices. The rules for package creation are kept updated for the latest Windows operating systems. Version 6 includes full compatibility support for Windows 10.

If you are new to repackaging applications (or haven’t set up a reference VM in a while), the Repackage Installation Wizard provides guidance on proper machine configuration. 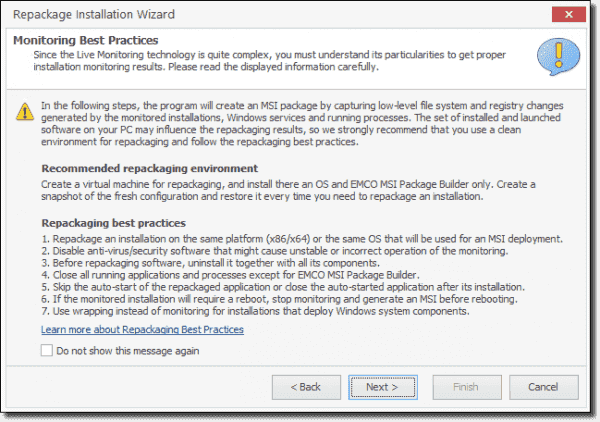 If you have ever worked with the old table-based MSI editing tool, Orca, you will appreciate the logical design that EMCO MSI Package Builder uses. Each core component of the MSI is separated out. If you need to add a file to the MSI, you do it in a single step (not the 3+ steps that tools such as Orca require).

This simplicity holds true across the new UI. Where possible, hierarchical views are shown instead of the flat tables that you may be used to. This makes finding and editing specific settings so much easier. Wizards, such as change monitoring, have been streamlined as well. Simplification doesn’t come at a loss of features, however. Advanced settings are still available in any of the wizards or in package creation.

EMCO MSI Package Builder continues to get better with each release. Version 6 brought several great new features and dozens of small improvements. In this review, we focused specifically on driver deployments, best practices, and the improved UI.