Dan Greenhaus  Tue, Mar 30 2021Tue, Mar 30 2021  powershell  0
With the help of PS2EXE WIN-PS2EXE, you can convert a PowerShell script into an executable (EXE). This allows you to delegeate administrator tasks to your help desk.

Dan Greenhaus
Dan is an IT risk & information security analyst for a global financial company, where he is responsible for infrastructure vulnerability assessments. His primary areas of interest are Active Directory administration and the automation of repetitive tasks using PowerShell.

Now that we have the script, we can save it as test.ps1. Next, we can use PS2EXE and WIN-PS2EXE to turn this PowerShell script into a self-contained EXE file that the business user can use.

PS2EXE was created by Ingo Karstein several years ago to convert a PowerShell script to a "standalone" EXE. However, it hadn't been updated in more than five years, so I chose to use a new version: WIN-PS2EXE, by Markus Scholtes. This module allowed me to take my tiny PowerShell script and convert it to an executable that could be placed on a network share for the help desk user.

With a fairly simple interface, the user can select the location of the saved source file (which is the PowerShell script), create a target file name, and even select an icon for the soon-to-be-created EXE. Once everything is filled out (only the source file is mandatory), click Compile. 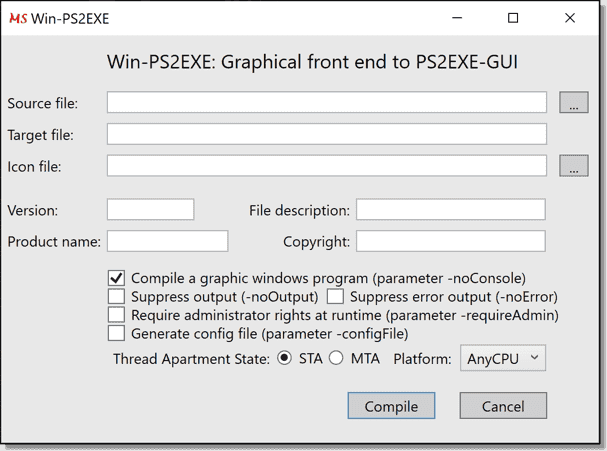 Convert a PowerShell script into an EXE with PS2EXE WIN PS2EXE

The Win-PS2EXE front end passes the parameters to the PS2exe.ps1 back end, and the result is your newly created EXE file in the target location.

Because it is all self-contained, the user doesn't need to start PowerShell, load the ps1 file, and run it. All they need to do is double-click the EXE, paste the AD group, and press Enter, and the results appear.

Some words of caution ^

Converting a PowerShell script into an EXE file is a simple process. Decompiling the EXE back to a PS file is not as easy, but because this is doable, you have to make sure you don't store passwords in your PowerShell script. Keep the source files in a secure location, as it is much easier to make changes when you have the PowerShell code (for bug fixes and adding features) and recreate and redistribute the EXE file.

It is important to note that there are also some security concerns. Some organizations whitelist all the executable files that they permit to be used within their organization. Since you will be introducing a new EXE file, it has to be whitelisted as well.

Converting a PowerShell script into an EXE allows you to deploy your automation solutions to help desk personnel without requiring them to launch a PowerShell console. With the help of PS2EXE and WIN-PS2EXE, compiling your scripts into executables is easy and fast.