Leos Marek  Thu, Jan 16 2020Thu, Jan 16 2020  deployment, powershell, windows server  0
In the Windows Server 2019 Essentials edition, the Administrative Dashboard is no longer available. You have to perform all configuration manually—or via PowerShell.

Leos Marek
Leos has started in the IT industry in 1995. For the past 15+ years he focused on Windows Server, VMware administration and security. Leos is a freelance expert working for banking institutions. He also runs an IT outsourcing company in Jicin, Czech Republic.

Latest posts by Leos Marek (see all)
Contents of this article

Windows Server 2019 Essentials, formerly known as Small Business Server, is a reasonable choice for very small companies. As Microsoft is pushing everything into cloud computing, version 2019 is probably the last version that will have the Essentials edition available.

Clearly the main benefit of Essentials is its price, which is roughly half that of the Standard edition. Also, you do not need to purchase any client access licenses (CALs). This makes the overall price even cheaper.

Over the past few years, as even small companies have used more and more applications, the computing demands have increased. You can have only a single installation of Essentials. Assuming it will be the only server in the environment, I would not recommend Essentials to a customer with more than 10 users or computers.

Administrative Dashboard formerly served to complete the server setup and simplify other management tasks. It was part of the Windows Server Essentials Experience role, which Microsoft removed from Windows Server 2019 along with the dashboard.

Instead of the Administrative Dashboard, only the Server Manager is now available. The configuration is very similar to any other Windows Server edition.

Typically, Windows Server 2019 Essentials will be the first (and most likely the only) server in your environment. This means you will need to deploy and configure at least these roles and features:

First, you should rename the server from the generated WIN-XXXX name to something more suitable. You can do this with the following command:

Before you can start with the Active Directory deployment, you need to configure a static IP address. First, use Get-NetAdapter command to find out the InterfaceIndex number of the network interface controller (NIC) you want to assign the IP to.

Note that at this point, we did not configure a DNS server. The setup will add this later automatically. Now you can install all needed roles using a single command. You can omit the ‑Verbose parameter; I just use it for presentation.

Install the needed roles and features

Now it's time to promote the server to a domain controller using the following command:

Make sure to change the ‑DomainName and ‑DomainNetbiosName parameters to fit your naming convention. Also, note the ‑DomainMode and ‑ForestMode parameters. These serve to set the forest and domain functional levels. However, for some strange reason, the setup does not offer the Win2016 value. Use the Default value to set the Windows Server 2016 forest and domain levels.

After you execute the command, the setup will prompt you to enter the Directory Services Restore Mode password. Next, it will show several warnings (the same ones as in the graphical interface) and will promote the server to a domain controller. 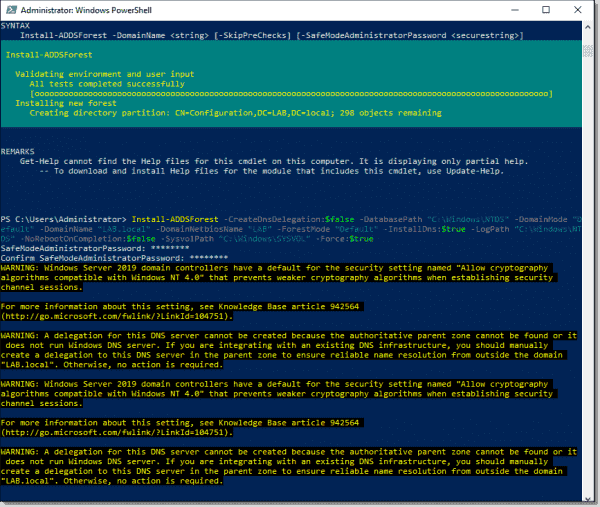 Promote the server to a domain controller

It will reboot the server automatically to complete the promotion. The functional level is indeed set to Windows Server 2016. Also, it set our network adapter DNS server IP address to 127.0.0.1. 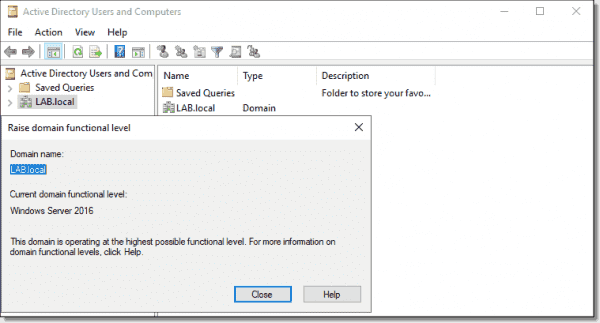 For the initial DHCP configuration, you need to perform several steps. First, you need to create the DHCP management security groups DHCP Administrators and DHCP Users. You can do this using the old netsh command:

You need to restart the DHCP server service after this:

Next, you have to authorize the DHCP server against Active Directory using the following command:

As the last step for DHCP initial configuration, you need to notify Server Manager you've done the configuration; otherwise, you will still see the notification.

That's it for the initial configuration of Windows Server 2019 Essentials.

With the removal of the Administrative Dashboard and the initial configuration wizard from Windows Server 2019 Essentials, the configuration is not as easy as it was in previous versions. After reading this post, you should be able to speed up the configuration using several PowerShell commands.