All of these settings are accessible via the vSphere 7 web client and vCenter Server. The advanced settings are applied at the cluster level (not at the individual host level). These settings control how vSphere HA behaves, and they give you some fine-tuning options so you can make sure vSphere HA suits your needs.

I'll show you, for example, how to change an alternative address for host isolation when no heartbeats are received from other hosts. There are other examples that teach you how to change the default gateway IP address used for isolation tests.

But before we jump into it, let's recap what VMware HA is capable of and which kind of failure protection it offers for vSphere environments.

Server failure—Restarts VMs on remaining hosts when one of the underlying hosts has a hardware problem or is network isolated from the rest of the hosts in the cluster.

Application failure—It monitors VMs via VMware Tools. If failure is detected, it resets VM. It proceeds until the system receives a response from VMware Tools.

Datastore access—HA can also protect against datastore accessibility failures by restarting affected VMs on other hosts that can still access their shared datastores. Datastore heartbeats are used as a secondary channel in addition to the network heartbeat. The system uses the storage network to determine whether the host has been isolated or if it's in a network partition.

Network partition—HA also has a fourth protection function, Network isolation. In this case, we have VMs that are separated by network failure between hosts. If a host becomes isolated like this on the management or vSAN network, the VMs are restarted on other hosts that can still communicate with all the other hosts in the cluster.

The use of multiple isolation response addresses offers VMware HA a potentially more accurate picture of the network connectivity of a host. There may be situations in which a single isolation address would indicate that a host is in a state of complete isolation from the network, but access to additional isolation addresses would show that only a partial network failure has occurred.

das.isolationaddress—The addresses to be used to test for host isolation when no heartbeats are received from other hosts in the cluster. If this option is not specified (which is the default setting), the management network default gateway is used to test for isolation.

You can use das.isolationaddressX, where the X is a number between 0 and 9 for testing multiple addresses. Pretty neat. 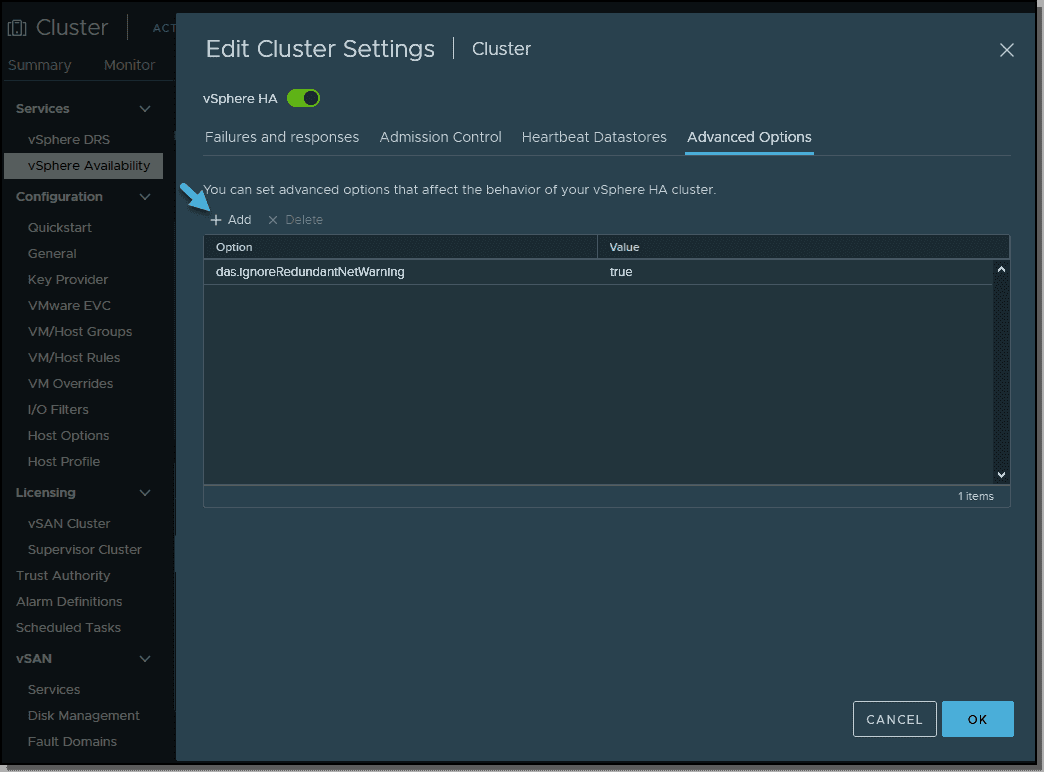 Click Add and type the name of the advanced option in the text box.

Value: Type in a valid IP address other than the default gateway address.

Some of the settings below are used only when you're using a specific HA policy. For example, some advanced settings won't be useful when using a slot-based HA policy or dedicated failover hosts, but apply when used for the cluster resource percentage policy.

das.usedefaultisolationaddress—Specifies whether to use the default gateway IP address for isolation tests.

das.isolationshutdowntimeout—This type of advanced setting is used for scenarios where the host's isolation response is to shut down. You basically set the period when the VM is allowed to shut down before the system powers it off.

das.slotmeminmb—This setting specifies the maximum bound on the memory slot size if you're using a slot policy that calculates slot size based on the maximum CPU/memory reservation and overhead of all powered-on VMs.

das.slotcpuinmhz—These settings define the maximum bound on the CPU slot size. The slot size is the smaller of this value or the maximum memory reservation plus memory overhead of any powered-on virtual machine in the cluster.

das.vmmemoryminmb—Defines the default memory resource value assigned to a virtual machine whose memory reservation is not specified or is zero.

das.vmcpuminmhz—The value is the default CPU resource value assigned to a VM whose CPU reservation is not specified or is zero. Usually used for the host failures cluster tolerates admission control policy. If no value is set, the system uses the default, which is 32 MHz.

das.respectvmvmantiaffinityrules—If you need to reinforce VM–VM anti-affinity rules with a situation when DRS is not enabled, you'll use these settings.

das.config.fdm.isolationPolicyDelaySec—Specifies the number of seconds the system delays before executing the isolation policy after determining that a host is isolated. The minimum is 30. A lower value results in a 30-second delay.

das.heartbeatdsperhost—You can change the number of heartbeat datastores required per host. The default is 2. Enter a value between 2 and 5.

These are all advanced settings that are used when you need to adjust the vSphere deployment to the local specifics. Any of these settings, if used, will be applied at the cluster level to dictate the cluster behavior. If you're running several identical clusters, you'd most likely have different requirements for each, so there is no easy way to copy–paste all settings at once.