Single sign-on (SSO) is a good thing, don`t you agree? After all, SSO enables our users to (a) sign into the Active Directory domain once, and (b) gain transparent access to network and potentially cloud resources without being prompted for reauthentication.

The problem? Any rogue party with an appropriate penetration testing tool (such as Mimikatz) can feasibly connect to a target system over the network and pluck the logged-on user's password hash from unprotected LSASS memory. This is what's known as a "pass the hash" attack. This type of attack can also target Kerberos’ ticket-granting-tickets ("pass-the-ticket") or plaintext passwords ("pass-the-pass").

In Windows Server 2016 and Windows 10, Microsoft appears to be going "all in" with regard to virtualization-based containerization. Sure, we've had file system and registry virtualization since Windows Vista. In addition, Hyper-V forms the basis of Microsoft's private and public cloud strategies. And then there's Docker containers...

Anyway, in Windows 10 and Windows Server 2016, we have a new feature called Credential Guard that's engineered to stop the "pass-the-*" attacks we previously described.

For that matter, Microsoft originally called Credential Guard “Virtual Secure Mode” (VSM). Oh well. One thing for which we can always count on Microsoft is an ever-changing cornucopia of three-letter acronyms (TLAs).

The isolated LSA process (formally termed "Isolated User Mode" [IUM]) hosts no device drivers. It contains only enough Windows OS binaries to allow for secure credential access. The binaries are digitally signed by a certificate that is trusted by the Windows security subsystem. Here's a Visio drawing I whipped up to illustrate how Credential Guard works: 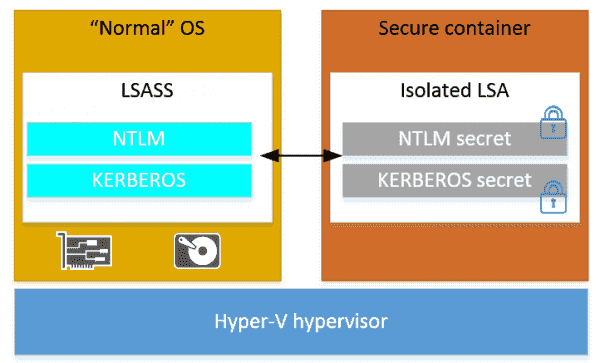 At first blush, the Credential Guard hardware and software requirements seem pretty steep, at least if your shop doesn't have fairly current hardware. Here's the list:

As of this writing, you can't enable Credential Guard on a Windows 10-based VM.

The easiest way to deploy Credential Guard is to do so in local or domain Group Policy. Pop open your Group Policy editor and navigate to the following location:

We're looking for the policy named “Turn on Virtualization Based Security,” as shown in the following screen capture from my Windows Server 2016 Technical Preview (TP) 5 VM: 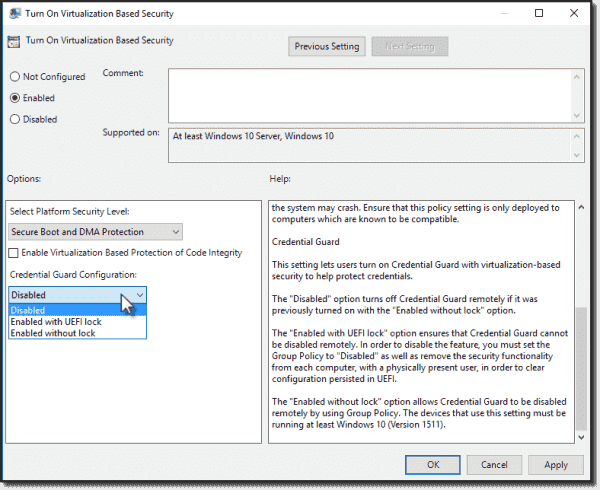 After enabling this policy, you have two choices about how you want Credential Guard to behave:

However, you'll want to perform due diligence before enabling Credential Guard across your enterprise. The reason for this is that Credential Guard prevents the use of older NTLM credentials and unconstrained Kerberos delegation for security reasons. That second point may tweak a few of you in our readership because Kerberos delegation is a standard method to allow our line-of-business (LOB) applications to forward account credentials.

We must always keep in mind that no single security feature or measure alone provides complete protection. Here's a laundry list of scenarios that Credential Guard can't mitigate: