Timothy Warner  Wed, May 17 2017Sat, Apr 6 2019  file tools, performance, storage  7
Not too long ago, systems administrators had no way to optimize their servers' SSDs. In this review, you'll learn how Condusiv solved this problem with their new product, SSDkeeper.
Contents

If you're an experienced Windows systems administrator, you know your servers' mechanical hard disk drives (HDDs) require periodic defragmentation to keep them running efficiently. Condusiv (formerly Diskeeper) has been in the defragmentation game for almost as long as I've been in the industry (quite a while). Read their defragmentation white paper for background information on how HDD defragmentation occurs.

You might already know that Windows cannot write directly to the sectors on an HDD platter. Instead, we have the NTFS abstraction layer, which typically involves 4-KB clusters as each volume's fundamental allocation unit.

Over time, as you create, edit, and delete files, the clusters that make up each file become spread across the volume, resulting in fragmentation and decreased input/output performance.

More recently, the proliferation of high-speed solid-state drives (SSDs) has led many systems administrators to make two assumptions, one of which is erroneous:

The first statement is simply false. SSDs do indeed produce a type of fragmentation even though an SSD has no moving, mechanical parts. This is, once again, because Windows uses the NTFS cluster map on SSDs just as it does with HDDs.

The second statement, however, is indeed true. Once again, read Condusiv's literature for the explanation for this, but let me sum it up in layman's terms. SSDs have a predetermined lifetime in terms of how many write operations the drives can experience before becoming unstable.

The SSD "Achilles' heel" is what Condusiv calls "death by 1000 cuts." In other words, when you write a new file to an SSD, the drive performs far more than a single write operation to make room for the new data. This is called "write amplification," and it's a really bad deal for SSD drives.

Today I will introduce you to Condusiv's new SSDkeeper product. I've been a Diskeeper user for many, many years, and I'm happy that Condusiv developed a safe method for optimizing SSDs. Let's learn more about the tool now.

You can request a free 30-day demo of any of three SSDkeeper stock-keeping units (SKUs):

The deployment package is typical and fits easily into your existing software deployment toolset. Besides the SSDkeeper desktop application, the software installs itself as an autostart service.

The "runs as a service" bit is actually very important because SSDkeeper was written to run in the background and optimize SSD read/write operations on the fly. Condusiv has three core SSDkeeper services at play here:

Let me walk you through the SSDkeeper user interface in the next figure: 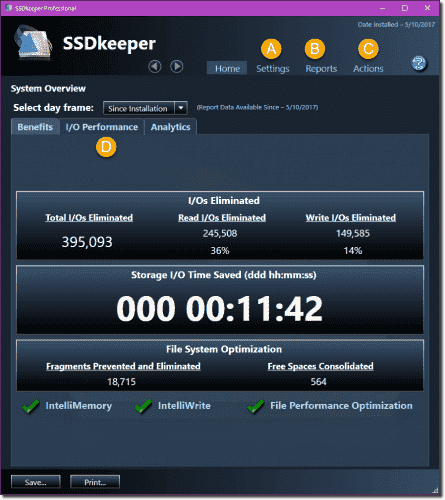 Honestly, besides access to the settings and reports generator, the SSDkeeper user interface is largely about showing off the storage I/O time and operations saved over time. If nothing else, this data gives you satisfaction and justification in having purchased the product.

Because SSDkeeper performs real-time monitoring and optimization, this is largely a "set it and forget it" product. However, you can open SSDkeeper and go to Actions > Perform Manual Operations to run ad-hoc maintenance on your SSDs; I show you the interface here: 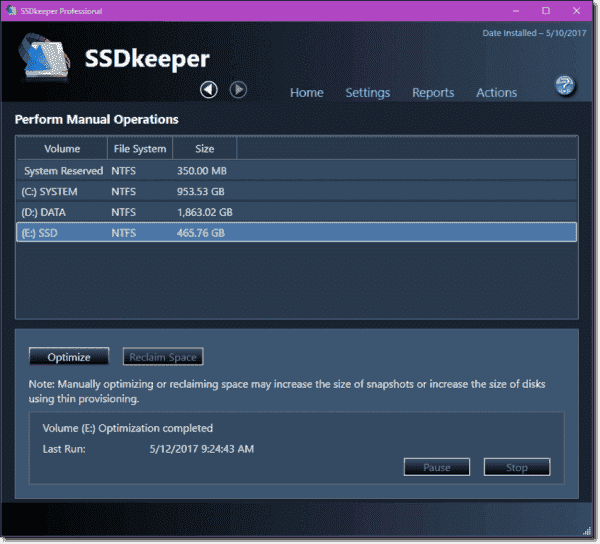 I show you the Diskeeper Administrator console interface in the following screenshot: 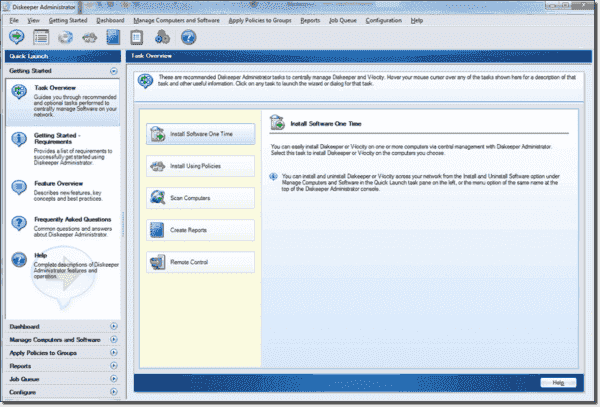 You can undertake several valuable administrative actions with Diskeeper Administrator, including:

Okay, let's wrap up—I know I threw a lot of information at you in this product review. SSDkeeper Professional, Server, and Home editions are available as single-user (technically operating-system) or volume licenses. Condusiv also offers discounted licensing for academic use.

In my experience, an enterprise-class defragmenter is a "no–brainer" for systems administrators whose livelihood depends on optimizing server performance. After all, storage is one of the four key server subsystems (the others being processor, memory, and network).

The fact that Condusiv offers defragmentation and optimization for both HDD and SSD disks is great, and layering a centralized management console on top of their client software is another plus.

My only small complaint is that I wish Diskeeper and SSDkeeper were not separate products. After all, I maintain many SSD/HDD hybrid systems, and it is a bit of a pain to have two client applications to manage instead of only one.