Wolfgang Sommergut  Thu, Sep 3 2015Thu, Sep 3 2015  powershell, powershell cmdlets  1
PowerShell offers multiple options to test whether files are identical or not. If you only need this kind of information, you can use Get-FileHash. If you also want to know in what way the files differ, Compare-Object is the tool of choice.

Comparing files is a common task for system administrators. Hence, Windows always offered command-line tools for this purpose. I am talking about comp.exe and fc.exe, two utilities that you shouldn’t write off in a time where PowerShell dominates the command prompt. In particular, fc.exe offers more options than the cmdlet Compare-Object does, so you will want to use it in special cases (such as when you want to display line numbers).

You will often realize that two files are duplicates, and you might then want to delete one of them. In such a scenario, you don’t have to examine the files for possible differences; you just want to know whether the files are identical or not. With big or binary files, you should calculate a hash value because doing so is faster than comparing the file contents. PowerShell offers the Get-FileHash cmdlet for this task. All you have to do is check whether the results are the same or not.

This example calls Get-FileHash with the two file names and compares the hash properties with the -eq operator. If the files are identical, the result is True; otherwise, it is False. 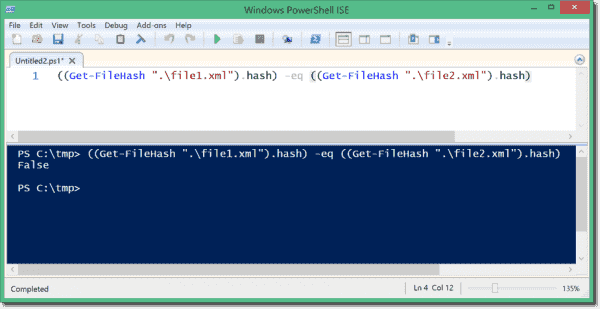 If you also want to see the differences in detail, you have to work with Compare-Object (alias compare). As its name suggests, it not only compares files but also all kinds of objects. Correspondingly, it doesn’t allow you to read files to compare them. Instead, you have to extract their content yourself and pass it to Compare-Object. Get-Content is a suitable cmdlet for the task:

You can modify the comparison with Compare-Object with a couple of parameters. By default, the cmdlet is case insensitive, but with the parameter -CaseSensitive you can change this behavior.

If you add -IncludeEqual, all lines of both files will be listed and the so-called SideIndicator shows whether they are equal or whether one of them only appears in the first or in the second file. If you also use -ExcludeDifferent, you will only get those lines that are identical in both files.

Modifying the contents with regex ^

You can compensate the relatively meager options of Compare-Object by processing the contents of the files before the comparison with the help of replace operators and regular expressions. For instance, you could replicate the ability of fc.exe to compress tabs and spaces like this:

In this example, all whitespace characters (represented by \s) that appear multiple times, one after the other, are replaced with one instance. For complex regex expressions, you could store the results of both calls of Get-Content in a variable and pass it to Compare-Object. This would improve the clarity of the code.