Luc Fullenwarth  Fri, Oct 20 2017Fri, Oct 20 2017  active directory, security  0
Foreign Security Principals or FSPs have existed since Windows Server 2000. However, you could work as a system administrator for years without even noticing their presence because the mechanism behind them is almost fully transparent—almost.

Luc Fullenwarth
Luc is working as a system administrator since 1999 at Alcatel-Lucent, at HP, and currently for an European institution. He focuses on Active Directory, Group Policy, security and PowerShell.

FSPs in a nutshell ^

AD automatically and transparently creates them in a domain the first time after adding a security principal from another forest to a group from that domain.

A FSP points to a security principal from another forest

Why an FSP becomes an orphan ^

It is easy to understand that an orphan FSP will stay an orphan—forever!

And because there is no built-in mechanism in AD to monitor whether security principals matching FSPs still exist, orphan FSPs still remain, until someone removes them.

How to identify and clean up orphan FSPs with the GUI ^

You can find all FSPs in the Active Directory Users and Computers (ADUC) console in a container named ForeignSecurityPrincipals. However, you must first enable Advanced Features in the console. Otherwise the container won't show anything. 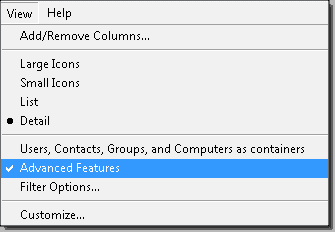 You can recognize orphan FSPs by empty readable names in the ADUC console.

To remove them you just have to select the FSPs without readable names, right-click them, and select Delete.

You can also list all FSPs with the Get-ADObject cmdlet.

To remove orphan FSPs, you can use the Translate method.

That's why I don't recommend automatically deleting all orphan FSPs without any control through the method above. Instead I wrote a little module named OrphanForeignSecurityPrincipals you can download from the Microsoft Gallery.

To automate the removal of orphan FSPs, you can schedule a task.

However, considering the caveat above, and despite the fact it technically works fine, I would not recommend the following command-line cmdlets:

For example, let's say the turnover of your company is 20 employees per month and you run your task every month. The scheduled script could look like this one:

Of course, you can also decide to send the exported file always to the administrator.

You can use one of the following methods to achieve this: