Robert Pearman  Fri, Apr 15 2022Thu, May 12 2022  browser, powershell  7
In this article, you will learn how you can manage extensions in Google's web browser Chrome in your organization. With the help of a PowerShell script, you can install Chrome managed extensions in your network either through Intune or any RMM software that supports scripts.

Chrome extensions add functionality to the browser. You are probably more than familiar with them and how to install them. If you want to install extensions for all users on a device or a group of computers in an Active Directory domain, you can set up a GPO or create a registry key with the relevant settings. Chrome's built-in policy manager (chrome://policy) reads the keys and installs the extensions you have set.

You can read more about policies and settings in the support documentation for Chrome. Today, I want to introduce a PowerShell script you can use to install managed extensions.

Each extension, when deployed, creates a property under this registry key:
HKLM:\Software\Policies\Google\Chrome\ExtensionForceInstalllist

The property type is String and should be an integer. The value is the extensionId, which you can get from the Chrome Extension Store, and a URL where updates can be collected, separated by a semicolon.

For example, if you wanted to deploy uBlock Origin to all your Windows devices, you would use:

The script is fairly basic, as you would expect. It looks for the base registry key for Chrome, creates it if it is missing, enumerates any already deployed extensions, and then adds the new one at the end of the list.

The next time Chrome refreshes its policy, the new extension is loaded. You can run the script from any elevated PowerShell window using the parameter extensionId.

As an example, here is our Chrome Extensions window, which shows no managed extensions.

Chrome extensions before management is enabled

I now run the script to deploy uBlock Origin and 1Password. 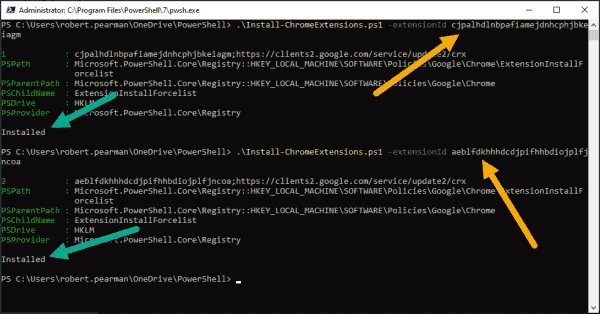 As both of these were already installed in the user context, no new extensions were added; however, the ability to turn the extension off is now gone.

If I now deploy the Microsoft Teams extension, you can see it also appears in the Extension window.

You cannot disable a managed extension; the slider is grayed out

If you want to deploy this through Microsoft Intune, you will need to remove the parameter section and replace it with a static extension ID. Then, when adding the script to Intune, you can name it according to the extension you are installing.

In my next most I will explain how you can block or remove Chrome extensions with PowerShell.