Timothy Warner  Wed, Oct 15 2014Thu, Oct 16 2014  windows 10, windows 8.1  0
Besides the revamped Start menu, changes to the behavior of so-called “Windows Store apps” have caught a lot of people’s attention with the recent introduction of Windows 10 Technical Preview. Let’s review a bit of history concerning Windows Store apps and then unveil their changed functionality in the latest version of Windows
Contents

Windows 8 was the first Windows version to give us these “immersive,” full-screen apps that have gone through so many name changes I simply can’t keep them straight. Remember “Metro” apps? How about “Modern” apps? How about “Windows 8” apps?

My understanding is that Microsoft terms these special apps “Windows Store” apps, which seems to be a bit of a misnomer. For instance, the default Windows 8.1 apps don’t come from the Windows Store. How about apps that you code yourself?

Recall that the new app model given to us in Windows 8 involves full-screen “experiences” that consist of no window chrome, live tile data, and an identical user interface on both desktop Windows and Windows RT–based tablets. Windows Store apps employ the Windows Runtime application programming interface (API) and can be written in a .NET language such as C# or Visual Basic or in web development languages such as HTML5 and JavaScript.

I’ve been a Windows power user since version 3.1. If I had navigation trouble with Windows 8 apps, I can only imagine the trouble that ordinary end users had. To wit:

In my opinion, all of the touch-centric features of Windows Store apps worked okay on a tablet (I had a first-generation Windows Surface running Windows RT), but these were a “fish out of water” on a desktop operating system—even with touch monitors.

Windows 8.1 Update provided some minor improvements to the Windows Store app behavior. In particular, you can get to running Windows Store apps from the taskbar. Also, you do have minimal window chrome to give the user some context of what’s going on. 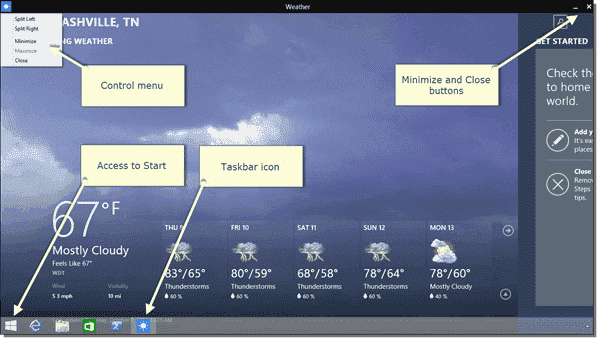 Although the Windows 8.1 Update app improvements are helpful, we’re still left fumbling around trying to obtain the app’s navigation structure. For instance, how do you get to the Weather app settings?

As I discussed in my article on the Windows 10 Technical Preview Start menu, the Start screen is disabled by default, and some default Windows Store apps are automatically tucked into the Start menu interface.

Also, the Windows Store apps run in a completely resizable window, as you can see in this screenshot: 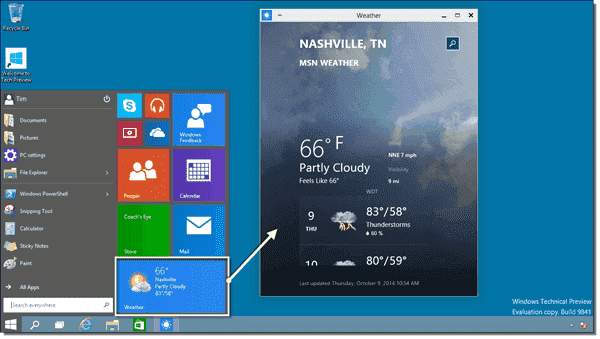 Microsoft obviously paid attention to customer feedback. Take a look at my annotated screenshot and ponder the changes to the interface and default app behaviors: 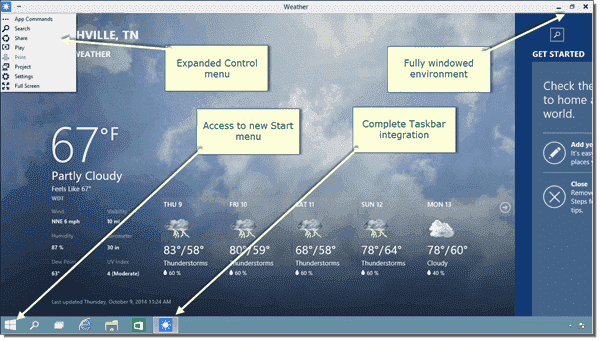 Getting to know the new control menu

I’d like to close this article by introducing you to what I think is the best addition to Windows Store app behavior: the newly expanded app control menu. I doubt you’ll see this interface element in Windows RT, but it works great in Windows 10. Look at the following screenshot, which shows a “mash-up” of most control menu commands. I’ll then briefly explain them for you. 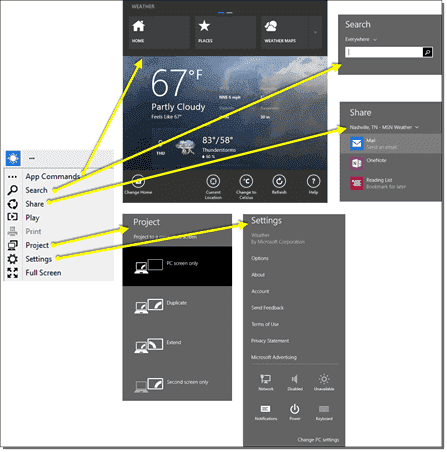 From what I’ve seen, the specific content of a Windows Store app’s control menu depends upon the app in question. However, having a single, unified way to access these commands is a big win, in my humble opinion.

What happened to Charms, you may wonder? Well, in this build of Windows 10, they are (fortunately) absent. The word on the proverbial street is that charms may persist in Windows RT for tablet devices.

Thus far, I’m very happy with the changes Microsoft added to Windows 10 Technical Preview. For the past year, I’ve been running Windows 8.1 on my desktop PC, but I installed Stardock’s Start8, and I completely ignore the Start screen and Windows Store apps.

In Windows 10 Technical Preview, the Start screen is disabled by default. I can remove the live tiles from the Start menu, and I continue to be productive in the way in which I’m most comfortable.

From my limited perspective as a non-Microsoft employee, it seems to me that Microsoft may be back-pedaling a bit on their “grand, unified operating system” experiment that they began with Windows 8, Windows RT, and Windows Phone 8. It’s a neat idea, in principle, to have (largely) the same OS running on your smartphone, Xbox One, tablet, and laptop, but again I found the inclusion of touch-centric controls on a desktop box to be an almost insurmountable obstacle.

What do you think of all this? Please let us know in the comments. Thanks a lot for reading.