Sander Berkouwer  Thu, May 23 2013Thu, May 23 2013  encryption, server core  2
Active Directory Domain Controllers are at the core of every organized Microsoft-oriented networking infrastructure, and Windows-based DNS Servers and DHCP Servers also make perfect sense on Server Core installations. Another technology, however, emerges more often at the center of these types of environments these days: certification authorities.
Contents

The Active Directory Certificate Services (AD CS) technology makes Windows Server-based Certification Authorities possible. With them, you can provision users and computers with digital certificates to secure their communications through a Public Key Infrastructure (PKI) scheme.

History of the Certificate Server Role in Server Core

Active Directory Certificate Services, themselves, evolved to become a multi-role technology next to the all-important Certification Authority (the server component issuing certificates to users, computers, and services and managing certificate validity), including:

You can install the Active Directory Certificate Services role by running the following PowerShell one-liner (start off by typing PowerShell first, to get the PowerShell prompt):

This way, the Active Directory Certificate Services Role will automatically be installed with the Certification Authority Role Service. Optionally, you can install one of the other five Server Role Services.

In my opinion, two scenarios stand out for Server Core CAs:

The default secure stand-alone Root CA on Server Core would take up the least number of resources and would be less susceptible to attacks, compared to Full installations of Windows Server. After the initial installation of the Active Directory Certificate Services Role, use the Install-AdcsCertificationAuthority cmdlet in PowerShell to configure the CA.

By default, when you run the Install-AdcsCertificationAuthority cmdlet, it will configure an Enterprise Root CA with a Common Name based on the Domain and Hostname of your Server Core installation and appended with -CA. It will issue certificates with a key length of 2048 bits, based on SHA1 from the RSA#Microsoft Software Key Storage Provider. Its certificates, by default, would be valid for 5 years, and your default CA would store its database and logs in C:\Windows\System32\CertLog.

This might not be completely suitable for your stand-alone Root CA, so we’re changing at least some of the settings in the following command:

With a validity of 10 years, your Issuing CAs will have a long enough certificate life time period to issue certificates with more common certificate validity periods. By placing the database and logs on a different drive, an additional layer of security and high availability is added to the system.

The Issuing CAs, then, can be configured using the following PowerShell command:

To configure a CA for a smaller environment, you might simply use the following PowerShell command:

Since most of the settings for a default CA look to be well-suited for small- to medium-sized businesses, I consider it a best practice to use them in this case. Answer y to accept them.

With your CAs configured and handing out certificates, you might feel the need to configure Certificate Templates. Sure, you can manage your Server Core CA from a Full installation of Windows Server 2012 and Windows 8 with the Remote Server Administration Tools (RSAT) installed. But you can also add Certificate Templates on the console of your Server Core installation, like a boss. To this purpose, the Add-CATemplate cmdlet was added to Windows Server 2012. 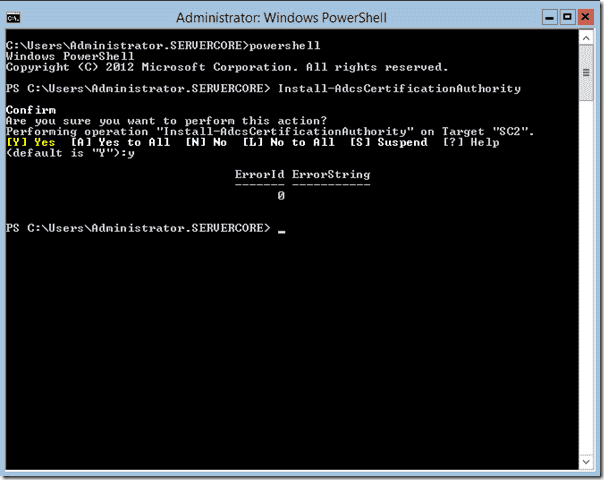 Certification Authorities on Server Core installations of Windows Server 2012 Standard Edition offer all the benefits of a highly available certificate infrastructure, and with all the benefits of a centrally manageable networking environment based on highly secure operating system installations. If that’s not secure enough, you can always throw in a couple of Hardware Security Modules (HSMs).