Capture an image in MDT: CustomSettings.ini and Bootstrap.ini

Home Blog Capture an image in MDT: CustomSettings.ini and Bootstrap.ini

Joseph Moody  Thu, May 21 2015Thu, May 21 2015  deployment, desktop management  6
In the previous post, we configured the MDT deployment share, imported installation media, and configured the task sequence with applications and additional steps. To capture the reference image, we still need to configure the CustomSettings.ini and Bootstrap.ini files. 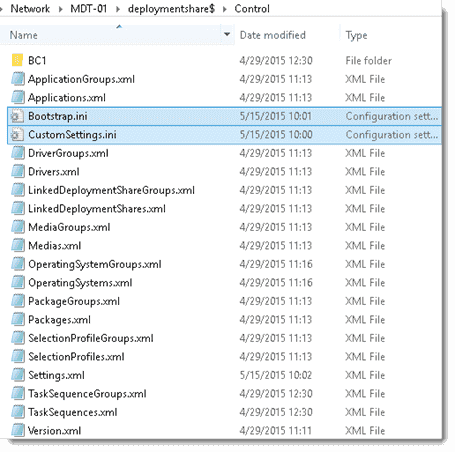 Be sure to edit the ORGNAME, admin password, time zone, and WSUS/SLShare path. Ideally, your MDT capture environment is separate from the production environment. This provides a simple method to keep separate rules. If you are using an existing CustomSettings.ini in an existing MDT environment, you will at least have to set DoCapture=Yes and SkipCapture=No.

The two settings above and two additional settings are important to the capture process. The DoCapture setting instructs the task sequence to sysprep the image during capture. SkipCapture controls the Capture settings pane in the initial MDT wizard. The JoinWorkgroup setting ensures that domain policies are not set on your reference image. Configuring the WSUSServer setting provides for a faster capture time.

You will also have to configure the Bootstrap.ini file so that clients can connect to your network share. As a best practice, use a dedicated account that only has the read/execute permissions to the MDT deployment share and write access to needed folders such as the Capture folder. If needed, here is a sample bootstrap file. Be sure to set the DeployRoot and domain credentials.

Save your Bootstrap.ini file and ensure that CustomSettings.ini (located in the Control folder) shows your updated rules. In the Deployment Workbench, right-click your deployment share and select Update Deployment Share. This will generate your boot media. To simplify the creation process, we will boot a VM off of the Lite Touch ISO that is being generated. 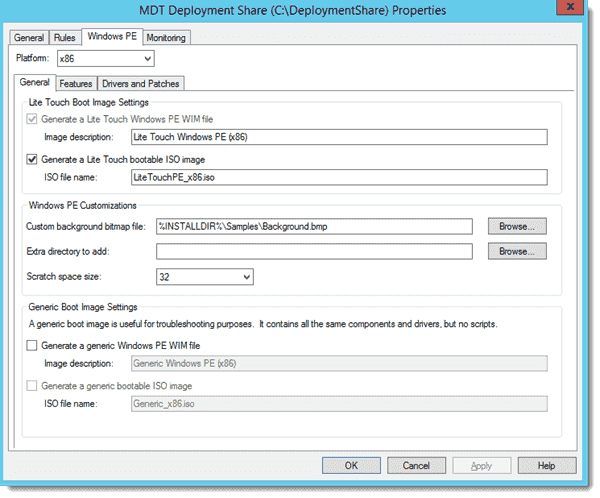 The capture process relies on the bootable ISO for ease of use. This setting is on the Windows PE tab

Building your reference image for Windows 8.1 ^

A simple build and capture environment uses two Hyper-V VMs. The first is the MDT server that we previously configured. The second is a client VM that will process the Task Sequence and will provide the reference image. By using a Hyper-V client, you do not have to worry about drivers in your reference image. This version of Windows PE includes the necessary drivers needed to capture a Hyper-V client.

If you haven’t already done so, create a second VM to serve as the client. Assign two virtual processors and at least 4GB of RAM to the machine. These two items alone may shave 20-25 minutes off the build and capture time. If you want to save additional time, consider booting the VM from a RAMDisk and changing the capture process from ImageX to DISM.

The deployment share should have finished updating by now. In the boot folder of the deployment share, there should be a LiteTouchPE_86.ISO. and a LiteTouchPE_X64 ISO. If you are using a GEN2 Hyper-V client, you will need to use the X64 boot media. The network path to this location would look like this: \\MDT-01\DeploymentShare$\Boot. Attach the ISO to a blank VM and take a snapshot. The snapshot provides a quick way for you to restart the capture process in the future.

Start the VM and allow it to boot into Windows PE. Select the capture task sequence that you created in the previous post. Specify the capture path; by default, this is the Capture folder in your deployment share. The account you are using to connect to the MDT deployment share should have write permissions to the folder that will contain the captured reference image. This account is specified in the Bootstrap.ini file. 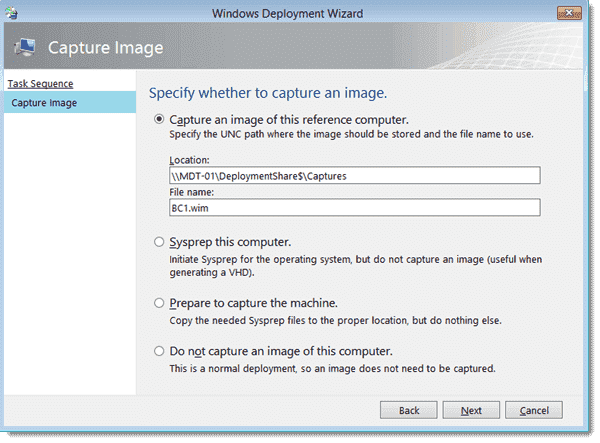 Ensure that “Capture an image of this reference computer” is selected.

The VM will continue through the Windows installation process. It will install any applications, roles, or features that you configured in the task sequence. It will fully update itself, reboot, and run sysprep. Finally, it will capture the reference machine into a WIM and shut itself down. You’ve completely automated the reference image creation process! The only thing you have left to do is to import the WIM into your Windows 8.1 deployment task sequence.

Leave a reply to Joseph Moody (Rank: 3)
Click here to cancel the reply