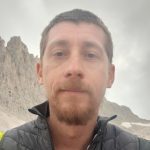 Riccardo Bicelli
Riccardo is a system administrator and software developer for small and mid-size businesses in Italy.

Latest posts by Riccardo Bicelli (see all)
Contents of this article

Let's have two sets for backup, SET-O and SET-E, used respectively in Odd Weeks and in Even Weeks. Every Sunday, the corresponding set will be overwritten by the full backup process. Every day, a differential backup process takes place.

To accomplish our task, we're using three scripts (or two, if you're running all your databases in the simple recovery model). The scripts have a common configuration section that has to be consistent.

We must set the backup path, folder names for odd and even weeks, and a list of excluded databases. Find this block and change the variable definitions relative to paths according to your setup.

Do this for every script you are using.

Next, you must create the target folders.

Assuming that backups will be stored under UNC path \\YOURSERVER\YOURSHARE\YOURFOLDER\, you'll have to create SET-ODD and SET-EVEN folders on that path prior to making the backups, since the scripts don't include logic for interacting with the file system.

This is the differential backup script:

For databases configured for the full recovery model, we have to make the transaction log backup to keep it small.

Depending on which version of SQL Server you are using, there are two methods of scheduling:

You can also specify the SQL Server user if needed: 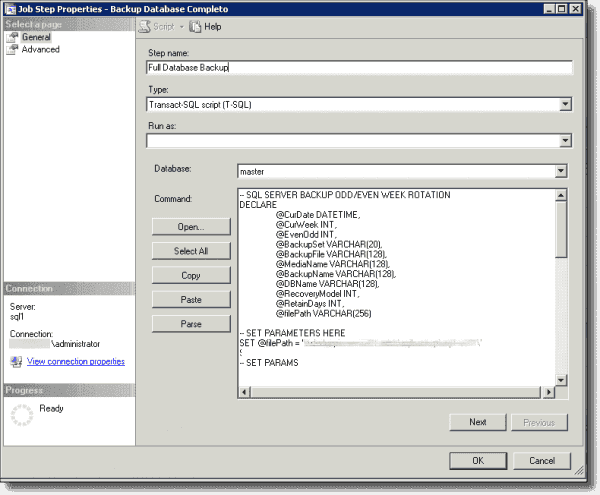 Simply copy:paste the script's contents in the command text area

In both solutions, you must:

If the backup process fails, it will record events in the application log and terminate the step, raising an error. 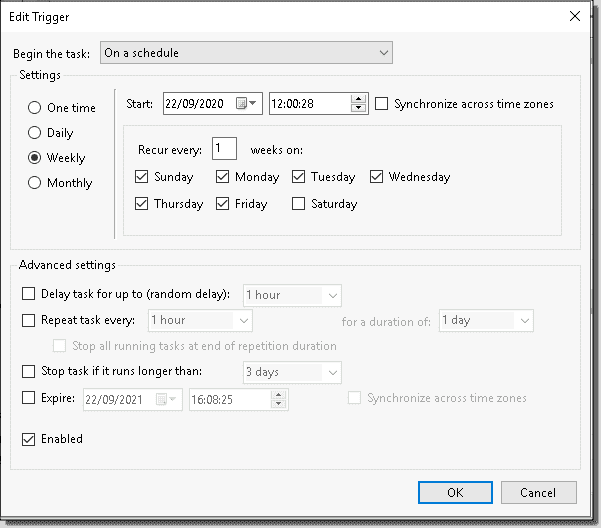 Differential schedule every day except the first day of week

Remember that either the assigned system user in the scheduled task or the SQL agent user needs write permissions to back up target folders.

Now we have a reliable tool for backing up our SQL databases.

Since the scripts have a lot of code in common, it is also advisable to turn the common parts into a stored procedure and put some parameters in tables, such as databases excluded from backup. I may explain this in a future tutorial.

You can download the updated version of the backup scripts from my github repo.