Michael Pietroforte  Thu, Dec 18 2014Thu, Dec 18 2014  azure, backup, cloud computing  0
Azure Backup not only allows you to back up Windows servers but also enables you to now secure data from computers running Windows 8.1, Windows 8, and Windows 7 SP1 to Microsoft’s cloud. I took a quick look at Azure Backup. Actually, there was not much to look at.
Contents

Changes in the new backup agent with respect to Windows clients appear to be minimal. For instance, the user interface still talks of registering the “server.” I also didn’t discover any client-specific backup features. At the moment, you can also only back up 64-bit Windows versions. 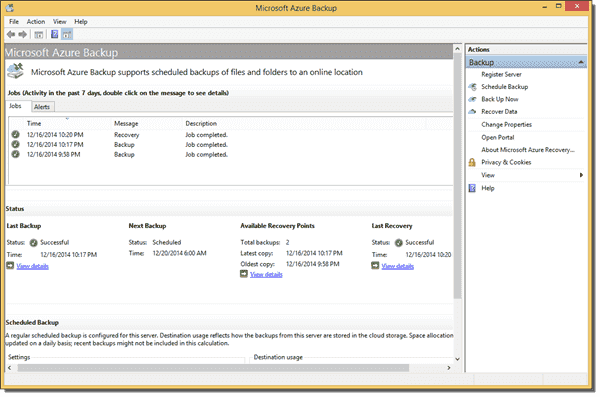 Azure Backup is a relatively simple backup solution that only enables you to back up data files. System backups are not supported; therefore, you can’t use the backup tool for disaster recovery. Installing a test environment took me about three minutes. You see, cloud computing can be fairly simple.

The first thing you have to do is create a backup vault in Azure’s Management Portal. The only decisions you have to make here concern the backup vault’s name and the region of the data center. You could choose the closest region, but, if you are preparing for a major terrorist attack, an asteroid impact or other calamities, you might as well back up your data to another continent. 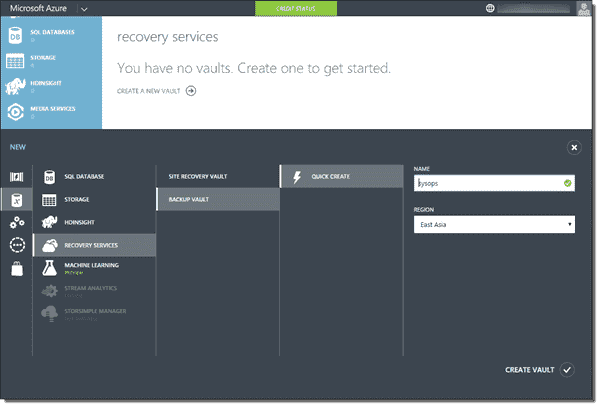 You can either create a backup vault for each machine or use a backup vault for up to 50 clients. The maximum number of vaults is 25. I suppose you could persuade your Microsoft sales representative to get more if this is not enough for your environment.

Next, you have to download the vault credentials, which are stored in an XML file. The credentials will expire after two days. 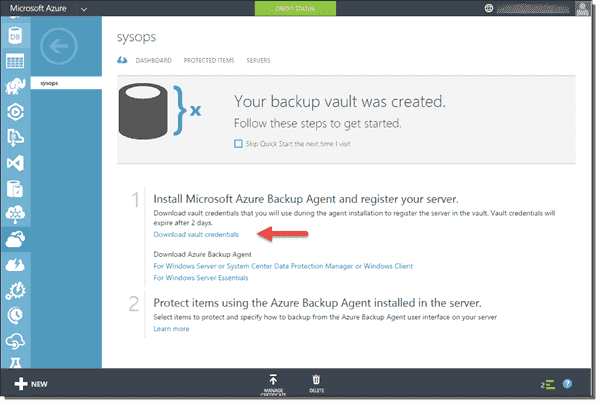 Downloading the backup agent is next on your to-do list. The installation of the 35MB file shouldn’t be a big challenge—unless you have to fight with bugs. In my case, after the installation finished, the setup program asked me to register the “server” (my Windows 8.1 computer). As requested, I provided the vault credentials and a passphrase, which produced the following error message: 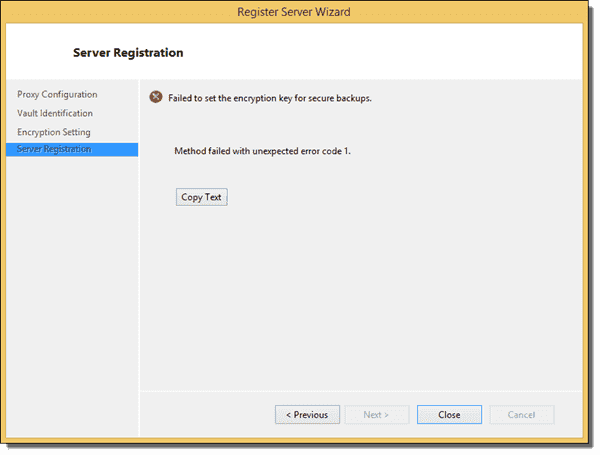 I can at least agree with the wizard that this wasn’t really expected at this point, and error code 1 didn’t sound so bad. I mean, an error code such as 13264 would definitely be more intimidating. I then started the registration wizard again from the Azure Backup agent, essentially with the same result except that I somehow expected the failure this time.

Next, I did what all admins do in such a situation. I tried to do the same thing, just in a different way, in the hope that the developer failed to integrate the bug in all possible ways. I copied the vault credentials to drive C: (they were previously on F:, which was a mounted volume on my virtual machine). I also went without my favorite passphrase and let the wizard choose it for me. In addition, I saved the passphrase to a local drive instead of to a mounted virtual drive.

To be honest, I didn’t really expect that this would make the unexpected error go away, but the registration wizard now greeted me with a much friendlier “Microsoft Azure Backup is now available for this server.” As my mood was immediately improved, I could even forgive the “server” in the dialog window. I leave it up to you to find out which of the three things I changed actually convinced the registration wizard. My attitude always is, if it works, then it works. 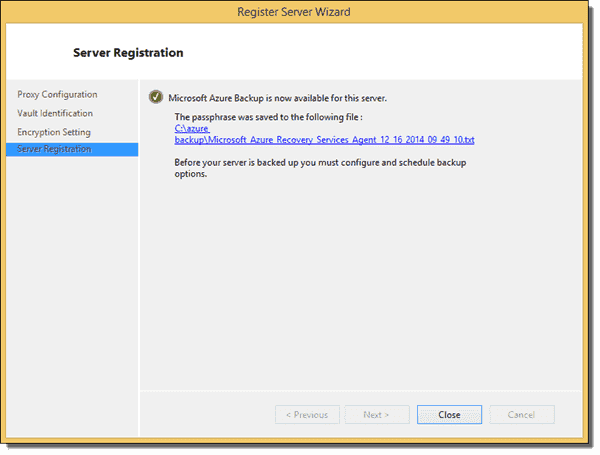 Microsoft Azure Backup is now available for this server.

As you might have noticed, at no point did I have to enter a server address. It is all in the Vault Credentials. After you see the above dialog window, your client will appear in the Azure Management Portal under Servers. 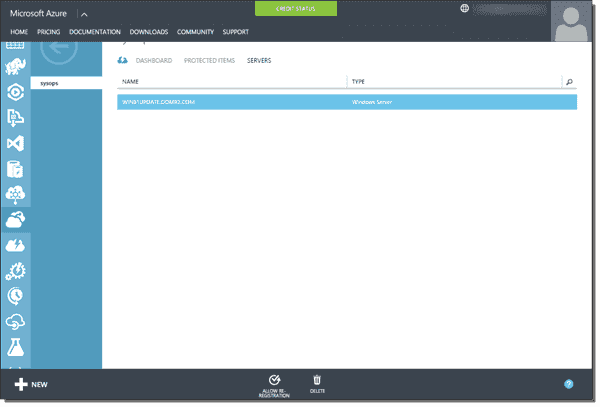 Because we are already in the Management Portal, let’s see what we can do here. You can’t really manage Azure Backup from Microsoft’s cloud interface. You only get an overview of usage data, and you can download some files such as the agents and the credential vaults. 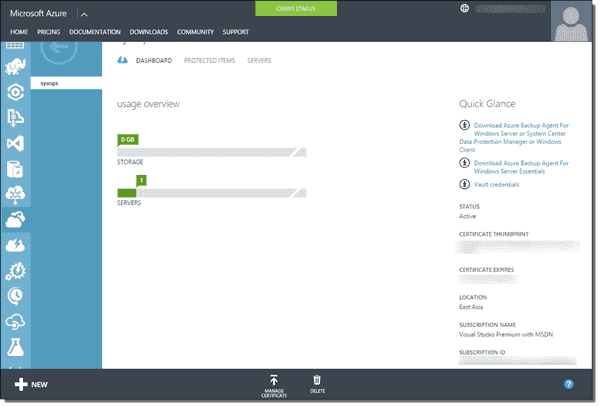 Yes, it is all a bit spartan. If you would rather express it more positively, you can also say it is a “minimalistic design.” The user interface of the Azure Backup agent avoids stylistic inconsistencies with the backend UI and only offers the minimum number of features every backup software requires. That is, you can select backup items (drives and folders), you can schedule backups, and you can restore backups. That’s it.

Scheduling backups is done in the old-fashioned way by configuring days and hours when the backup runs. This works fine on servers, but it is exactly how backups shouldn’t be done on clients. In my review of Veeam’s Endpoint Backup, you will find some examples of how modern backup programs for Windows clients determine the right backup time. 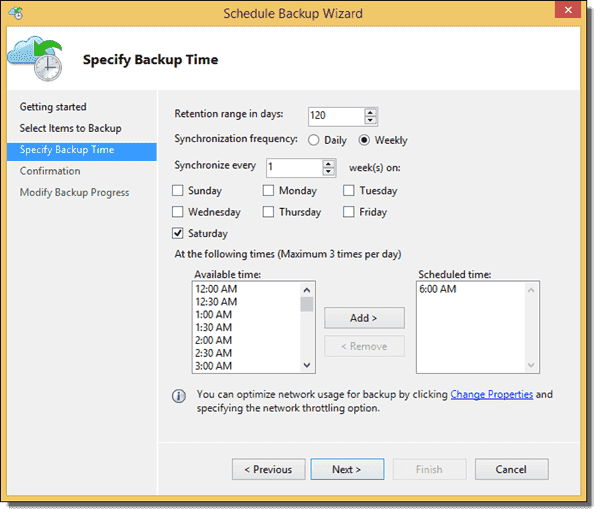 A welcome feature for a cloud backup solution is Internet bandwidth throttling. Perhaps it would have made more sense to integrate the throttling settings with the backup schedules instead of offering a separate configuration option. I also didn’t find settings for metered Internet connections. 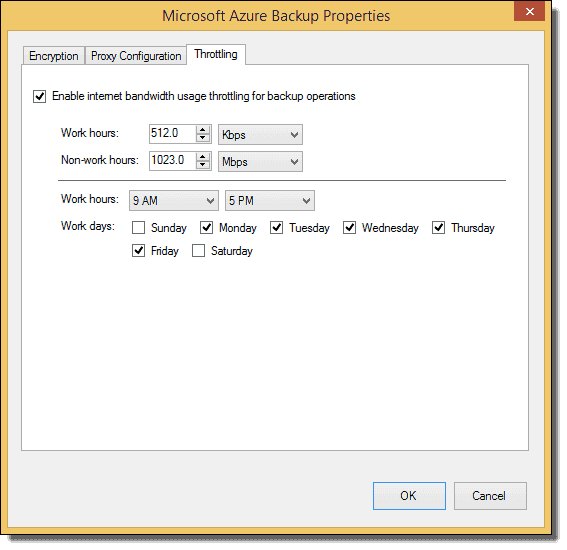 Alright, this is all a bit thin for the biggest software company in town. However, Azure Backup has two really convincing advantages.

For one, the pricing is rather fair. The first 5GB per month are free. After you consume the 5GB, you pay $0.20 per GB per month for the additional storage space you use. There is no minimum number of clients, no fees per client, and no long-term commitment. This is real cloud backup.

The second plus of Azure Backup is its remarkable PowerShell support. Microsoft’s cloud backup solution lacks a central management console that would allow you to deploy and configure agents and restore files from the backup admin’s computer. The numerous PowerShell cmdlets compensate for this because they allow you to automate many configuration tasks. Of course, if you have many Windows clients and a complex network infrastructure, you might end up programming your own backup solution. You have to add these costs to the $0.20 per GB.

You also have to ask yourself if a cloud drive solution such as Dropbox or OneDrive for Business (not the consumer version of OneDrive), which supports the recovery of old file versions, isn’t easier to deploy as a backup solution for Windows clients. In addition to continuous data protection, your users get the ability to access their files from multiple devices.

If you want to learn more about managing Azure Backup, you should look at this detailed documentation.