Jason Coltrin  Fri, Sep 30 2016Wed, Aug 15 2018  AWS, cloud computing, networking  4
In this second part of my AWS VPC series, I will explain how to create an Internet Gateway and VPC Route Tables and associate the routes with subnets. Then, I’ll show you how to create Network Access Control Lists (NACLs) and Rules, as well as AWS VPC Security Groups.

In the previous article, we provided an overview of Amazon AWS VPC security, created an initial VPC, and built two subnets. We now have a good foundation for moving into the core of a Virtual Private Cloud on the Amazon AWS platform. If you haven’t already done so, go back to the first article in the series and make sure you’ve caught up for the following steps.

We want to provide our upcoming instances with a way to get out to the Internet by creating an Internet Gateway (IGW). If you would like to learn more about VPC Internet Gateways, you can find an informative document here.

In the VPC Dashboard, click on Internet Gateways, followed by Create Internet Gateway. Provide the Name tag with something similar to IGW-4sysops, and then click Yes, Create.

After we create the IGW, you will see that the state of the IGW is detached. So, we now need to attach a VPC to our new IGW. Do this by clicking on the Attach to VPC button, select the VPC you created previously (4sysopsVPC), and then hit Yes, Attach.

Now that we have our Internet Gateway attached to our Virtual Private Cloud, we want to create some route tables. We’ll define two Route Tables, as shown in red in the following diagram. The first will be a Public Route Table from the Public-Subnet to the IGW, which will allow our Public-Subnet to reach the Internet. The second route will be a Private Route Table that will allow both our Public and Private subnets to communicate with one another. 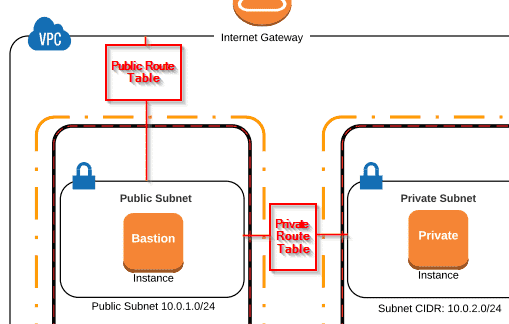 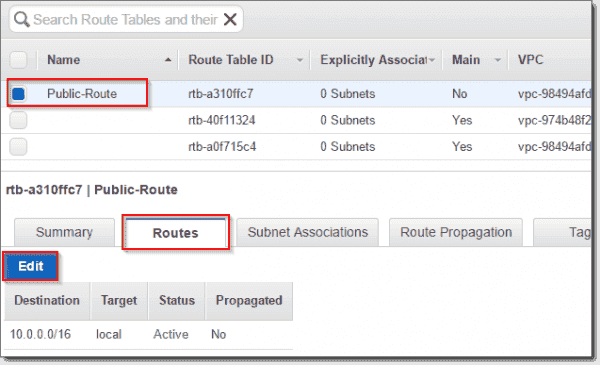 Click Add Another Route for traffic going outside of our VPC. 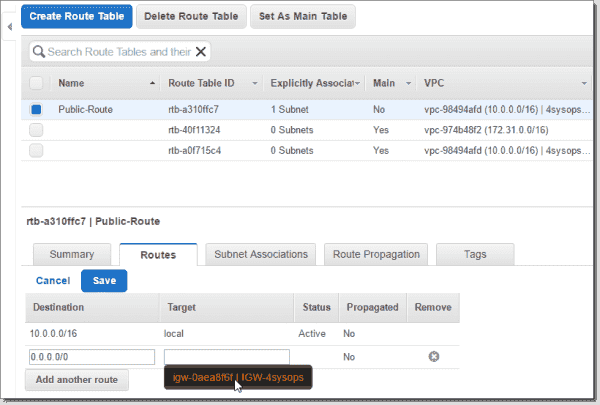 The 0.0.0.0/0 subnet says that any traffic not bound for our local network will go out the Internet Gateway.

Next, we need to associate the Public-Route with our Public-Subnet. With Public-Route selected, click on the Subnet Associations tab, click Edit, place a checkmark next to the 10.0.1.0/24 | Public-Subnet, and then click Save. 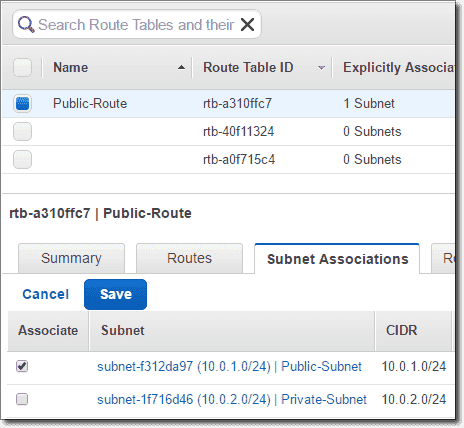 There is no need to edit or add any additional routes under the Route Tab for the Private-Route. This is a private route only within our VPC, so all traffic is okay to communicate with any other subnet inside 10.0.0.0/16. However, we do need to associate the Private-Route with our Private-Subnet. To do this, again,with the Private-Route selected, on the Subnet Associations tab, click Edit, place a checkmark next to the 10.0.2.0/24 | Private-Subnet, and then click Save.

When we’ve created our Route Tables, we should see the following tables listed, as well as an explicit subnet association for each of them (Public-Route to Public-Subnet and Private-Route to Private-Subnet): 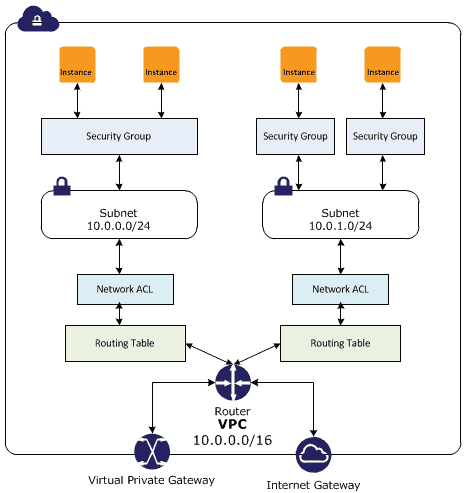 Create a new inbound rule by first clicking on the Inbound Rules tab and then Edit. Add Rule # “100” > All TCP coming from Public-Subnet source 10.0.1.0/24, we select Allow and then Save.

Because NACLs are stateless, do the same in the Outbound Rules: ALL TCP destination: 10.0.1.0/24 Allow (Public-Subnet).

Next, go to the Subnet associations tab and associate the Private-NACL with the Private-Subnet.

We will now essentially replicate our Private-NACL to a new Public-NACL, with similar rules.

Add another rule for the Private-Subnet to communicate with the Public-Subnet.

Similar to our inbound rules, because we are modifying stateless connection traffic, we need to do the same for outbound traffic. 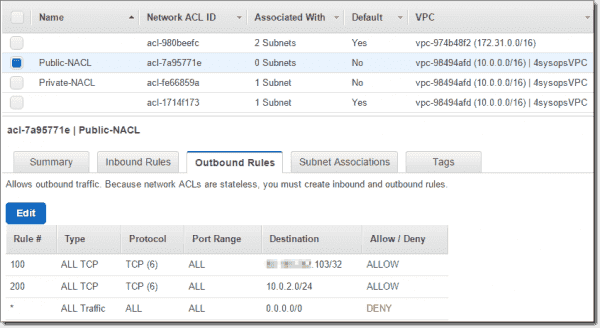 Now we have our NACLs set up to allow all TCP traffic to and from our home IP address to the Public-Subnet and, also, all TCP traffic between the two subnets is allowed.

Along the same lines as the other security measures, we’ll create a second security group named Private-SG.

Next, we’ll configure the inbound rules for the Security Groups, and we’ll narrow down the traffic to just the management protocols we’ll use to access the instances. First, we’ll start with the Private-SG and go to the Inbound Rules tab > Edit > Type: SSH (22) Protocol: TCP (6) Source: Public > Save. Creating this rule will allow port 22 from the public security group to access the private security group.

With the majority of our work complete, our next article in the three-part series here will show how to create two AWS instances in our VPC, how to securely connect to the Bastion instance, and, finally, how to use Pageant and SSH to connect through our Bastion host to our Private Instance.

Leave a reply to Srinivasa Click here to cancel the reply