Back in April 2016 I wrote a review of NAKIVO Backup & Replication v6.0; please feel free to read that piece first if you're new to the product:

In that article I created a Visio diagram that sums up how the NAKIVO Backup & Replication solution works. Check it out here and I'll explain:

Now let's have a look at what's new and what's improved in NAKIVO Backup & Recovery v6.2.

Perhaps the biggest addition to NAKIVO Backup & Replication v6.2 is the support for AWS EC2 instances that are sold through the AWS Marketplace, and a generally tighter integration with the AWS cloud in general.

Previous product versions allowed you to back up your own internal VMs to EC2 instances, but you weren't able to work with Marketplace-obtained images, such as the PHP with IIS on Windows Server 2012 R2 image as shown in the next screenshot. 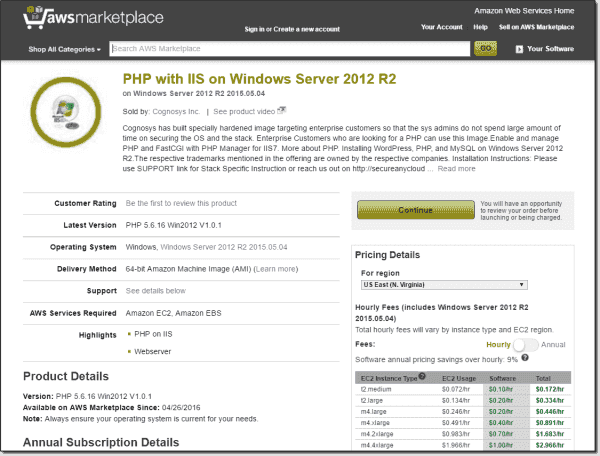 Another key new feature in v6.2 is automated transporter deployment to the AWS cloud. When you create a backup job that involves AWS, the configuration wizard will prompt you to deploy a transporter instance in AWS.

To that point, v6.2 can also be configured to automatically turn off AWS-based transporter instances. This is a thoughtful addition that will save your business money as you won't pay for EC2 instance runtime that is otherwise wasted when the transporter doesn't have any work to do.

Finally, we have an improved alarm and notification display in the job and group dashboard views. As you can see in the next screenshot, the Info widget (circled in the figure) aggregates alarms and notifications for easier review. 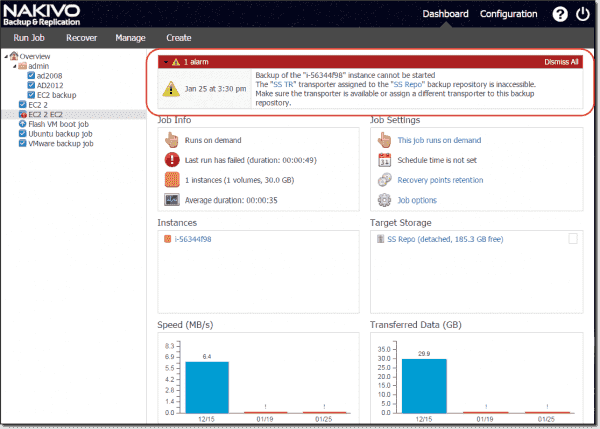 The NAKIVO dashboard makes it easier to view alarms and notifications

NAKIVO resolved a number of bugs left over from the previous release. For instance, v6.2 fixed the issue where VMware ESXi hosts that use the same management IP address could not be added to your NAKIVO Backup & Replication inventory.

Another fix was correcting an invalid product version shown in the Windows Programs and Features Control Panel. Yet another fix addressed a rounding error-related discrepancy between the same data as viewed in the job report and dashboard views.

You can view the v6.2 Release Notes on the NAKIVO website at your convenience.

In v6.0.1, the standout new feature was native integration with Synology network-attached storage (NAS) appliances. Specifically, you can now use a native Synology package to install NAKIVO Backup & Replication on the appliance.

In v6.0.1, NAKIVO added quite a bit of new functionality to support Microsoft Exchange 2013 and 2016. The product can now perform Exchange object recovery and log truncation. The release also introduced compatibility and support for Windows 10.

From v6.1.1, NAKIVO Backup & Replication can display 500+ transporters and repositories in the management console. Also, the solution automatically creates its own shared folder repository when it's installed on Synology DiskStation Manager (DSM) 6.0 or later.

NAKIVO Backup & Replication v6.2 is now available and you can now download a free trial.