Michael Pietroforte  Fri, May 2 2014Tue, Apr 29 2014  android, AWS, cloud computing  0
For this test, I tried five AWS apps that allow you to manage Amazon’s cloud from your Android phone or tablet. This post gives an overview of the features of these cloud apps and compares their supported AWS services in a table.

A while back, I reviewed Decaf, a nifty Android app for EC2. This app has ensured several times already that 4sysops stayed online without interruption. When I first tried the app, I had an Android phone with a three-inch screen and weighed 88g. I must admit that, at the time, I found it quite fascinating to manage servers comfortably using only my right thumb on a device that I could carry in the front pocket of my shirt without even noticing it. The “anytime, from everywhere” mantra that I have heard for years from web app makers had become real, except that it wasn’t a web app but a mobile app. On the beach, in the mountains, in the taxi, or in the bathroom, just a few taps with my thumb and the stubborn server was alive again.

At that time, Decaf was the only Android app available for Amazon’s cloud. In the meantime, quite a few new AWS apps have popped up in Google’s app store. Whereas Decaf still costs $13, all the other AWS apps I tested for this article are free. That is what I like about Android. Many good apps are free or come at the price of an espresso.

Amazon updated their AWS Console for Android a couple of days ago with S3 support. Unfortunately, AWS Console only allows you to browse buckets and view object properties. You can’t download objects from within the app. This applies to most of the services that the AWS Console supports.

The app only enables you to start, stop, reboot, and terminate EC2 instances. However, where the AWS Console shines is in the details of the information it provides for quite a few AWS services (see table below). No other app comes close in this discipline. 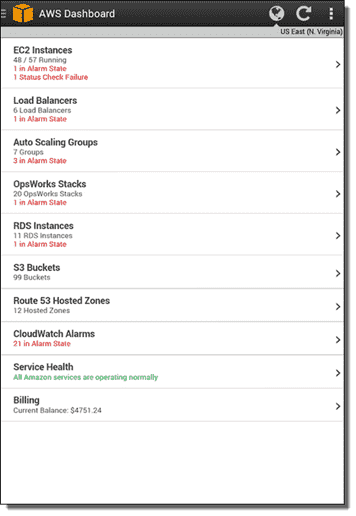 The thing I dislike about Amazon’s cloud app is that it wanted me to reenter my password when I hadn’t used the app for a while. This is probably a security measure. However, considering that password managers such as KeePassDroid are cumbersome to use under Android, this could tempt some admins to use weak passwords.

All other apps I tested don’t use the Amazon account for authentication; rather, they allow you to provide an Access Key ID plus a Secret Access Key that they store on the phone. Of course, if your phone gets lost and you don’t protect your beloved gadget with an access password, you have a problem.

However, you can create an Access Key ID just for your mobile apps, which enables you to disable this key quickly without much hassle. Hence, I’d say the risk is worth taking if you work regularly with the app to store AWS keys on the phone. If you don’t like to enter a password every time you use your phone, you can add some extra security with the free Smart Lock app to protect your security-critical apps.

AWS for Android supports S3, EC2, AMI, EBS, Snapshots, and Elastic IPs. Not only can you view the objects of these services, but you can also manage them. You can also download S3 objects and even create new buckets. 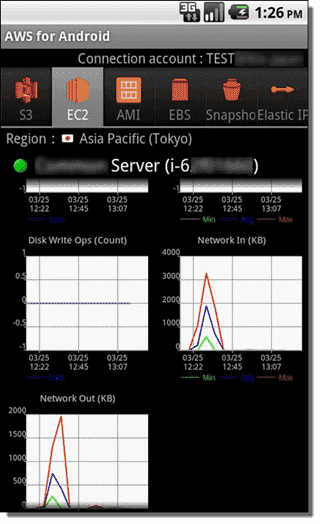 The user interface is nice and easy to tap. Unfortunately, the app is a bit unstable with shaky Internet connections, which is not uncommon on a mobile device. AWS for Android allows you to work with multiple Access Key IDs, which makes the tool interesting for contractors who want to keep an eye on the servers of their clients.

AWS Manager also supports multiple Access Key IDs and shares the stability problem with AWS for Android. I couldn’t test the AMI feature because the app immediately crashed whenever I selected this option. The app is also a bit parsimonious with the information it provides about the services it supports. This tool wouldn’t be my first choice. 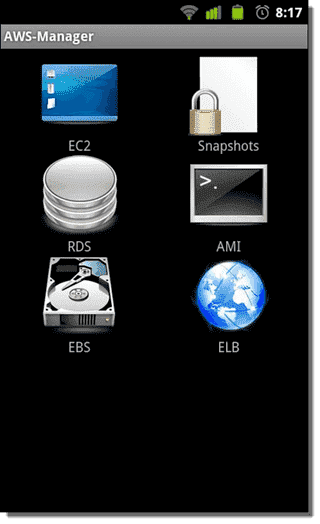 Cloud Hub would be a better choice because it was stable during my test and it supports the largest number of services. Nevertheless, it is a powerful tool that supports multiple accounts and regions. The list of supported services is impressive. Note that the app offers different views in portrait and landscape mode. 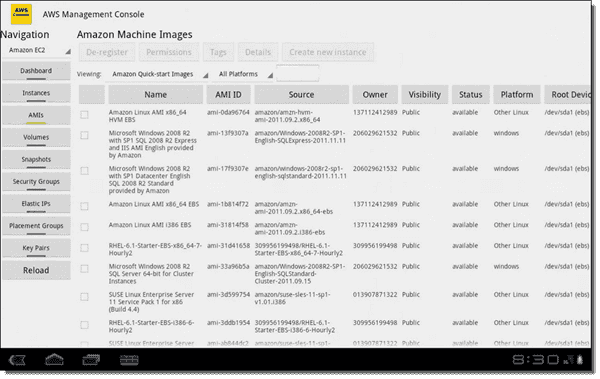 Decaf hasn’t been updated for quite a while, which is a shame because I think it has the best user interface of all apps in the test. It is still my favorite AWS app because it provides detailed information about the AWS services and has all the management capabilities I need on a phone. Its one downside is that it only supports services around EC2. Thus, whenever I want to access an unsupported service, I have to switch to one of the other apps. However, since all the other apps are free, this is not a big deal. 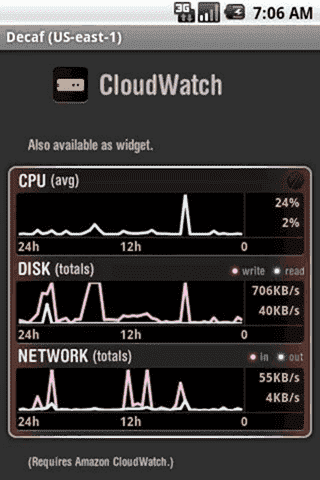 The table below gives you an overview of the services each of the AWS apps support. A “v” in the table means that you can only view the properties of the service and its objects; an “m” signifies that the app also offers management capabilities. Note that the functionality the apps provide for the various services can differ significantly. Thus, I encourage you to try the apps that support the services you need. It won’t cost you much time.

I found a few other apps, but they didn’t make it into my test because the numbers of downloads and votes were too small. I don’t really feel like entering my AWS credentials into an unknown app. AWS Mission Control, Eazy2, and AWSManager belong to this category. Maybe AWS Mission Control and AWSManager are just not popular because they are not free. I also tried AWS EC2 Manager, but the app crashed whenever I launched it.

By the way, the sheer number of management apps for AWS demonstrates nicely what it means to work in the most popular cloud. We live in a huge ecosystem of tools and service providers. No other cloud provider can compete with Amazon here.

Only three years have passed since I first reviewed a cloud management app for Android. It struck me as very geeky at that time, yet now it is the most common thing in the world to manage servers in the cloud from a phone. Perhaps even more fascinating is how fast we get used to these technological revolutions that come in ever shorter timespans (law of accelerating returns). Last week, Google Glass became available to the public. How long will it take before we manage our servers by just looking at them in cyberspace? There will be no more type-type, click-click, or tap-tap, but only blink-blink—information at the blink of an eye.

Please let me know in a comment below if you work with another cloud app.