Configuring, installing, and making changes to a Windows environment through the GUI can be extremely cumbersome, especially at scale. Generally, when thinking about automation, it is a prerequisite to have network connectivity to your Windows machine. However, let's take a look at using Ansible to power your automation. Ansible provides several modules that allow you to automate your Windows environment without a network connection.

If you haven't looked at Ansible for automating your Windows environment, take a look. It provides a great way to automate your environment using very simple "playbooks" that can be executed against your Windows hosts for provisioning, configuration management, and other very helpful tasks.

The great thing about Windows automation is that it is agentless. It works with the native Windows PowerShell remoting capability to provide easy, native Windows management for your environment. Using the agentless approach that Ansible provides, you can easily perform the following tasks in Windows:

Let's take a look at how you can easily automate your Windows virtual machines using Ansible without network connectivity.

Let's consider a few use cases.

What are the use cases for needing/wanting to perform automated tasks using Ansible when there is no network connectivity? A few come to mind, including the following:

The above are only a few of the use cases among many that Ansible can solve, with its ability to automate Windows without network connectivity using VMware Tools. So, how is this accomplished using Ansible?

There are a couple of Ansible VMware modules that I want to focus on that provide the functionality to automate Windows without having a network connection; instead, they provide PowerShell remote-assisted automation. In case you are not familiar with Ansible and its use of modules, what are they?

Ansible modules are scripts that Ansible makes use of by way of the Ansible API as well as the ansible and ansible-playbook executables. These modules are reusable and provide JSON string output before exiting. Ansible includes many "in-the-box" modules that can be used to interact with various platforms, including VMware, Windows, Linux, and many others.

Let's look at the following modules you can use to automate your Windows environment through VMware without network connectivity.

The first module to take a close look at is the vmware_vm_shell module. Using this module, you can do anything you want to do by running PowerShell commands or scripts inside your Windows environment without having connectivity at the network level.

You will need to authenticate to your vCenter/ESXi host as well as the Windows guest operating system to run commands. However, once authenticated, you can easily configure your Windows machine without limitations outside of PowerShell.

Let's take a look at an example of a code snippet where we will change the DNS server value of a Windows guest while the network adapter is disconnected. The quick and easy playbook using the Ansible vmware_vm_shell module looks like the following. Take note of the variables that I have included in a test-vars.yml file:

As you can see, we are simply using the Set-DnsClientServerAddress PowerShell cmdlet to carry out the change to DNS. However, the vmware_vm_shell Ansible module is the vehicle that interacts with the Windows guest VM. Does it work without network connectivity? 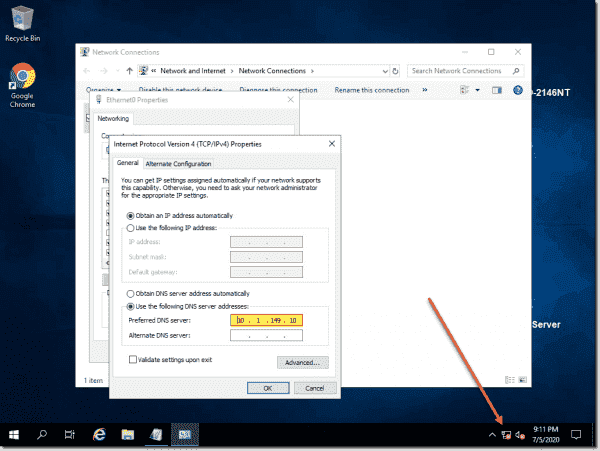 Network is disconnected on a Windows test VM

After running the playbook, the DNS server value has changed to the 8.8.8.8 value set in the variables file. So, even with the network adapter disconnected, we are still able to run PowerShell commands inside the Windows virtual machine via VMware Tools. 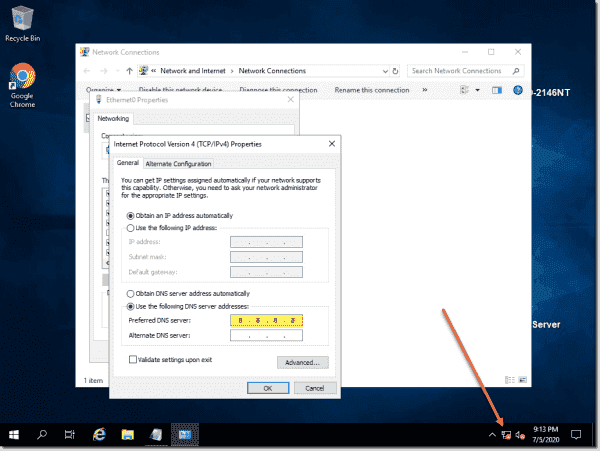 DNS server value is changed even with the network adapter disconnected

Another really powerful little Ansible module that allows getting files over to your Windows guest operating system running in your vSphere environment without network connectivity is the vmware_guest_file_operation module.

As part of the same test Ansible playbook, I am copying a PowerShell .PS1 script to a custom folder on the Windows machine. Below, you can see that the fixdomain.ps1 script is set to be copied from the resources folder on the Ansible box to the target Windows directory.

Does it work without network connectivity? As you can see below, after running the playbook, the file is successfully copied to the Windows machine without the network adapter connected. 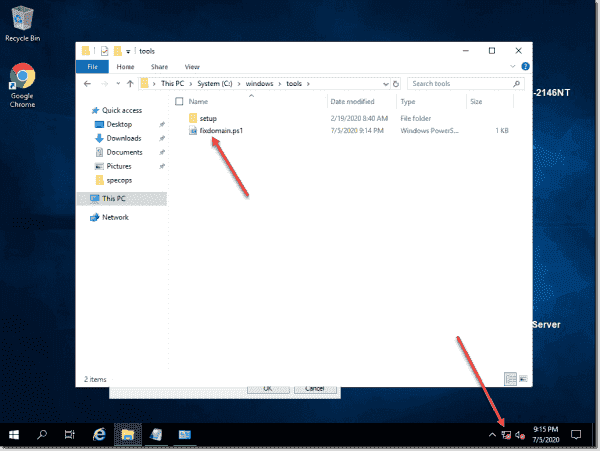 Ansible provides a really great toolset for automating your Windows environment. If you have Windows guest virtual machines running inside your VMware vSphere environment, Ansible provides modules to interact with the guest operating system even if the network adapter is not connected.

This is accomplished with an out-of-band connection using VMware Tools running inside the Windows guest operating system. With the vmware_vm_shell and vmware_guest_file_operation modules, you can run scripts as well as copy files to a Windows machine without network connectivity and automate operations independent of the status of your network connection.