As Windows administrators, let's face it, one of the most arduous chores we have to accomplish when provisioning a new Windows Server is installing Windows updates. Windows updates are critical to routine Windows Server administration. Security is on the forefront of everyone's focus. Thus, keeping patches applied is crucial to ensure patching vulnerabilities and other exploits before there's a chance to expose the server to an attack vector due to the unpatched security vulnerability.

However, controlling Windows updates is a pain for administrators. Microsoft hasn't updated or modernized their Windows Server Update Services (WSUS) since legacy versions of the Windows Server operating system. It can be difficult to manage and even unreliable at times. Let's take a look at how to automate Windows updates with Ansible and see how we can successfully patch Windows Servers quickly and relatively easily using the power of Ansible automation.

Loading a supported distribution of Linux with the prerequisites and requirements for both Ansible and supporting modules (Kerberos, etc.)

Configuring an Ansible Server is as simple as installing a supported distribution of Linux such as Ubuntu Server (we will use this as the reference Linux operating system throughout the post) and then installing both the ansible package as well as pywinrm. The pywinrm package is what allows Ansible to communicate to Windows Servers via WinRM instead of Secure Shell (SSH).

Make sure to update your Ubuntu Linux distribution:

Also, to make Python package installation easier and more robust, let's install pip. What is pip? It's a package management system used to install and manage software packages written in Python. To install pip, run the following in Ubuntu:

Now we can use pip to install both the pywinrm package as well as Ansible itself using the two following commands:

We can verify this successfully installed Ansible by querying the Ansible version using the following:

Checking the Ansible version after installation

Configuring the WinRM connections required to connect Ansible to the Windows Servers involves a few tweaks to the WinRM configuration settings on the target servers. A great way for easily making the changes necessary for WinRM communication is simply running the ConfigureRemotingForAnsible.ps1 script. This community-driven script enables WinRM properly to communicate with the Ansible server. The script also enables the required Windows Firewall rules as well as PowerShell remoting and is an easy way to make all the necessary changes for Ansible communication at once.

But how do you bootstrap a Windows Server you don't have remote access to via WinRM or PowerShell remoting? You can either bake the needed changes into the image used for provisioning, or for existing machines with an internet or network connection, you can use psexec to pull the script down and run it on the target Windows Server using a command like the following:

You can download the latest version of the script from GitHub.

Unsuccessful WinRM test from Ansible due to expired Kerberos credentials

Now that we have gone over the basics of setting up an Ansible server for Windows communication and seen how to ensure successful WinRM communication, let's look at how we can use this connection to automate Windows updates with Ansible.

If you want to install only specific updates based on the KB numbers for a specific category, you can specify those updates via the whitelist directive in the YML code.

If you simply want to check for missing updates, you can run the following:

What if you want to install the updates and reboot if the result records a reboot is necessary?

An example inventory file will look like the following:

A sample windowsupdates.yml playbook might look like the following, which directs the installation of security, critical, and update rollups:

You could do something like the following: Configure the domain controllers (DCs) in this case with the settings in the windowsupdates.yml file.

If a target machine is offline, Ansible will simply display the error connecting to the target machine and move on to the next server in the list to update.

In the example below, we are searching for all available updates and piping these out to c:\ansible_wu.txt. We can do this with the following code:

Running an Ansible playbook to search for available Windows updates

The snippet below shows the contents of the c:\ansible_wu.txt file with the available Windows updates pulled from running the Ansible playbook. 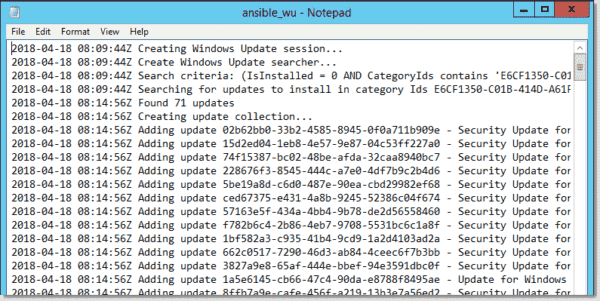 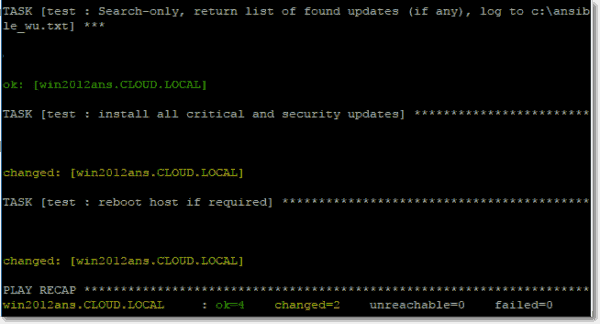 Results after installing Windows updates and rebooting with Ansible

Here we have a snippet of the Windowsupdate.log file showing Ansible indeed installed the updates.

A downside of using Ansible for deploying updates is that you can only target computers currently online. Thus, this solution works well for Windows Servers but not for workstations that could be offline when you initiate the update process. Automation in general is required in today's fast-paced world of DevOps. Being able to provision virtual machine software quickly, including Windows updates, allows administrators to be efficient, effective, and consistent in provisioning Windows Servers in the enterprise datacenter.