Ansible is a great automation tool for configuration management, allowing an automated means of implementing changes across a server environment. This includes the ability to automate both Windows and Linux server configurations. In general, you can run Ansible freely by downloading the module and running configurations and playbooks from the command line. However, this may not scale well in many environments, such as those with multiple admins, a GUI interface, REST API access, and centralized management.

Red Hat Ansible Tower is Red Hat’s commercial Ansible offering that fills the needs listed above; however, you may not be aware of the AWX Project from Red Hat. It provides an open-source version of Ansible Tower that may suit the needs of Tower functionality in many environments. Let’s take a look at Ansible Tower vs Ansible AWX for Automation and see which one you should choose.

What is Ansible Tower?

Ansible Tower may be the more familiar option for Ansible users as it is the commercial GUI Ansible tool that provides the officially supported GUI interface, API access, role-based access, scheduling, notifications, and other nice features that allow businesses to manage environments easily with Ansible. Once an organization is operating Red Hat Ansible at a particular scale, it can become difficult to manage its Ansible automation environment when using the simple Ansible command-line tools.

Red Hat Ansible Tower is the solution to this problem as it provides the more ‘enterprise’ features to the solution by allowing a more scaled approach for multiple automation users/access and providing the integrations that most expect from an automation platform. 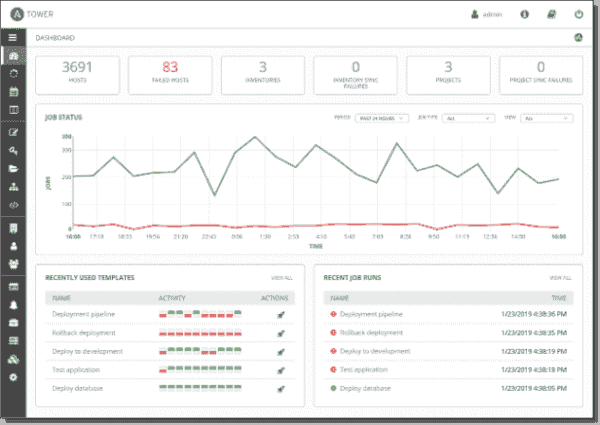 When looking at Scaling, Tower provides the following:

Ansible Tower is a commercial ‘pay for’ product that comes in two versions – Standard and Premium. Looking at the two versions, the prices range as follows:

If you want to test out Ansible Tower in a POC environment or simply use it in a small lab, Red Hat does offer a free 10-node license that allows you to use full enterprise features for up to 10 nodes with Tower. You apply for this license when requesting the license key. It is noted as a self-support (10 managed nodes) license.

What is Ansible AWX?

Ansible AWX is the open-sourced project that was the foundation on which Ansible Tower was created. With this being said, Ansible AWX is a development branch of code that only undergoes minimal testing and quality engineering testing. There are other drawbacks to enterprise adoption, including the lack of signed images for using it in the enterprise, support being offered, and a complex or lack of real versioning being present with upgrades.

Ansible is planning on continuing to mature the product lifecycle of Ansible AWX so that it is in tighter lock-step with Ansible Tower releases. However, Ansible AWX is a powerful open-source, freely available project for testing or using Ansible AWX in a lab, development, or other POC environment.

Perhaps the greatest benefit of AWX over Tower is that you have all of the enterprise features for an unlimited number of nodes. You are not limited by the free ’10-node’ limit for Ansible Tower. Basically, one of the major differences you will see between AWX and Tower is a different logo for the products. They look extremely similar.

What are the System Requirements for AWX? 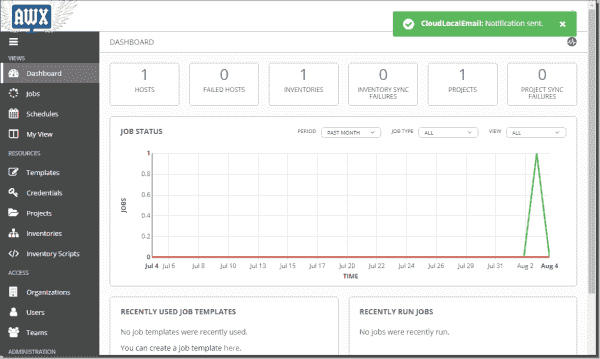 When looking at the two different products from Red Hat to provide GUI access to Ansible tooling and automation, which product would you choose? Well, each product has its strengths. Let’s take a look at a quick high-level look at the pros and cons of each solution and why you would choose each for comparison.

Ansible Tower is the full-blown commercial product that is supported by Red Hat and offers what you would expect from a ‘pay for’ product providing tooling or other automation services, including support.

Ansible AWX is the open-source GUI Ansible automation tool from Red Hat that allows you to be able to have basically all of the features and functionality from Ansible Tower in a freely available format. In fact, it is noted from Red Hat that Tower is based on AWX. Let’s look at the pros and cons of Ansible AWX.

Do you choose Ansible Tower or Ansible AWX?

Since both Ansible Tower and AWX provide GUI management, API access, role-based security permissions, and the ability to scale across a large Ansible-driven automation solution, which do you choose? This decision basically comes down to stability and support. Most likely, in an enterprise production environment, stability and support are extremely important.

Ansible Tower is the supported enterprise automation platform that provides a stable, fully-tested, and supported release for both greenfield installations and upgrading. For production environments, Tower is definitely the product to choose.

When looking at Ansible Tower vs Ansible AWX for Automation, it comes down to stability and support and where your needs may be. While you can use Ansible AWX for production, you will be running without the support and stability that comes with a well-tested software release. Ansible Tower is the fully tested GUI platform for providing centralized management, RBAC, and API access for production environments.