Amazon WorkSpaces – VDI in the cloud

Michael Pietroforte  Tue, Mar 18 2014Tue, Mar 18 2014  AWS, cloud computing, deployment  9
In the last part of my WorkSpaces series, I will explain why I am not really a friend of VDI and why I believe that Amazon’s DaaS is a game changer

I have to admit I am a pronounced opponent of VDI. In my view, the poor user experience of remote desktops, which is often put forward as a major downside, is only a slight problem. I think many VDI advocates overestimate the benefits of running desktops at a central location.

Whereas a central location may have been an advantage in the times when sneakernet administration was common practice, with all the powerful remote management tools we have nowadays, it doesn’t really matter where the desktops are physically located. Disaster recovery, frequent updates, desktop customization, and so on can all be done remotely as long as the desktops have a good network connection. And security? Same argument. Desktop firewalls, anti-malware, intrusion detection, etc., everything can be managed remotely. If you have the same security settings on all your computers, your attack surface is essentially the same no matter if you have 10 or 1000 physical machines.

A major disadvantage of VDI is that you are working in an uncommon environment, which usually causes numerous problems that don’t exist on physical desktops. I have quite some experience with installing software on Citrix servers, and I can tell you it is not fun.

At my former employer, we provided all kinds of bibliographies, eBooks, and eLearning software for a university with 50,000 students. You can imagine that we had to install quite a few different applications (hundreds) on our Citrix servers. I can assure you that we ran into countless problems that you have never seen. And the more software you pack on your servers, the worse it gets.

A single Windows desktop will get more and more unstable over time as you install more updates and software. This problem is multiplied by the number of virtual desktops you run in a server environment.

Of course, in a strict sense, session-based Remote Desktop Services is not VDI. If hardware virtualization comes into play, the virtual desktops are separated from each other just like with physical desktops. The problem with software conflicts is therefore the same as with conventional desktops. However, running a large number of virtual machines for end users at a central location causes other problems.

In most cases, you have to add quite a bit of additional hardware and software to your datacenter, which means more (not less) work for admins. VDI is complicated and requires experienced (and expensive) admins who are able to manage redundant, highly available, and usually very expensive server systems. Even if you save a little with your thin clients compared to costs for PCs, the high costs of your additional server hardware, server racks, additional network bandwidth and equipment, air conditioning, and so on eats these savings up in most scenarios. I don’t want to mention the additional licensing costs and license management nightmares. I think nowadays nobody seriously believes that you can save costs with VDI.

In addition, you always have to ensure that enough resources are available and that everything is in perfect condition because, if your VDI goes down, your company will probably go down too. This keeps VDI admins busy and guarantees a heart rate constantly above those of common desktop admins.

VDI in the cloud ^

I could go on for a while with my rant against VDI, but I think you got the picture. So, if I am such a VDI fan, are you wondering why I am reviewing WorkSpaces on 4sysops? The answer is simple. The cloud changes (almost) everything. As mentioned in my introduction, Amazon takes care of the “I” in “VDI,” and it is mostly the “I” part that makes VDI such a nightmare.

With DaaS in the cloud, you never have to worry about the available resources, redundancy, bandwidth, and so on because this is the daily job of Amazon’s cloud experts. Since Amazon does not work with Remote Desktop Services, and each WorkSpace is a single instance, you don’t have to worry that your servers will get bloated over time. Best of all, the calculation of your VDI costs is super easy because you simply add the number of your WorkSpaces users and multiply that by the price of your WorkSpaces bundles.

Amazon WorkSpaces is real cloud-based DaaS. Some DaaS providers just slap "cloud" on their products for marketing reasons but only offer simple online services. In Amazon’s cloud you don’t have to commit for a year or longer and if you want, you can just run one virtual desktop. You can add new desktops one by one or remove unused desktops any time. This brings the agility of cloud computing to DaaS. Thus I do believe that Amazon WorkSpaces is a game changer in the DaaS market.

The “almost” in parentheses above refers to the fact that you will still be working in an uncommon environment, which can cause new problems. You have to be prepared that, in the beginning, you will need time to learn how to deal with WorkSpaces and Amazon’s cloud. Even if you have experience with virtualization solutions, the cloud is definitely a different beast.

Although I like WorkSpaces, I doubt that many organizations will move all their desktops to AWS any time soon. It will take a while for us to know how reliable the service is and what additional problems it can cause.

In my view, WorkSpaces is particularly interesting for special environments where VDI can outplay its advantages. Some examples are teleworking, branch offices with low bandwidth, application provisioning across organization boundaries, and all scenarios in large organizations with many branches where users have to access one or two applications from many different locations. 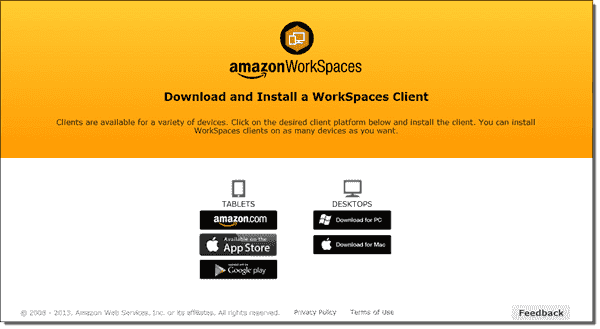 Organizations who want to move their desktops and laptops to an alternate operating system, such as Android, can use Amazon’s DaaS for running Windows applications on post-PC devices. Of course, this is what makes DaaS so dangerous for Microsoft, and it is probably the main reason why they have been screwing the desktop virtualization industry, as Brian Madden once put it.

As much as I admire Brian’s heroic deed of giving up his MVP title for the better cause, I think it is Microsoft’s right to ensure that their own business is not endangered by their licensing policy. We will see what Redmond could do to make WorkSpaces unattractive when it becomes obvious that organizations use this service mostly as a transition technology to the post-desktop era.