Before you can launch an Instance, you have to set up a few things. First of all, you have to create an EC2 key pair, which can be done with just a mouse click with the AWS Management Console. The key pair is required to connect to the Instance because EC2 will encrypt the default Administrator password of Windows Instances with it. For Linux Instances, the key pair is used to establish an SSH connection. 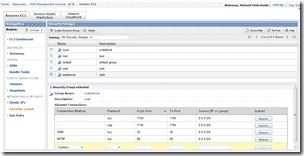 The next thing you should do is create a security group. Security groups are nothing but firewall rule sets. All Instances are protected by an external firewall. Whenever you launch an Instance, you can assign one or multiple security groups (rule sets). It is not possible to assign a different security group once the Instance is running. However, you can change the rules of a security group while it is assigned to an Instance. The supported rule types are rather limited compared to modern firewalls. However, I suppose it will be sufficient in most cases.

If you want to assign a fixed IP address to an Instance, you have to allocate an IP first in the Elastic IPs pane and then associate it with the Instance. This can be only be done while the Instance is running, i.e. it is not possible to associate an IP to an AMI (OS image). Note that Amazon doesn't charge for IPs while in use, but non-associated IPs cost $0.01 per hour. I suppose, this is just a token fee, so that people don't reserve hundreds of IPs. 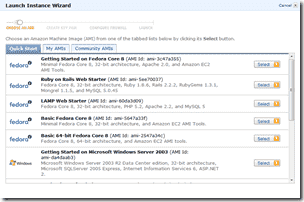 The best way to launch a new Instance is through the Instances interface. The descriptions of the AMIs are more detailed than in the AMI pane. The Launch Wizard guides you through the Instance creation process. You have to choose a name, and then choose the key pair and the security group. You also must select the Instance type, i.e. the virtual machine's computing capacity (RAM, CPU type, disk capacity). 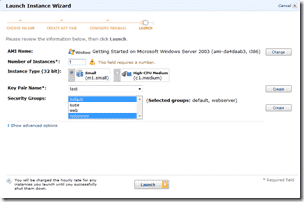 There is one setting that makes you realize you are really working in the cloud and not just with simple virtualization solution: you can specify the number of Instances you want to create. I didn't try it, but I suppose you could just generate 100 virtual servers or so with a mouse click this way. This article claims that requests of 50,000 machines are possible! There is a default limit of 20 Instances per EC2 region (United States and Europe), but you can apply to increase this limit.

During my test, the Instances were launched quickly most of the time. However, every now and then, the Instance's status was set to "pending". Could it be that even the cloud's performance is limited? I have never experienced performance issues once the virtual machine was running, though.

Connecting to an EC2 Instance ^ 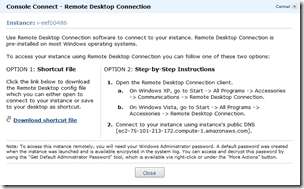 Connecting to a Windows Instance is quite easy. The AWS Manage Console provides a RDP shortcut file that you can download (click on connect). A double-click on the shortcut will establish a RDP connection to the Instance. EC2 creates an Administrator password that is encrypted with your key pair. You can access the password by right-clicking on the instance. Connecting to a Linux Instance is a bit more complicated. Dan Morrill describes in detail how this can be done for Putty and WinSCP.

In my next post, I will discuss EC2 volumes and snapshots.