Paul Schnackenburg  Tue, Feb 4 2020Wed, Apr 15 2020  backup, virtualization  0
Altaro Office 365 Backup secures your Exchange Online mailboxes, the OneDrive folders of your users, and your SharePoint data in Azure. In this article, I provide an overview of this cloud backup solution and show you how to get started with the trial version of Altaro Office 365 Backup.

To (mis-)quote the Bard, "To back up or not to back up – that's the question." Well, there's no question about on-premises. The answer is always back up all business data with the 3-2-1 backup strategy (three copies of your data on two different types of media/device and one copy offsite).

But in the cloud, the answer's not so clear-cut. In Office 365, for the Exchange Online workload in particular, there are four copies of your mailbox data: three spread across different Exchange Mailbox servers and a fourth lagged copy (behind in the copy stream) in a different region. Any server/disk or network failure in a data center is automatically and transparently handled by failing over to another copy of your data and you'll likely never notice. Deleted emails and documents in OneDrive for Business, SharePoint, and Teams are stored in recycle bins for 30 days, in some cases longer depending on your configuration, so that you or the user can retrieve data that's inadvertently deleted.

What Office 365 doesn't do, however, is keep historical copies of your data so that you can say, "Show me what this person's mailbox looked like two months ago on this date." You may have compliance regulations that require this type of backup, in which case you'll need a third-party tool. One very good tool is Altaro Office 365 Backup, released in late 2019, which we'll look at in this review.

This service backs up Office 365 mailboxes, including all emails, attachments, calendars, and contacts, as well as files stored within OneDrive and SharePoint document libraries. Backups can be made up to four times a day, resulting in a low recovery point objective (RPO, or how much data you are willing to lose).

One great feature is that Altaro manages the storage for your data (hosted in Azure), meaning that you don't have to set up and manage your own storage solution. Your data is encrypted with AES 256-bit encryption, and you can keep it for as long as you want.

When it comes to restoring data (remember, an untested backup is worse than no backup at all because you think you are protected but might not be), you can do full restores or just restore individual items (granular restore). As expected, you can pick from the latest backup or from any previous snapshot of the data.

You can restore mailbox data to the original user mailbox or an alternate mailbox, a compressed PST file that you can download and import into Outlook, or a ZIP file with individual EML files for email, ICS files for appointments, and VCARD files for contacts. OneDrive and SharePoint data can be restored to an existing library or can be downloaded as a ZIP file. There's a centralized audit log of all backup and restore actions.

There’s a 30-day trial for up to ten mailboxes available. That’ll result in two emails. The second one has a link to set up access to Altaro's Cloud Management Console (CMC). Here, you'll provide some additional information, such as company name, time zone, etc. Once logged in, you’re presented with the CMC: 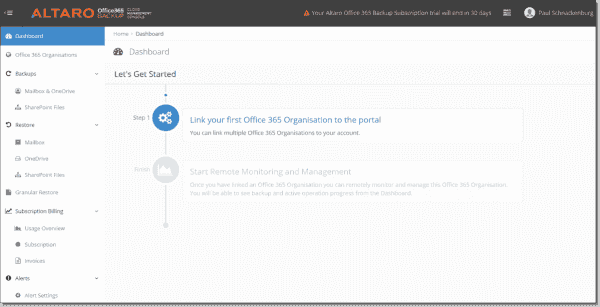 The first step is to link your Office 365 tenant to the backup service. 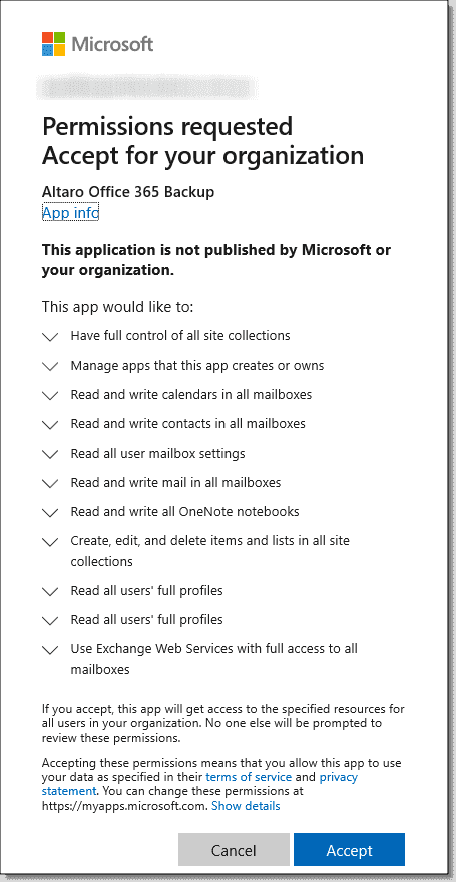 This is followed by Altaro discovering users in the tenant. In my two-user tenant, this took a few minutes. I hope Altaro will improve this speed in the future.

The alerting functionality is good, with tracking for different actions and easily configured email notifications to several people. I would like Altaro to add the ability to configure Webhooks so that alerts can be sent easily to Teams, Slack, or an IT ticketing system.

I really like the ease of setup of Altaro Backup for Office 365. Architecturally, they're doing it the right way with OAUTH permissions and making it a true cloud solution.

Some companies may not like the fact that the data is stored in Azure. The thinking is that it would be safer to store the data in another cloud, should Azure AD authentication or an Azure region be on the fritz. However, the data egress cost could be considerable. By hosting the data in Azure (in many cases, probably right next to the servers hosting Office 365), speed is improved and data egress costs are avoided.

Pricing is a simple per-user, per-year subscription model with either the mailbox-only (39.60 EUR, 43.20 USD) tier or the mailbox-plus-OneDrive/SharePoint (47.30 EUR, 51.60 USD) tier, with a minimum of ten users and increments of ten after that. There are volume discounts and multi-year discounts available. While each user is entitled to 50GB of storage, this is pooled amongst all users so it would be averaged out, meaning that if a user happens to have 60GB of data and another one has 40GB these would both average out to 50GB. Even if these limits are exceeded, it’s at Altaro’s discretion to contact the account admins to decide upon upgrading to more storage based on their requirements.

There are other Office 365 backup solutions, but Altaro's is a very straightforward solution. Veeam (I have used their community solution in the past) requires you to provide your own backend storage, Acronis requires manual configuration of backup jobs, and CloudBerry isn't a cloud-based solution. This last point might be contentious; some organizations may prefer to back up their data to on-premises, but I think that's a vestige of "I want to hug my server." Apart from the large egress costs you may be up for, it's the wrong way to approach backup in the modern era. Let's use cloud for what it's good for, which includes scale and cheap storage.

I highly recommend Altaro Backup for Office 365, especially as there is also an MSP version available.